Common Yeast Species That Can Infect the Human Body

Dr. Vibhuti Rana, PhD says... The information mentioned in this article regarding all the different fungal infection causing yeast species and their related diseases is medically  correct.

Over 1500 different yeast species have been identified and it is believed that they evolved on earth millions of years ago. They are single celled organisms and belong to the kingdom Fungi, which are decomposers. Although they are single celled organisms some of them produce hyphae like roots on a tree, which gives them multi-cellular characteristics.

Their preferred food source is carbohydrates from glucose and fructose, which are monosaccharides. Some species also have the ability to consume disaccharides such as maltose and sucrose. While most of them prefer oxygen for growth, some species can grow without it on a limited basis but oxygen will be required at some point for long term survival.

Although roughly 150 fungal species can be pathogenic to humans, it is known that approximately 65% of Candida species are unable to grow at a temperature of 37°C, 98.6°F, which precludes these species from being successful pathogens or indeed commensals of humans. 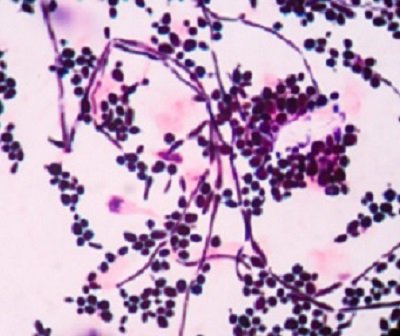 Most species reproduce by budding asexually, or basically by splitting a cell in two to produce a new daughter, although immediately smaller, cell. The smaller cell will continue to grow to maturity before separating off from the original mother cell.

Generally, most yeast species are opportunistic human pathogens and given the right immunocompromised circumstances, all species have the ability to kill a human host. Yeast based infections have become the fourth leading cause of hospital infections and are every bit as bad as bacterial sepsis, which often requires IV antibiotics to save the patient’s life.

I know of two cases where candida yeast got into the person’s blood stream and caused Candidemia. Regarding one such case, you can  read about here. The other died from Candida caused kidney failure.

Here we take a look at the most common yeast species that can infect the human body. Each paragraph will identify the species and will include a link where you can click over and review what it is, some of the symptoms it can cause, what parts of the body it typically infects, and how you can treat it.

It should be noted, that all of these Candida yeast species below build biofilms and you must get rid of these biofilms in order to be successful in treating it. They also have the same basic cell structure. Please see this page for more information on biofilms and the structure of yeast.

Because this page is a work in progress, more species will be added over time for you to review.

Common Yeast Species That Can Infect the Human Body

Candida albicans is a hyphae, pseudohyphae and bud producing yeast species that accounts for 54% of infections in the US and 66% worldwide. It has been suggested that 100% of people have this yeast species in their intestine although a normal level is undetectable using modern medical, stool test, detection methods.

Infected individuals can be infected with more than one biotype of Candida albicans at the same time. 90% of the time strains isolated from the vagina, urethra and anus are the same species. 25% of the time infections with oral involvement are a different biotype than what is found in the intestine.

Candida glabrata does not produce hyphae but does produce spores and accounts for 19% of infections in the US and 11% worldwide. C. glabrata ferments and assimilates only glucose and trehalose, which is artificially produced from corn starch and used as a food additive.

Candida parapsilosis does not form true hyphae and exists in either a yeast phase or a pseudohyphal form. It accounts for 11% of infections in the US and 6% worldwide. C. parapsilosis is often considered less virulent than C. albicans but it is the Candida species with the largest increase in incidence since 1990.

Candida tropicalis forms pseudohyphae with buds and accounts for 11% of infections in the US and 6% worldwide. It is considered to be more virulent than Candida albicans because of its increased potential for tissue invasiveness.

Candida krusei is a budding yeast and accounts for 2% of infections in the US and 2% worldwide. It has natural resistance to fluconazole and has a higher mortality rate than Candida albicans.

Candida guilliermondii is an emerging pathogen that accounts for 1.4% of infections worldwide. It has resistance to fluconazole but does respond well to voriconazole.

Candida rugosa accounts for about .6% of infections worldwide and seems to be the more prevalent in Latin America and India. It is resistant to fluconazole but does respond well to voriconazole.

Candida lusitaniae forms pseudohyphae upon which chains of blastoconidia(buds), develop and is becoming a more prevalent emerging yeast pathogen.

Candida auris first emerged as an ear infection in a 70 year old patient in Tokyo, Japan. Since then it is proving to be a superbug due to its multiple drug resistance.

Aspergillus fumigatus is actually a fungi found in the soil and organic debris all over the world. It produces hyphae and conidia and commonly infects the sinus and lungs of immuno-compromised humans. It requires phosphatase calcineurin for growth, a compound that is required by humans to maintain a healthy immune system.

Cryptococcus neoformans is a basidiomycete yeast found in the environment in soil, tree hollows, and bird excreta. They bear their spores on a basidium, which includes the smuts, rust, mushrooms, and puffballs. It has the ability to survive inside human macrophages and when host defenses deteriorate, it infects its host.

Malassezia also infects the skin and most commonly causes dandruff and seborrheic dermatitis. It prefers the fat from your sebaceous glands for food so it is mostly found on the upper part of the human body which is generally oilier than the lower half of the body. Ketoconazole containing shampoos work well to get it under control.

Rhodotorula mucilaginosa is a unicellular pigmented yeast species that has a distinctive orange/red color when grown on Sabouraud Dextrose Agar in a lab. It has been found in the soil, water, milk, peanuts, apple cider, cherries, fresh fruits, fruit juice, cheese, sausages, edible molluscs, crustaceans, and it has been suggested that contaminated foods could lead to infection. I see this species in the stool test results from time to time.

Saccharomyces cerevisiae is a yeast species that is commonly used to make wine, beer, and for baking. It can and does infect humans since antibodies against it have been found in 60 to 70% of people with Crohn's disease and 10–15% of patients with ulcerative colitis verses 8% in healthy people.

Tinea fungi are dermatophytes and can infect the skin on any part on the body as they grow and infect in dead keratin. Keratin is the key structural material that makes up the outer layer of skin, hair and nails. Other than causing ringworm, they also can infect the nails and are responsible for most cases of toenail fungus. This article details the various types of such infections.

Trichosporon is an asexual yeast species that is commonly found on the skin of humans and other animals. An overgrowth of trichosporon yeasts in hair can lead to an unpleasant but non-serious condition known as White Piedra. These infections can be treated with azole drugs and azole antifungal shampoo with very good success.

There are uncountable diseases that fungal species can cause. While some are easily diagnosed due to their phenotypic manifestation, others may not be understood even by the best of experts. Turner and Butler, in 2014, published an exhaustive article regarding the Candida pathogenic species complex. They said that approximately 90% of infections can be ascribed to five species: Candida albicans, Candida glabrata, Candida tropicalis, Candida parapsilosis, and Candida krusei. (1)

Going into the molecular details, Papon et al., in 2013, published a review in PLoS Pathogens. This review shows that the Candida species C. tropicalis, C. parapsilosis, C. guilliermondii, C. lusitaniae, C. famata, C. rugosa, and C. dubliniensis form part of the Candida CTG clade and translate CTG codons as serine instead of leucine. The C. glabrata and C. kefyr species belong to the Saccharomycetaceae, with C. glabrata and S. cerevisiae falling within the whole genome duplication (WGD) clade. The rest of the species C. krusei, C. inconspicua, and C. norvegensis are most likely closely related to the Saccharomycetaceae clade, which could furnish details with respect to azole resistance. (2)

Very interestingly, studies report that Candida albicans forms hyphae that are induced within phagosomes. This activates a certain type of programmed cell death known as “pyroptosis”. This involves rupturing of phagosomes to kill the innate immune cells that would have otherwise protected the host! (3)

Most recently, Candida auris has been declared as an emerging multidrug-resistant type of Candida that poses a serious global health threat, including in the United States. It spreads easily in healthcare facilities and has been shown to cause serious health issues. (4)

Have Any Questions About These Yeast Species?

Do you have any questions about any of these yeast species or yeast infections in general? Ask your question here or contact us using the contact page of this website. It is also always a good idea to talk to your doctor as well.

What antifungals are suggested for Candida tropicalis in mouth and throat?

My tongue is coated and I have a persistent cough with white, sticky, foamy phlegm accompanied by chronic sinus drainage. The infection is very resistant …

I have had this infection for decades. It is very bad smelling, itches and is damp. Any information would be helpful. Thank-you, G Roy.