In the 1990's a novel Candida species called Candida auris was discovered, but remained unnamed until 2009 when an infected ear canal of a 70 year old patient from Tokyo, Japan was reported (1). This fungal opportunistic pathogen has gained relevance due to its rapid rise in nosocomial infections in critically ill patients. While invasive Candidiasis was the domain on Candida albicans until a few years ago, several non C. albicans Candida species have slowly risen and raised concern in the medical community. This article will take you through the details of Candida auris, an emerging fungal species that potentiates the use of alternative anti-fungal treatment strategies, especially in critically ill patients.

The prevalence of C. auris has been seen in all parts of the world. If we look at its geographical occurrence the strains and infections of C. auris have been reported in India, Israel, South Africa, Colombia, the United States, Canada, Norway, Germany, Pakistan, and Oman amongst some other countries (1). Moreover, this pathogen has targeted the pediatric and adult population alike. The genomic sequence of C. auris has also identified a number of genes playing role in biofilm formation, transporter functions, and protein kinases, which may help them to acquire drug resistance (2). 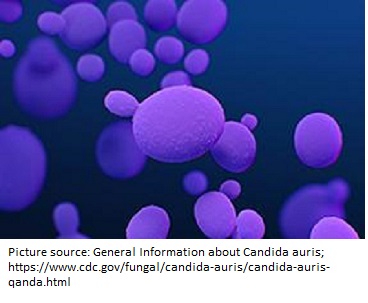 As far as its growth characteristics on media are concerned, C. auris forms beige or pink colonies on chromogenic agar Candida medium. It can grow well at 42°C shows inhibition in the presence of 0.01% cycloheximide (3). While no hyphal forms are known for this species as yet, studies have shown it to grow as a single cell or in groups of elongated yeast cells. Some nucleic acid based methods like molecular sequencing, Polymerase Chain Reaction (PCR), MALDI-TOF mass spectrometry can be used. The only disadvantage with these techniques is they are expensive and time consuming.

Fungal pathogens have the ability to create genetic diversity due to multiple reasons- first, some have true meiotic cycles that generate diversity via homologous recombination, while others have evolved mechanisms of producing diverse offspring that do not depend on meiosis. Candida albicans has a parasexual cycle, where two diploid cells fuse followed by concerted chromosome loss, rather than meiosis, to result in viable, but often aneuploid, progeny. Parasex generates genetic diversity and enables adaptation to stressful environments (9).

Another reason for genetic diversity could be Karyotype variability, including chromosome rearrangements. It is common in fungi and could be a basis for genetic diversity leading to phenotypes with enhanced fitness. A study conducted on genetically identical C. auris isolates from a hospital outbreak revealed similar karyotypes, thereby indicating that genome rearrangements do not play a major role in quickly establishing genetic variability within individual outbreaks (10).However, passaging C. auris through several rounds of various stresses generated massive karyotype changes. Moreover, there does occur variation in karyotype between C. auris isolates from different clade indicating that genome rearrangements are indeed a potential mechanism to generate variation as has been described for other Candida species. Thus, determining the origins of genetic diversity in this dangerous human pathogen will potentially elucidate evolutionary mechanisms behind its virulence and antifungal drug resistance.

Difficulty to identify C. auris, antibiotic resistance, and a plethora of virulence factors, make the mortality rate high in infected individuals. Therefore, we need to necessarily look at the underline mechanisms of pathogenicity. It has been observed that C. auris evades the response of the innate immune system by disabling neutrophil extracellular traps (NETs). C. auris has multiple other virulence factors, including lipases, mannosyl transferases, oligopeptide transporters, and the ability to develop a biofilm.

Lipases are a catalyst for the hydrolysis of ester bonds of triacylglycerols, which allows fatty acids to be released. Candida species use these to destroy epidermal and epithelial tissues. The glycosyltransferase - mannosyl transferase, is also very important as it aids in the adhesion of C. auris to the epithelium of its host and other clusters of C. auris. Known virulence factors and difficulty with the identification of C. auris have made this fungus incredibly dangerous when it infects a host, but arguably the most concerning part of C. auris is its high resistance profile against popular antifungals.

Why is Candida auris so Difficult to Treat?

The major concern with C. auris is drug resistance. It is a multi-drug resistant species, meaning it shows no effective sensitivity against multiple anti-fungal agents and has limited clinical and therapeutic management options. Due to these reasons it is also considered to be a “superbug”. Over 90% of known strains of C. auris are resistant to fluconazole while up to 73% of strains are resistant to voriconazole. Another study found that selected isolates of C. auris were resistant to the common last resort drug amphotericin B at a rate up to 35%. Fortunately, C. auris is still susceptible to multiple other triazoles and the majority of echinocandins. The exact molecular mechanism causing antifungal resistance is not yet elucidated but few studies point towards over expression and mutation in few key genes. It has been found that Ergosterol is the major component of the fungal membrane and is a target of many anti-fungal drugs (4,5). In case of C. auris, mutation has been found in the enzyme that is essential for the production of ergosterol.

Another underline reason which might contribute to virulence and anti-fungal resistance is biofilm formation. Biofilm-formation ability varies across C. auris isolates and clades (6). Although both the aggregated and non-aggregated C. auris cell types are able to develop biofilms, the latter have been shown to form more robust biofilms. Thus, targeting biofilms can lead to development of better therapeutic approaches against C. auris. Another reason that explains the wide range of resistance is due to the overexpression of adenosine 5'-triphosphate (ATP)-binding cassette transporter (ABC) genes that were discovered in the C. auris genome. ABC transporter genes use ATP binding and hydrolysis to provide energy for the translocation of substrates, which leads to increased expulsion of the drug out of its cells (7). Therefore, the more the level of the ABC-coding genes, the more is the amount of drug being pushed out of the cells, preventing any possible therapeutic efficacy.

There are some categories of people who are quite susceptible and form the high risk-group to contract C. auris infections. These include critically ill patients who have been catheterized or subjected to tubing in different parts of their bodies, have undergone antifungal treatment course, or stayed in the intensive care units of hospitals for prolonged periods.

To study the pathogenesis and biology, some effective animal models are needed. Mice models and invertebrate models using the fruit fly Drosophila melanogaster and nematode Caenorhabditis elegans have been used to evaluate C. auris pathogenesis and the effects of antifungal therapies on treating C. auris infections (8). Out of the two model systems used, invertebrate animal infection models is more useful in providing a fast and inexpensive means to study pathogenesis and antifungal resistance in C. auris.

How to Prevent and Control C. auris Infection?

Apart from drug resistance, another characteristic which makes C. auris an epidemiological important micro-organism is its rapid spread. So, some basic control measures need to be taken once the case of C. auris is detected. Guidelines have been set regarding the isolation of patients, contact precautions, and cleaning of equipment and environments in contact with affected patients. Prompt notification to public health authorities and education of healthcare workers on the clinical impact of C. auris are also of paramount importance. In cases, where patients needs to be moved to other healthcare facilities, notification of C. auris colonization/infection status is recommended. Because of the same reasons, screening of patients coming from geographical areas and healthcare facilities with a high incidence of C. auris infection/colonization at the moment of hospital admission is of utmost importance.

C. auris can colonize on the skin, nails, and body parts of the infected individuals. Currently, no decolonization protocols are available, thereby worsening the transmission of the disease (11). It can also persist in the environment for a long time and contaminate the medical facility and its instruments. Devices or equipment which are used frequently can be a major source of transmission, so regular cleaning protocols must be in place. Decontamination and cleaning of the facility at regular intervals can help control the transmission of the disease. Surface disinfectants like chlorine and hydrogen peroxide have shown promising results against C. auris while disinfectant like quaternary ammonium compounds don’t work (12,13).

To conclude, Candida auris is the new bug that possess a lot of health threats across the globe. This species has many unique characteristics in terms of biology, genetics, epidemiology, antifungal resistance, virulence, host adaptation, and transmission. There are many questions which are unanswered and require further investigation. For example, how did multiple drug resistance evolve in the species, what factor allows the species to remain active for a longer period of time in clinical settings? Rapid research targeting these question needs to done along with development of accurate and precise measures to identify and differentiate C. auris from other strains. Thus greater knowledge in this field will help make more significant impact on future outcomes for the infected patients worldwide.