Do Enzymes For Yeast Infection and Candida Really Work?

Enzymes for yeast eat the cell wall of Candida and other yeasts because the cell wall is composed of fiber and glycoproteins. Many times the patient will not experience any die-off reaction at all, especially when using an enzyme that contains protease, which is a huge bonus.

Lets review the basic cell and biofilm structure of yeasts. 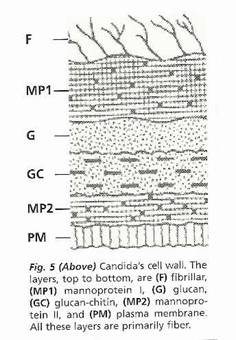 A mannoprotein is a complex carbohydrate-modified protein used by yeasts to anchor the proteins to the cell wall glucans.

Glucans are a polysaccharide fiber, that are found in the cell walls of bacteria, fungi, algae, lichens and plants such as oats and barley.

Chitins are long-chain polymer of N-acetylglucosamine, which is a derivative of glucose. It is a primary component of fungal cell walls and the exoskeletons of arthropods. It is very similar to the polysaccharide cellulose - the basic fiber component of plant cell walls.

The plasma membrane is a fatty lipid and protein layer and the nucleus of the yeast cell is also made of protein.

Knowing that the cell wall of Candida yeast is made up of proteins with carbohydrate rich fibers including a protein and lipid nucleus, a properly designed enzyme formula should contain the necessary enzymes to digest all of these parts.

Biofilms are used by pathogenic yeasts, bacteria and viruses as a way to hide from the hosts immune system. At the same time the pathogen will release spores or cells in an attempt to spread throughout the body. Upon release of the spores the immune system mounts a defense, which causes inflammation and can make you feel sick.

It will be composed of cellulose, which is basically a chain of polysaccharide fibers.

The biofilm will also contain polynucleotides that are made from bonded sugars and are primarily its dna and rna material.

The biofilm also contains fibrinogen and fibronectin or scar tissue, which are the same materials that the body uses to clot the blood and repair wound sites.

All of these materials are bound together by ligands with stickiness properties much like lectins in wheat.

The biofilm will form in the section of the picture above marked F. The biofilm is the first thing you need to get through in order to have any effect on the yeast cell itself.

So, the biofilm is made from proteins, with carbohydrate rich fibers much like the cell wall. In addition, microorganisms such as bacteria and yeast use fibrinogen and fibronectin to adhere and make biofilms with the help of fibronectin binding proteins present in these microorganisms. More on the cell structure and biofilms here.

Enzymes Needed for The Best Results

The glucans and cellulose-chitin found in both the cell wall and biofilm you need cellulase and hemicellulase. Beta-glucanase is also very helpful but a quality cellulase will have beta-glucanase side activity so you're covered in that respect.

The polysaccharides found in both the cell and biofilm can be removed with amylase, invertase and glucoamylase.

For the fatty lipids a lipase enzyme would work.

Do Enzymes for Yeast Really Work on the Cell Wall?

Way back in 1968 Roberte Domanski and Ruth Miller from the Dept. of Microbiology at the Women's Medical College of Pennsylvania, used a chitanase complex and beta-glucanase on the cell walls of Candida albicans. Within 5 minutes of exposure to the enzymes in the presence of water, the cell walls burst. Note the intact cells in picture 1 and the disrupted cell in picture 2.

In 1971 Canadian scientist Joseph Brown analyzed the helicase enzyme from the snail Helix pomatia, effects on the cells of Torulopsis glabrata, Candida albicans, and Saccharomyces cerevisiae. He noted that the effects of the enzyme on Candida glabrata wore off in a couple of hours as the fungi adapted to the effects of the enzyme. It took much longer for the other two yeast cell walls to adapt to the enzyme.(Source)

In 1976 the effects of enzymes on the cell surface of Candida Albicans was examined at the Department of Biochemistry, The University, in Leeds. Beta-glucanase worked well but major changes took place with the addition of chitanase and protease, which resulted in the greatest disruption of the cell wall.(Source)

In 1980, E. F. Gale and associates ran enzyme studies on the cell structure of Candida albicans to see if they would help reduce the organisms ability to resist Amphotericin B. They found that beta-glucanase had the greatest effects on the cell wall. They also found that the effects were further enhanced when using chitinase, trypsin - which is a protease, or lipase.(Source)

In Sept of 2017, a study was performed in South Korea at the College of Agricultural and Life Science on the fungi Fusarium oxysporum and Rhizoctonia solani. Chitanase and Beta-glucanase enzymes were used to see if they had any effect on the cell wall structure. The enzymes were found to inhibit hyphael growth of these two species.(Source)

Because Candida yeast is also a fungi with similar cell structure, there is no reason to not believe that these enzymes would not work on hyphael producing strains of Candida.

What have we learned from these studies?

The obvious conclusion, based on the uses of these enzymes singularly and when combined, is to use an enzyme formula that has all the necessary enzymes required to digest every component of the cell wall. The studies suggest that complete formulas are going to have the greatest effects.

Do Enzymes for Yeast Really Work on the Biofilm?

Yes they do and they work extremely well. They also work for bacterial biofilms as we're going to prove to you. This is very important because half of the stool tests we see show no yeast but over growths of pathogenic bacteria.

A published study in 2006 that was done at the Institute of Biomedical and Life Sciences in Glasgow, Uk; used multiple enzymes to see what effects they had on the biofilms of both Candida albicans and Candida tropicalis.

Beta-glucanase more easily detached Candida albicans biofilms from plastic surfaces. Protease, the cellulases, and glucoamylase partially detached the biofilm. Candida tropicalis biofilms were only affected by lipase and the chitinases. They also noted that the biofilms definitely contributed to increased drug resistance.(Source)

A 2017 study done at the Medical University in Vienna, Austria on the biofilms of Candida albicans using beta-glucanase only; had no effect on its growth but reduced the biofilm by 56%. This greatly enhanced the ability of Fluconazole and Amphotericin B to clear the infection.(Source)

The same doctors in Vienna ran another study to monitor the effects of beta-glucanase on the biofilms of Candida tropicalis, Candida parapsilosis and Candida krusei. They observed a reduction in the biofilm of 60%, which greatly enhanced the effects of Amphotericin B. The enzyme had no effect on these species of yeast growth characteristics.(Source)

This study done by Loiselle M, Anderson KW at the Department of Chemical and Materials Engineering, University of Kentucky, on the biofilm of the pathogenic bacteria Pseudomonas aeruginosa using the cellulase enzyme, showed a marked reduction in the film. The authors noted that using additional enzymes with the cellulase would probably increase the effectiveness, which is what we have suggested all along.

In 2011, the Max Bergmann Center of Biomaterials in Dresden Germany did a study on the biofilms of Pseudomonas aeruginosa and Staphylococcus epidermidis. They used glycoside hydrolase's, which include the enzymes cellulase, hemicellulase, and amylase. They also used subtilisin A, which is a protease enzyme derived from the bacteria Bacillus subtilis.

A 2013 study on the bacteria Burkholderia cepacia that typically infects people with medical implants, was done at the Department of Microbiology, PRIST University in India. They used the cellulase enzyme and noted "significant anti-biofilm activity".(Source)

In 2017, a study was performed at the University of Porto in Portugal on the biofilms of the pathogenic bacteria Pseudomonas fluorescens. The enzyme beta-glucanase, amylase, lipase and protease were used both by themselves and in combination. A modest removal of the biofilm was observed with protease having the greatest long term effects.(Source)

Another 2017 study done at Institute of Fundamental Medicine and Biology in Russia, tested protease on the biofilms of the Staphylococcus aureus and Staphylococcus epidermidis bacteria. Biofilm thickness decreased 200% within 24 hours of exposure to the protease. The amount of antibiotics then needed to clear the bacteria decreased three fold.(Source)

Do the Enzymes Work on the Fibrinogen and Fibronectin in the Yeast Biofilm?

This is where serrapeptase comes in, it literally eats these substances which are basically scar tissue.

Because this enzyme digests non-living tissue and leaves live tissue alone; it has been found to be effective in removing the deposits of fatty substances, cholesterol, cellular waste products, calcium and fibrin on the inside of the arteries. The fibrinolytic clot removing activity of serratiopeptidase may also be able to help with thickened blood, increased risk of stroke, and phlebitis/thrombophlebitis.

It's been reported to have an effect on sinusitis and bronchitis, atherosclerosis, carpal tunnel syndrome, rheumatoid arthritis and other autoimmune diseases.

It is also highly anti-inflammatory and has been used in Japan since 1957 for many inflammatory conditions.

And of course, it has been shown to help strip biofilms.

I could go on and on here folks but I think at this point, you get it. Especially when you consider these enzymes have been studied repeatedly, and have been found to be effective, since 1968.


What have we learned from these biofilm studies?

The things mentioned in the article about the components of Candida cell structure and biofilm are correct.

I have already given my commentary regarding yeast enzyme Biofase and others. This is a similar article that talks about the yeast enzyme components and their respective roles. In addition, the above article gives a detail about the yeast cell structure and its components along with the components of plasma membrane. Basically, cell wall are made up of carbohydrates and proteins, and play a vital role in recognition of immune cells inside the host, and adhesion to the host cells.

An article that was published in 2012 in Current Opinion in Microbiology gives a detail information about how a commensal Candida can turn into a pathogen and how its cell structure help it in this transition to establish infection and express virulence factors.(1)

There is a paper published in 2018 in Genome Biology and Evolution that details about a hypervirulent strain of Candida and its genomic comparison with other Candida to give an idea about its evolution. It has been shown that the particular strain harbors many genes related to pathogenesis.(2)

Yet another paper published in 2017 in Journal of Fungi gives a detail about the composition of the biofilms of Candida. Biofilms are composed of carbohydrates and proteins in addition to lipids and nucleic acids. By forming biofilms, Candida hides itself into the protection of the biofilm and becomes resistant to many antifungal agents.

What enzyme for yeast brands are the best to use? See our review here