This article deals with Candida krusei, a fungal opportunistic pathogen that is emerging to be a significant health concern. We all understand by now that Candida albicans has been frequently associated with majority of fungal yeast infections in human hosts (roughly 70%). However, we must also realize that the remaining infections are attributed to the non C. albicans species including Candida glabrata, Candida tropicalis, Candida parapsilosis, and Candida krusei. According to the survey of patients enrolled in the Prospective Antifungal Therapy Alliance (PATH Alliance®) published by Pfaller et al, the five most common fungal yeast pathogens posing grave epidemiological concern to the society are C. albicans, C. glabrata, Candida tropicalis, Candida parapsilosis, and Candida krusei (1).

C. krusei is responsible for many systemic and local fungal infections, portraying a crucial impact of the fungal pathogenesis. Did you know that different strains of the fungal diploid, opportunistic, pathogen C. krusei are used commercially in the production of chocolate from cacao beans? To make it clear, the sexual state of C. krusei (Pichia kudriavzevii) yeast species uses its degradative enzymes to break down the beans and produce specific aromas and flavors (2). Pichia kudriavzevii is also a promising producer of bioethanol and phytase (3). 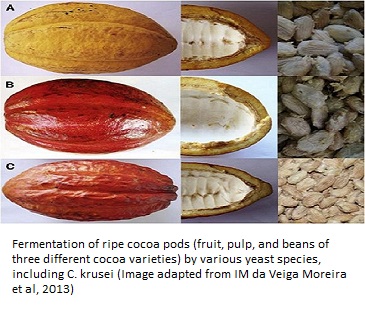 The sequence analysis of the C. krusei genomic DNA in comparison to other Candida yeast species revealed C. krusei to possess a number of transporter genes that could be answerable for the highly drug resistant character of this pathogen. The analysis of the mating type genes suggests that C. krusei is more related to the budding yeast Saccharomyces cerevisiae as compared to the family of other Candida species. In terms of appearance, C. krusei has elongated blastoconidia (length upto 25 µm) and these cells look like match sticks. C. krusei has the capability of growing in the absence of vitamins in the media. It exhibits pink colored rough colonies on CHROMagar (5).

Cuomo et al, while doing the whole genome analysis, found that C. krusei has common genes belonging to the C. albicans pathogenic gene families, but in fewer copies. These included genes encoding for oligopeptide transporters, aspartyl proteases, and phospholipase B genes (2). Researchers have found that the CDR1, CDR2, and other genes encoding some drug transporters are present in the genome of C. krusei and could reveal the possible mechanisms that make C. krusei a highly fluconazole-resistant species. Recently, C. krusei invasions have been implicated in endocarditis, ocular infection. For the first time in 2006, an immunocompetent heroine-drug abuser was shown to have developed soft tissue invasion by C. krusei, which was unheard of so far (6).

Though it may stay as a commensal yeast without harm in the human microbiome under normal conditions, C. krusei has the ability to adhere to human host cells to subsequently cause invasion. In addition, it also sticks to abiotic acrylic surfaces like catheters and prosthetic devices with a much greater affinity as compared to human cells like HeLa and buccal epithelial cells (7). This feature makes it a successful invader in both surface fungal infections as well as systemic candidiasis. Besides, a report also showed how repeated inoculations of C. krusei in immunocompromised rats could lead to oral or lingual candidiasis (8).

Though it may sound unfamiliar or unusual, C. krusei has been a debated cause of virulence in vulvovaginal candidiasis that is characterized by discharge, inflammation, burning, soreness, or edema. In 2002, a study that proved the role of C. krusei in this context was conducted by Singh et al in females having recurrent fungal vaginitis and who were treated by different antifungal agents. It demonstrated that C. krusei was the cause of relapsing vaginitis and required alternative modes of treatment due to its high resistant towards fluconazole-the primary drug of choice of vaginal candidiasis (9).

After vaginitis, fungal Urinary Tract Infections (UTIs) have also been seen in patients infected with C. krusei. Besides immunosuppression, key factors which predispose patients and neonates to fungal UTIs are low birth weight, history of prolonged antibiotic exposure, parenteral alimentation, and use of intravenous catheters (10).

Another area where C. krusei has caused serious health threats is Candidal arthritis of knee, hip, shoulder, ankles, or other joints. It is one of the nine candida species that have been found to cause this problem, especially in the patients who have been treated with intra-articular corticosteroids. Such patients experience excessive pain, swelling, inability to bear weight and have to succumb to restricted movements (11).

In fact, C. krusei infections have also been implicated in pediatric arthritis in neonates. This is probably due to spread of fungal infection (invasive candidiasis) via blood. Esophageal candidiasis has also been seen in C. krusei infected patients with immuno compromised status. It is shown that almost 50% of the HIV infected patients displaying esophagitis symptoms is attributed to infections by Candida species (12).

Who Can Get Infected With C. krusei?

Unlike C. albicans, C. krusei does not infect individuals very frequently (around 2% only). Alarmingly, the 90-day survival rate for such C. krusei infected immuno-challenged patients is the lowest (53%) among all Candida species infections (13). Moreover, the most significant thing to worry about here is its high level of resistance to the available antifungals.

People who are treated with a wide array of antimycotic agents, including topical medicines may have caught an unnecessary and huge exposure to these azoles (like fluconazole and miconazole), resulting in C. krusei infections. In another scenario, it could be possible that patients might have been exposed to the intrinsically resistant C. krusei strains, leading to treatment failures and recurrent episodes of candidiasis (9).

There are a few categories of people who should be cautious of such infections. Its growth and multiplication is favored in immunocompromised hosts. Unlike other yeast species of the genus Candida, C. krusei displays many unique properties and differs substantially from the rest of them.

Patients who have a weak immune system and are not able to defend themselves from common infections are the primary target for C. krusei infections (14). This includes transplant-recipients, heart patients, and those who have had a history of blood-related tumors or leukemia (hemato-malignancies). Therefore, it is clear that this less pathogenic species of Candida targets people with leukemia, bone marrow transplants, and HIV co-infections, with medical device implants, with a history of oral/other anti fungal agents exposure, and endocrinal imbalance.

Are the Resistance Mechanisms of C. albicans and C. krusei Different?

Reports from different studies show that C. krusei does not have the resistance conferring mutations (against azole drugs-the first line of antifungal defense) that are found in the genes of C. albicans. This clearly implies that the mechanistic machinery of natural resistance which is present in C. krusei is different from the acquired resistance shown by C. albicans isolates.

The relative pathogenicity of the two species in rat oral mucosa in the form of mucosal candidiasis was studied in 1998 by Samaranayake et al and published in the Journal of Medical Microbiology. This study showed for the first time that though the rates of infection in C. albicans are greater than C. krusei, the latter is equally capable of colony formation by using its pseudohyphae and infecting host cells, especially when they are immunocompromised (8).

The drugs which are generally effective for other Candida yeast species do not work effectively against C. krusei due to its high innnate resistance. Because C. krusei is mostly resistant to the azole class of drugs owing to its intrinsic genetic make-up, studies are exploring other alternatives for the treatment of the infections caused by this yeast species.

The journey of finding a new drug for treatment began in 1997 with L-743,872, which was a broad spectrum anti fungal drug belonging to the pneumocandin category developed by Merck Co. It was found to be effective in reducing the C. krusei and C. glabrata fungal load in both immunocompetent as well as immuno-compromised mice models in comparison to fluconazole that was only effective against the infections in immunocompetent mice (15, 16). This was introduced as Caspofungin acetate later, which is widely used in the present times for anti-candidal therapies.

For recurrent vaginal candidiasis due to C. krusei, it is speculated that a prolonged treatment using topical boric acid or topical clotrimazole should be preferred. Alternatively, oral therapy with ketoconazole or itraconazole could be used for women suffering from C. krusei vaginitis (9). In fact, all the antifungals which are being used and show positive results should be given for a longer period for around six weeks for effective and non-recurring results. In cases of candidal arthritis, intravenous antifungal treatment is preferred for effective recovery.

In a study in non-mammalian host models infected with C. krusei, it was found that the fluconazole was the least effective drug for treatment of infected models in comparison to amphotericin B, voriconazole, or caspofungin. Moreover, the doses of these drugs used were much higher for eradicating Candida krusei than the dosed used to treat C. albicans (17).

Obviously, the drugs have to chosen very carefully to escape from the problem of resistance. So, it is our duty to maintain vigil regarding different fungal infections which pose serious threats to public health.

If you have any questions about Candida krusei or yeast infections in general, please feel free to contact us through the contact page of this website or see your doctor.