For hundreds of centuries, the budding yeast Saccharomyces cerevisiae has been exploited by mankind for brewing, wine making, and baking purposes. The famous French biologist and chemist Louis Pasteur first found its role in alcohol fermentation in 1857, which brought about a revolution in the field of yeast genetics. Even though this fungus is more than a hundred years old, it was only in 1996 that the newer techniques of DNA analysis and genomics enabled Goffeau et al to publish its genomic DNA sequence bearing almost 6000 genes in the October issue of Science (1).

S. cerevisiae is found in a number of environmental habitats like soil, oak tree bark, damaged grapes, etc. Interestingly, a Chinese study in 2012 found that out of 2064 samples collected from numerous environmental sources, the presence of this fungal species was detected in 11%, with a very high genetic diversity as compared to its laboratory grown counterparts (2). 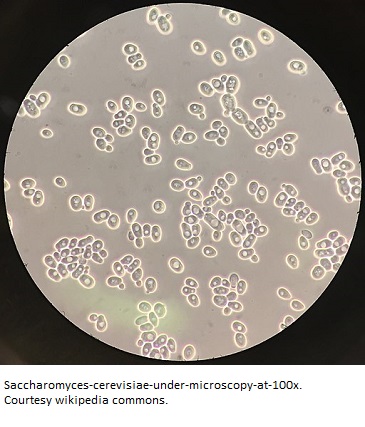 Another host for harboring S. cerevisiae cells is insects, mainly wasps and the fruit fly Drosophila. In fact, the queen of the social wasps can transmit this yeast to its offspring by reserving it inside its body from autumn to spring of the next season! The wasp gut microbiome (microbe species composition of wasp gut) has shown 4% occurrence of S. cerevisiae, though lesser than Candida or Pischia species (3, 4) and has made quite an important contribution in shaping the Saccharomyces cerevisiae evolution.

This species also modulates the immune response towards bacterial infections by altering the gut microbial community composition in the social paper wasps. It also exists as a benign commensal organism in various sites of human body like mouth, respiratory tract, gut, and urinary tract.

The “make-accumulate-consume” strategy of this fungal species makes it quite unique and important among its family members. It produces ethanol and other two-carbon compounds via pyruvate pathway and upon ethanol accumulation, it eliminates the competition with other species sharing its ecological niche. Subsequently, it consumes and uses this ethanol for its own growth and proliferation (5). These features of the fungus enable its use in a number of industrial aspects, including food industry, wine/beverage production, and biofuel production.

Saccharomyces  cerevisiae yeast industries is one of the largest in the European countries. It is used in making of various distilled and fermented beverages like wine, beer, rum, vodka, cider from different sources. It plays a remarkable role in bread and sourdough manufacturing on large scale. This practice started way back in the 18th century in England when leftover yeast from a winery was used to produced bread. Due to its utmost importance as a raising agent in bread making industry, it is commonly referred to as the “Baker’s yeast” (6).

Importance of S. cerevisiae in a Laboratory

Even though it comprises of just a single cell, in research, Saccharomyces cerevisiae in the most successful eukaryotic model. This unicellular eukaryote (meaning-its more similar to plants and animals in terms of cellular structure and functioning), serves as a powerful model organism for experimental purposes. Moreover, genetic editing flexibility and a short doubling time of 1.5 to 2 hours at 30°C makes it ideal for experimental studies. Owing to its short generation time, easy handling, non-pathogenic nature, cost-effectiveness in culture maintenance, and its convenience for gene manipulation, it is best suited for experimental studies of eukaryotes.

Its small size and ideal freezing properties have also promoted its use in electron microscopy-based experiments. Due to all these factors, it has been exploited to address major disease-related biological issues and bring about phenomenal discoveries in microbiology and biochemistry. Did you know that due to its intrinsic properties, this yeast species is quite successful as a model organism that it has even helped to decode the mechanistic intricacies of the neurological disorder Parkinson’s disease (7)?

It has also been recorded that this yeast can accumulate trehalose, which is generally high when there is no glucose, nitrogen, sulphur, or phosphorous; meaning that it tends to reserve any available carbon sources of energy under nutrient deprived stress conditions (8).

In general, some fungal species that are mostly related to fungemia and systemic infections are Candida albicans, Candida tropicalis, Candida glabrata, Candida parapsilosis, Cryptococcus neoformans; and a little less common are the emerging pathogens such as Malassezia furfur, Trichosporon beigelii, Rhodotorula species, Hansenula anomala, Candida lusitaniae, and Candida krusei. Until recently, S. cerevisiae was considered to fall in the GRAS (generally regarded as safe) category (9).

You would be surprised to know that heat killed attenuated strains of S. cerevisiae are given as vaccines to provide immunity and protection against other mycotic diseases like aspergillosis and coccidioidomycosis (10).

In an article published in the Frontiers in Microbiology in 2020, authors discuss that the vaginal bacterial microflora is mostly Lactobacillus species while the fungal microflora consists of the right balance of Candida, Saccharomyces, Aspergillus, Cladosporium, and Alternaria. Many vaginal infections like vaginal candidiasis and bacterial vaginosis can be treated with a pharmaceutically prepared yeast probiotic combinations (especially S. boulardii and S. cerevisiae) when the conventional antifungal treatments are not much effective (11).

Keeping its therapeutic benefit aside, its ability to switch from the harmless, non-pathogenic yeast form to the pathogenic hyphal and pseudohyphal form (a term known as phenotypic switching) is of great concern while addressing S. cerevisiae infections. Other phenotypic virulence associated traits of this fungus include its ability to grow at 42°C, some hydrolytic activities like production of phospholipases and proteases, pseudohyphal and invasive growth, and adhesion to polystyrene petri dishes and polyurethane catheters. Therefore, you can no longer call it a completely innocent fungus (12, 13).

A very old study linked the consumption of a dietary nutritional supplement in a man (containing >10 million spores of S. cerevisiae per gram) with fever and infection (14). Using molecular techniques of species identification, S. cerevisiae-associated fungemia was also identified in the blood of 4 cultures of Baker’s yeast and S. boulardii therapeutic strains (15). Another study conducted by Llopis et al in mice using five of the important and commercially used dietary strains of S. cerevisiae.

While two of the strains showed low virulence, one strain had severe effects on the immunocompromised mice models, leading to death by brain and kidney damage. In simpler terms, some of the strains of this yeast may be could even result in life threatening infections. So, even the industries need to be super careful while selecting their strains for dietary consumption (12).

In 2005, three patients admitted to the ICU of a tertiary care hospital at Madrid, Spain, who were being given parenteral or enteral nutrition of the yeast probiotics, showed blood infection by Saccharomyces cerevisiae. Culturing of the probiotic capsules being given to these patients as a treatment option for Clostridium difficile associated diarrhea showed S. boulardii as the main ingredient. This led to S. cerevisiae fungemia, which could only be reduced and treated when these probiotics were permanently discontinued (16).

Some conditions such as fungemia, endocarditis, pneumonia, peritonitis, urinary tract infections, vaginitis, skin infections, and esophagitis have been described in literature, marking its important role in causing systemic or local yeast infections. In a 2007 study published in Case reports in Infectious Diseases, a female suffering from cancer of the larynx (in the vocal chords) showed oral tongue lesions. Earlier presumed to be Candida-based lesions on her tongue, it was ultimately revealed by culture identification techniques that Saccharomyces cerevisiae had resulted in her laryngitis (17). 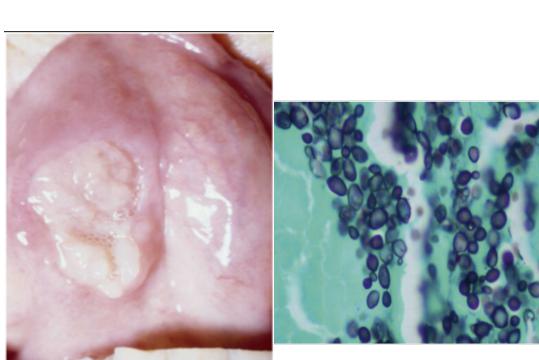 It is important to know if we are at risk of developing such infections. Fortunately, most of the time, Saccharomyces cerevisiae targets the host whose immune system is weakened. Very rarely, it may target the immuno competent healthy hosts.

The factors that attract S. cerevisiae-mediated infections include long term usage of broad-spectrum antibiotics, weakened immunity due to immuno suppressant drugs, recipients of organ transplants, individuals with long period of catheterization, and HIV-AIDS patients. Generally, patients admitted to the ICU for long periods fall in these categories. Intake of oral or parenteral probiotics (S. boulardii) may also give rise of S. cerevisiae blood infections.

How Easy is it to Treat S. cerevisiae Infections?

Saccharomyces cerevisiae has been generally considered as a health-associated microbe, and used in bread and wine making. However, numerous researchers across the world started doubting this as more and more cases of S. cerevisiae infections in human blood were identified.

As I have mentioned in the previous sections, doctors must also be careful while using Saccharomyces boulardii as a probiotic supplement. Once regarded as a safe agent, many studies support the fact that it’s use while treating immuno suppressed patients may result in Saccharomyces cerevisiae associated fungemia.

One should also be wary of this yeast as it also shows resistance at a high rate towards existing commonly used antifungals such as fluconazole (13). A drug susceptibility testing experiment has also shown high minimum inhibitory concentrations (MICs-the least dose of a drug needed to inhibit microbial growth) for fluconazole and itraconazole and comparatively moderate MICs for amphotericin B and flucytosine (18). This suggests that treating of Baker’s yeast-mediated fungal infections would give more effective results with the use of amphotericin B or flucytosine as compared to fluconazole or itraconazole. A few other agents to which this yeast is sensitive are ketoconazole, voriconazole, posaconazole and isavuconazole.

Therefore, emergence of this harmless species into one of growing concern calls for more innovative ideas to tackle it and find effective ways of therapeutic clearance of infection.

You can learn more about Dr. Rana on this webpage.

Back to S. Boulardii, Proven Benefits and Safety Issues

Any questions about Saccharomyces cerevisiae or yeast infections in general, please feel free to contact us from the contact page of this website or see your doctor.