Saccharomyces boulardii or S. boulardii has been used for the last 30 years or so to treat antibiotic associated diarrhea with pretty good results. It has also been used to treat diarrhea caused by Clostridium difficile and Traveler's diarrhea. Numerous clinical studies have been run to see if it works for Crohn's disease, Helicobacter pylori, ulcerative colitis, irritable bowel syndrome, parasitic infections and HIV-related diarrhea. It's also been used to treat Candida yeast infections and I am going to get into those results in a little bit.

Luckily, a comprehensive study was published in Therapeutic Advances in Gastroenterology in 2012 that we can refer too, to see just how effective S. boulardii is for intestinal problems. (2) 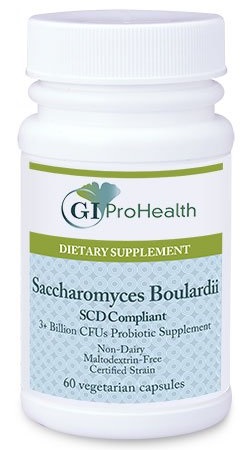 Numerous studies have been carried out using Saccharomyces boulardii and various species of Candida including Candida albicans and Candida glabrata.(3,4,5,6,7,8)

All of these published scientific studies came to the same conclusion, S. boulardii does not kill Candida yeast.

It does however secrete capric acid like what is found in coconut oil. This helps to prevent candida yeast from forming hyphae and building biofilms. It also helps reduce the spread of the candida colony by preventing it from adhering to epithelial cells. It helps reduce cytokine-mediated inflammatory host response and therefore reduces inflammation.

Lyophilized preparations, which have to be refrigerated, performed much better in these clinical studies than freeze dried forms. Doses need to be at least 500mgs or more to have any success.

S. boulardii is considered as a subtype of S. cerevisiae and has implications in the baking and brewery industries. More importantly, it has been used as an indispensable yeast probiotic for handling several gastrointestinal health issues like diarrhea, irritable bowel syndrome, Crohn’s disease, etc (1).

Better acid and heat tolerance as compared to makes it better suited for the gut environment. Found over 100 years ago from the peels of some fruits, it is now available as an over the counter probiotic. In a study conducted in 2016 some hamsters were infected with Clostridium difficile strains which led to cecal inflammation, mucous membrane damage, and increased expression of TNF Alpha and NF Kappa B phosphorylation - activating the host inflammatory pathways. When S boulardii was administered to these hamsters it showed great improvement in the damage caused(2).

Moreover infections of the gastrointestinal tract caused by Clostridium dificile and Helicobacter pylori when treated with antibiotics may lead to real complications. In a meta data analysis, S. boulardii based probiotics have been shown to effectively prevent diarhea which is associated with the antibiotic usage (3).

In a study done on oncohemalogical patients suffering from acute myeloid leukemia, myelodysplastic syndrome, or multiple myeloma, preparations of S. boulardii based probiotics did not cause any sepsis (4).

It has also been discussed that the frequency of the gene transfer of the antibiotic resistant genes is quite less between yeast and bacteria as compared to between two bacterial strains. So, it is not only stress resistant but also resistant to antibiotic actions. Also, S. boulardii is referred as generally regarded as safe (GRAS) with probiotic activity against a number of gut pathogens (5).

Is Saccharomyces Boulardii Safe to Take?

In 2003, an article was printed in the Journal of Clinical Microbiology describing outbreaks of Saccharomyces cerevisiae subtype boulardii in four hospitalized patients that were in the vicinity of patients that were treated with this yeast. All four were infected from the iv's that had been placed in their bodies. The suspected cause was that the yeast became airborne or the workers hands transferred the yeast to the patient in spite of repeated washing of their hands. All four patients recovered after being given 400mgs of fluconazole for various time frames.

The article points out that "Fungemias are not limited to immunocompromised patients and for this reason, S. cerevisiae subtype boulardii should be considered a potentially dangerous microorganism." (9)

In 2015, an article was published in Frontiers of Microbiology that talks about the potential risks of opportunistic strains of Saccharomyces cerevisiae in food products. They admit that S. cerevisiae has an impeccably good food safety record but the large amounts of this yeast that people are consuming these days is cause for concern.

They said that S. boulardii is nothing other than the commercialized name for S. cerevisiae and that S. cerevisiae has been related to a wide variety of infections, which range from vaginitis infections in healthy patients and cutaneous infections, to systemic bloodstream infections and infections of essential organs in immunocompromised and critically ill patients.(10)

I have a stack of stool test results from people with very high levels of Saccharomyces cerevisiae with no other yeasts present. These people are infected and are not immunocompromised laying in a bed in an Intensive Care Unit. Just the fact that the article in Frontiers of Microbiology mentions, "vaginitis infections in healthy patients", would keep me from taking it. Especially when you consider that it does not kill candida!

Yes, it keeps it from spreading but so does Gymnema sylvestre, which also has the ability to cause hypheal forms of yeast to shift back to a spore form which is easier to kill. And, because the effective agent it secretes, capric acid, is also in coconut oil, why not remove the risk and just take coconut oil, which is a food and has been medically proven to kill yeast.

The above article about Saccharomyces boulardii and the facts given in the article have been provided with evidences are correct. Probiotics actually are the live microorganisms, including bacteria and yeast, that have beneficial role to health.(1)

As mentioned in the article above, S. boulardii have shown many beneficial effects to human health and much more recent studies have been done regarding the use of S. boulardii. To give an example: a recent randomized controlled clinical trial was showed that S. saccharomyces was able to reduce the imbalance and alteration caused by the antibiotic treatment for the Helicobacter pylori, a known causative agent of chronic gastritis and gastroduodenal ulcer.(2)

It plays a crucial role in the preservation and/or restoration of intestinal barrier function in multiple disorders. S. boulardii has also been shown to have beneficial effects in the treatment of blastocystosis.(3)

A recent review paper has highlighted the use of S. boulardii in the possible treatment of colorectal cancer (4)

However, due to some cases of systemic infection in immunocompromised as well as otherwise healthy people, and as mentioned in the above article, S. boulardii should be used with caution and more clinical trials are needed.

Saccharomyces Boulardii is available here if you really want to take it.

You can find out more about S. boulardii here.

Back to Best Probiotics For Yeast Infections

Any questions about S. boulardii or any other questions or concerns, please feel free to contact us through the contact page of this website or see your doctor.