Dr. Atmika Paudel, PhD says... The facts in the article below about Gymnema sylvestre effects on yeast infections and its possible safety issues are correct and evidenced with experimental medical reports.

Gymnema sylvestre is an herb that is native to India and has been traditionally used to treat diabetes, metabolic syndrome, weight loss, and coughs. It has also been used to treat malaria and as a snake bite antidote, digestive stimulant, laxative, appetite suppressant, and diuretic. It is believed to have the unique ability to reduce a person's craving for sweets, which is extremely useful for a person just starting out on the candida yeast diet.

In addition to the studies on the Microfase page, which proves Gymnema sylvestre has the ability to prevent the production of spores by candida hyphae, and promotes the conversion of candida hyphae back into yeast spores which are much easier to kill, it has a broad spectrum of activity against other pathogens.

In a 2017 study that was performed by Microbiologists Arora and Sood from the Department of Microbiology at Guru Nanak Dev University in India, using the leaves against 13 Gram negative and Gram positive pathogenic bacteria, it was established that its broad spectrum activity had an average inhibition zone ranging from 14 to 23 mm. Candida albicans was the most sensitive organism, with an inhibition zone ranging from 13 to 35 mm. The flavonoids in the herb were the most effective with a kill time of 0-8 hours. The study concluded that Gymnema sylvestre was of clinical importance for Pseudomonas aeruginosa, Candida albicans, Escherichia coli, Staphylococcus aureus, and more. It was also neither mutagenic nor cytotoxic to the body.(Source) 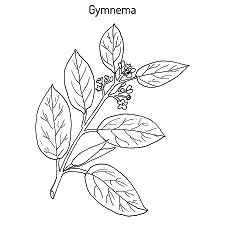 It also has an immune modulating effect and stimulates the lymphoid components of immune system.(Source) This is helpful to remove any toxins released by the death of candida yeast cells in the body.

Another study performed on mice with carcinogenic tumors, it was noted that it had marked antitumour-promoting activity and anti-inflammatory effects.(Source)

A study published in Biomed Res Int. in 2014, found that the "herb exhibits a broad range of therapeutic effects as an effective natural remedy for diabetes, besides being used for arthritis, diuretic, anemia, osteoporosis, hypercholesterolemia, cardiopathy, asthma, constipation, microbial infections, indigestion, and anti-inflammatory. G. sylvestre has good prospects in the treatment of diabetes as it shows positive effects on blood sugar homeostasis, controls sugar cravings, and promotes regeneration of pancreas. The herbal extract is used in dietary supplements since it reduces body weight, blood cholesterol, and triglyceride levels and holds great prospects in dietary as well as pharmacological applications".(Source)

Enzymatic activities of the antioxidant enzymes superoxide dismutase and catalase were brought back to their normal levels. A significant reduction in DNA, RNA and TP inflammatory levels were eliminated by the treatment. It inhibited the elevation of pro-inflammatory cytokines, PGE2 and NO levels in the colon. The apparent UC protection was further confirmed by the histopathological screening. It was determined that G. sylvestre extract showed significant amelioration of experimentally induced colitis.(Source)

Gymnema sylvestre, or “Gurmar” (sugar destroyer) vernacularly, also known as Australian cowplant, and Periploca of the woods, is an herb with vast pharmacological importance. In Ayurveda, it is believed that the phytoconstituents (triterpene saponins known as gymnemic acids, gymnemasaponins, and a polypeptide, gurmarin) of this herb suppress the sugar/glucose levels in the body. The herbal extract of G. sylvestre has been used for the body weight lowering of body weight, reducing blood cholesterol the triglyceride levels, amongst various pharmacological uses (1).

In another study, in vitro studies on human adenoma colon cancer cell lines were done using silver nanoparticles that were biofunctionalized with aqueous extracts of G. sylvestre and it was shown that the anti-cancer properties of the G. sylvestre constituents can be enhanced upon biofunctionalization (2). These bio-synthesized silver nanoparticles also exhibited effective antifungal activity against Candida albicans, Candida nonalbicans and Candida tropicalis (3).

What’s more, the anti-stress, anti-allergic, and antiulcer activity of the bioactive ingredients of G. sylvestre have been analyzed and demonstrated in another report. Experiments, including histopathology showed gastric protection against the aspirin-induced gastric ulcer mice model (4).

G. sylvestre, or madhusnashini, is available as tea bags, tablets, supplements for use in a number of medical complications including diabetes, asthma, obesity, arthritis, osteoporosis, constipation, and as an anti-inflammatory agent (5). It is of great use in developing countries due to its wide abundance and ayurvedic recognition.

The only known side effect is a reduction in blood sugar levels which could be a concern for people on diabetes medications. If you are diabetic, please consult with your doctor before taking gymnema for your yeast infection.

There are many more studies out there on gymnema, but the above is what I feel are the most important. With the effect of reducing a persons craving for sweets so you don't keep feeding the yeast, while preventing the production of spores by candida while forcing the hyphael pathogenic form back into a much easier to kill spore form, everyone with a chronic candida yeast problem should take it.

By now, it is quite evident that G. sylvestre, taken in any form, can reduce our sugar cravings and facilitate faster combating of fungal/yeast infections since sugar is the main food for yeast. In essence, the gymnemic acids have been shown to inhibit the formation of invasive hyphae from C. albicans-infected Caenorhabditis elegans worms, saving them from C. albicans induced death (1). Apart from the numerous direct health benefits this article has already discussed, it indirectly inhibits the yeast or hyphal growth of Candida and its other species, helping to detox the body from this pathogen.

The facts in the above article are correct and convincing as they have been evidenced with experimental reports. According to a paper published in PLOS One in 2013, gymnemic acids, present in the leaves of Gymnema sylvestre, inhibit yeast to hyphae transition of Candida albicans, although gymnemic acids did not have effect on the growth and viability of Candida. (1) Gymnemic acids rendered C. albicans less virulent in a nematode infection model, and also inhibited the hyphal growth of another fungi Aspergillus in the same study.

The role of dietary carbohydrates have been shown to increase the risks of Candida infections (9) (10) and Gymnema sylvestre have shown to reduce sugar cravings. (11)

Thus, G. sylvestre is indirectly involved in decreasing the risk factor of Candida infection in addition to the direct involvement by inhibiting Candida growth and transition from yeast form to hyphal form, and rendering Candida less virulent.


Gymnema Sylvestre is found in Microfase

Its also available by itself on Amazon

If you have any questions about G. Sylvestre or any other questions including asking us for assistance with your problems, please feel free to contact us through the contact page of this website or talk to your doctor.