Considered to be a very weak pathogen in the past, Aspergillus fumigatus has emerged as one of the important virulent fungal species, after Candida albicans. It is a global ubiquitous pathogen (present in multiple ecological niches like soil, plant remains, air, or dust) and is regularly inhaled by us into our respiratory system. Then why is it harmful and how do we tackle it? This article tells you more about the A. fumigatus fungal species and the intricacies of its infection, resistance, and therapeutics.

What is Aspergillus fumigatus? 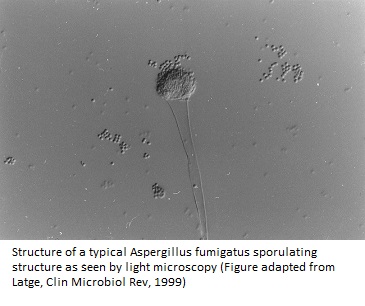 From more than 200 species of Aspergillus identified so far, about 20 or so cause infection in humans. Among these, Aspergillus fumigatus is the most common airborne saprophytic fungal pathogen that has been observed in a number of developed countries (1).

Did you know that we inhale hundreds of conidia (asexual infectious spores of Aspergillus) everyday? Thanks to our competent immune systems, they are eliminated and eaten up (phagocytosed) by the dendritic phagocytic cells in the alveoli of lungs (3). This inhibition of conidial germination is performed through the induction of inflammatory and fungicidal host responses by the β-glucan receptor, dectin-1. Therefore, in normal circumstances, no infection is manifested due to the quick defense action of alveolar macrophages. In case of people having significantly weakened immune systems (e.g. patients with hematological tumors, transplant recipients, chronic neutropenia-decline in neutrophils in the blood circulation, and people who are undergoing steroid therapy), invasive aspergillosis can prove to be life threatening (4).

The specialized asexual conidiophore structures of Aspergillus fumigatus release hundreds of conidia that are so minute that they stay airborne for long periods and can easily enter the lung alveoli by inhalation, supporting efficient and fast sporulation (1). The surface-exposed sialic acid residues also help in dispersing conidia into the environment (5).

In 2005, reports started coming in regarding the possible sexual nature of this mold, showing that the mating-type, pheromone-precursor, and pheromone-receptor genes are expressed during mycelial growth (6). A. fumigatus helps in the recycling of environmental carbon and nitrogen (7).

In terms of morphology, Aspergillus fumigatus is quite diverse. Minor differences in morphology have led to rise of varieties like acolumnaris, phialiseptus, ellipticus, and sclerotiorum (8). Not only that, it has been reported by Latge et al (1997) in the 13th Congress of the International Society for Human and Animal Mycology that the different strains of A. fumigatus are capable to infect and cause aggressive forms of invasive aspergillosis if the host defense responses are weakened.

Aspergillus fumigatus is also known to be a thermophilic species-meaning it can grow rapidly in high temperatures (upto 55°C) and can survive even at 70°C. Presence of a thick cell wall with 90% polysaccharides and rest proteins helps this mold to evade host immune response in many cases too.

The growing fungal hyphae also contain mycotoxins- mostly secondary metabolites which affect DNA or protein functioning of the pathogen. Some of the toxin substances released from conidia are gliotoxins, mitogillin, hemolysin, festuclavine and fumigaclavine A-C, fumitremorgin A-C, verruculogen, fumagillin, helvolic acid, and aflatoxin B1 and G1 (9). On the other hand, enzymes such as metalloproteases, aspartic proteases, serine proteases, dipeptidylpeptidases and phospholipases, as well as iron retrieving siderophores molecules are also involved in adding to the mold’s virulence (10).

In short, this opportunistic mold has the unique potential to sense favorable environmental conditions, endure harsh nutrient or environmental stress, and adapt to the available circumstances by simply choosing the elements which are best for its growth. Therefore, factors such as pigments, toxins, nutrient sensing, adaptation to hypoxic and low iron environment, release of millions of conidiophores, and surface proteins-together contribute to its virulence and pathogenicity. 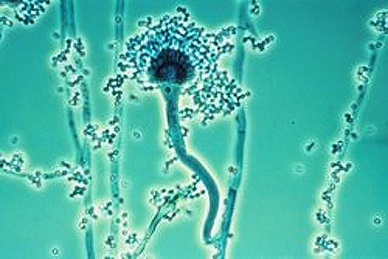 Biofilms are extracellular matrix materials which make a pathogen resilient and resistant to drugs and give an extra protective shield to the pathogens. Biofilms formed by Aspergillus fumigatus are quite harmful and challenging-especially is patients with asthmatic and cystic fibrosis conditions.

A study conducted in 2008 by Seidler et al from Dept. of Pediatrics, University of Heidelberg, Germany, compares the antimicrobial resistance conferred by A. fumigatus biofilms to seven different anti fungal drugs in both free-living (planktonic) and sessile (immobile or static) conditions on polystyrene, human broncho epithelial cell, and cystic fibrosis broncho epithelial cell models. Using techniques like confocal scanning laser microscopy, scanning electron microscopy, it was demonstrated that A. fumigatus biofilms resulted in loss of sensitivity towards popular anti fungals, in addition to affecting inflammation, and lung tissue damage (11).

Another study also showed that Aspergillus fumigatus forms biofilms under most of the static conditions (and to a lesser extent during shaking in vitro) - in agar media, on polystyrene surfaces, and on bronchial epithelial cells (12).

In the biofilm samples studied in two Aspergilloma patients as well as mouse models, Muller et al found that the extracellular matrix composition includes galactomannan, α-1,3-glucans, monosaccharides and polyols. It was also composed of melanin and major antigens and hydrophobin proteins. Among all the components, α-1,3-glucans plays a major role in the aggregation of Aspergillus hyphae.

Moreover, melanin (special skin pigment produced by melanocytes via polymerization of the amino acid tyrosine), which was secreted during an Aspergillus infection, was a prerequisite for pulmonary invasion and colonization (12, 13). Melanin is an important component of the conidial cell walls and governs the host-fungal interplay. It is encoded by the genes ALB1, AYG1, ARP1, ARP2, ABR1, and ABR2. Flow cytometry and scanning electron microscopy using three different A. fumigatus isolates showed that mutations in these genes led to faulty correct assembly of the cell wall layers and the insufficient expression at the conidial surface of adhesins and additional virulence determinants.

Interestingly, genome analyses of Aspergillus fumigatus have revealed that it contains more than 100 efflux pump encoding genes which efficiently evade the action of both-anti fungal compounds, as well as natural aggressive molecules from the surroundings. Moreover, there are no exclusive common genes between A. fumigatus and any other human-infecting pathogenic species like Candida or Cryptococcus (14). It is not as simple for this fungus to adapt and stay or colonize in the human host as Candida albicans.

Disease Conditions Caused by A. fumigatus

Such is the complexity of the pathogenic mechanisms of this mold that no single virulence factor has been pin pointed to cause fatal invasive aspergillosis. Researchers across the globe are together involved in diving deep into the mechanistic details of pathogenicity of A. fumigatus.

In older times, A. fumigatus was considered to be a weak pathogen causing minor allergies like Farmer’s lung (repeated exposure to conidia inhalation) or aspergilloma (1). With time and rise in the population of immunocompromised patients, several other disease conditions came to light:

The available drugs used for treatment of Aspergillus infections target ergosterol (fungal analogue of cholesterol) and β-1, 3 glucan, the major component of the Aspergillus fungal cell wall. Amphotericin B alone and in the liposomal forms helps the host macrophages to phagocytose and digest fungal cells, getting rid of infections; and is quite successful as resistance against amphotericin B is quite rare (18).

Caspofungin, micafungin, and anidulafungin echinocandins are also used to treat invasive Aspergillosis by acting as non-competitive inhibitors of enzyme the β-1, 3 glucan synthase. Itraconazole and newer triazoles voriconazole, posaconazole, and isavuconazole have been used as adjunctive fungal allergen reducing therapy for A. fumigatus infections. Resistance to azole drugs is quite common while that is not the case of amphotericin B and echinocandins. Azole resistance in has been attributed to their use in patients for the prophylactic and long-term treatments.

It is also suggested that surgery is the best choice of recovery and treatment for Aspergilloma patients. Alternatively, those who cannot undergo surgery choose intracavitary or CT-guided percutaneous instillation of amphotericin B deoxycholate.

Recently, many novel drug targets are being discovered, which in turn would assist in finding new antifungal compounds. Some examples are lysine deacetylases and acetyltransferases, farnesyltransferases, inositol acetyltransferase inhibitors, inhibitor of the oxidoreductase dihydroorotate dehydrogenase and glyoxylate cycle (18).

If you have any questions about Aspergillus fumigatus or any of the other
Aspergillus species, please contact us from the contact page of this website or talk to your doctor.