Geotrichum - Everything You Need to Know

The Geotrichum fungi was discovered in 1809. Microscopically, Geotrichum species produce hyaline, septate hyphae which show division into two parts or branches (dichotomous branching). They can be found in various places like soil, water, sewage, air, plants, dairy products and cereals (1). It has around 100 species included in it but the most relevant species are: Geotrichum candidum, Geotrichum clavatum, and Geotrichum capitatum (2). 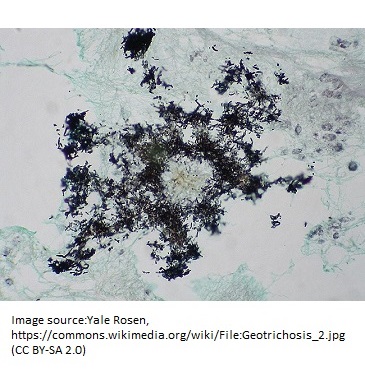 Geotrichum strains grow rapidly at 25°C and produce white, dry, powdery to cottony colonies. They either don’t grow or grow very slowly at 37°C. The infection caused by Geotrichum spp. are referred to as geotrichosis and mainly attacks people with weak immune systems, known as immunocompromised hosts (3). The infection is caused mainly by inhalation or ingestion. Bronchial, pulmonary, disseminated infection and fungemia are some of the reported problems caused by Geotrichum (4).

Apart from causing infection in humans, recent reports points towards it role in environmental damage. It has been claimed recently that aluminum and data storing polycarbonate resins found in compact discs have been damaged by their growth on them. It caused disc coloration and increase in its transparency (5).

Geotrichum Candidum occurs mainly on human skin, sputum, and feces. Initially it was isolated from soil samples found across the globe. Usually they grow in temperature range of 25°C to 38°C (In plants it ranges from 25°C to 27°C and in animals 30°C to 31°C). Furthermore, a pH range of 5-5.0 is well tolerated by them (6). It has various important biochemical activities like protein degradation, enzyme production, catabolism of free fatty acids, and deacidification (7).

Production of enzyme varies from strain to strain and can be attributed to strain origin. Due to these properties, it is used in cheese production, where the release of protein enzymes like lipases and proteases give cheese its distinctive flavor. It is involved in the development of various cheese varieties like soft cheese from cow’s milk, goat’s milk, and ewe’s milk. Depending on the type of cheese being made, G. candidum can be used either at the start or throughout the entire process of ripening. However, overgrowth of G. candidum should be checked because it can lead to slippery rind effect and off flavor in cheese (8).

Apart from cheese making, it catabolizes lactic acid in Nordic yogurt and gives it the desired velvety texture. Till date, no foodborne disease has been linked to the consumption of products containing G. candidum. However, clinical significance in humans should not be neglected, as it can cause local or disseminated disease referred to as geotrichosis (9). The primary risk factor for geotrichosis is being immunocompromised, namely neutropenia, followed by hematological malignancy, HIV, diabetes mellitus, altered gut mucosal immunity, indwelling catheters, parenteral nutrition, prolonged use of broad-spectrum antibiotics, alcohol abuse, chronic lung or kidney disease. Other critical illnesses have also been implicated as risk factors.

The current recommended treatments for geotrichosis include amphotericin B with or without flucytosine or voriconazole alone (4). Moreover, therapy and outcome of Geotrichum infections are dependent on the degree of invasion of the organism and the status of the host. Thus, Geotrichum spp. are rare emerging fungi which, despite adequate antifungal therapy, are associated with a mortality rate approaching 50%. Clinicians should be more aware of geotrichosis as a clinical entity in immunocompromised and other patients.

Geotrichum Clavatum also known as Saprochaete clavata, belongs to the genus Geotrichum. It has very rarely been associated with any kind of invasive human infection. Usually Aspergillus and Candida are fungi that cause major fungal infection leading to mortality amongst immunocompromised patients (10).

However, an outbreak of invasive infection by G. clavatum has recently been reported in hematological patients. The first case of G. clavatum infection was observed in Italy where three patients were reported in 2014. Two patients had acute myeloid leukemia and one patient had mantle cell lymphoma. Infection was diagnosed by positive blood cultures, which were further grown on chocolate agar and Sabouraud dextrose agar. The confirmatory test was done using MALDI-TOF mass spectrometry technique that could identify all the three isolates of G. clavatum. The average time taken by G. clavatum to grow on blood culture was 4 to 24 hours.

Infections by G. capitatum and G. clavatum show similar risk factors and clinical pictures. The former can be differentiated from G. candidum by the formation of annelloconidia, the ability to grow at 45 °C and resistance to cycloheximide (11).

While galactomannan and (1-3)-β-d-glucan positivity has been reported in the setting of G. capitatum infection, there is no literature to support the use of these tests to detect G. candidum. Advanced proteomic and genomic techniques like mass spectrometry and sequence analysis, can be used to characterize different strains within the same species (12).

Thus, G. clavatum seems to be an emerging, opportunistic agent in immunocompromised patients with malignant hematological disease. Further research is needed to determine the best antifungal strategy, the optimal duration of treatment, and to identify the reservoir of this species, the incubation period, and mode of transmission.

In recent years, the incidence rate of invasive fungal infection increased significantly, which has become one of the main causes of death for patients with hematologic malignancies. However, the rate of infection caused by Geotrichum capitatum is low, but with appearance of unusual clinical signs and symptoms in patients, makes its diagnosis difficult. It has low virulence, and it is considered as an opportunistic pathogen and can occur in patients with non-neutropenia and local infection (13).

It has been observed, climatic factors seem to play a selective role in the epidemiology of infections caused by Geotrichum capitatum, like 87 % are observed in Europe, 10 % in USA and 5 % in Asia (15).

Till date, no effective treatment has been established for G. capitatum infection. Using amphotericin B liposome or amphotericin B combined with voriconazole or other new antifungal agents may achieve a certain effect (16).

Since in many cases, G. capitatum infection is associated with poor prognosis, early diagnoses and early treatment with effective anti-fungal therapy might help the patient come out of agranulocytosis earlier and reduce death. Therefore, early anti-fungal treatment is a key factor in reducing mortality.

Very limited antifungal agents have been tested in vitro for treatment of infections caused by Geotrichum. However, amongst the azoles, voriconazole, ketoconazole, and itraconazole have been tested. It was observed that out of three azoles, voriconazole yields the lowest minimum inhibitory concentration (MIC) followed by ketoconazole and itraconazole (17). In simple terms, a drug that works at the lowest MIC is the better one, since minimal doses are required.

Different species of Geotrichum are potentially pathogenic in immunocompromised hosts. The incidences caused by them might be underreported, since they can be misdiagnosed histo-pathologically as Candida spp., Aspergillus spp., or Trichosporon spp. in a few cases. Thus, this possibility for misdiagnosis illustrates the importance of obtaining fungal cultures in addition to histopathological data. Some of the key points which need to be considered are better awareness of their pathogenicity could delineate its true incidence, patterns of clinical disease, and responsiveness to therapy.

As always, it is best to work with your doctor for a correct diagnosis and when treating yourself for Geotrichum.