Amongst other up-and-coming fungal yeast pathogens, Candida rugosa is a lesser known invasive candidiasis-causing yeast mostly prevalent in tropical regions of Latin America. All the clinical mycologists are jointly making efforts to tackle a number of emerging fungal infections. Some of these major infections affecting the global population are Aspergillosis and Candidiasis. The former is caused by Aspergillus fumigatus while the latter is caused by a number of fungal pathogens belonging to the Candida species. Until a few years ago, C. albicans was believed to be mainly involved in almost every case of fungal yeast infection. With time, and an accompanying progress in identification techniques, several other Candida species such as Candida glabrata, Candida parapsilosis, Candida krusei, Candida lusitaniae, and Candida guilliermondii came into notice (1).

C. rugosa, along with some other non C. albicans Candida species such as C. tropicalis, C. parapsilosis, C. guilliermondii, C. lusitaniae, C. famata (D. hansenii), and C. dubliniensis form a part of the Candida CTG clade and translates CTG codons in its genomic DNA as serine instead of leucine residues (2). The other Candida species such as C. glabrata and C. kefyr are more similar to Saccharomyces cerevisiae (belonging to the whole genome duplication clade). 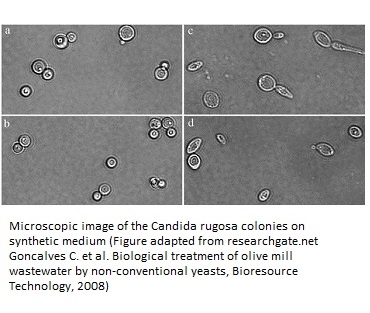 Did you know that C. rugosa has primarily been recognized as a cause of clinical mastitis in cattle herds? A case study has reported sporadic yeast mastitis due to this organism after collecting the milk from infected cows that were given intra-mammary antibiotic treatment (3). Thus, this pathogen has a reputation of being more common as a veterinary fungal microbe.

Candida rugosa and Candida mesorugosa are the members of the C. rugosa complex. The C. rugosa colonies are white, wrinkled, and flat on Sabouraud Dextrose Agar (SDA). On the other hand, C. mesorugosa forms white and smooth colonies. On chromogenic medium, the isolates formed small, dry greenish-blue colonies with a pale or white border, similar to C. albicans. This description was given by a group of researchers from Ghana in 2016. Evidence also says that C. rugosa forms pseudohyphae in human serum (4).

Are You at Risk From Candida rugosa?

It was thought previously that C. rugosa was frequent only in cattle fungal infections. Slowly, cases in the human subjects started becoming more frequent. The cases of C. rugosa infecting human populations are generally associated with catheters and total parenteral nutrition. For the first time in humans, candidal fungemia due to this unusual fungal pathogen was reported in 1985 in a patient with intravenous catheter (5). Later, a case study reported by Minces et al in 2009 discussed the presence of this yeast in the blood culture of a patient showing fever and gastric complications. This patient had a history of Crohn’s disease and a recent bacteremia (bacterial blood infection). The patient was being treated via use of central venous catheter and a combination of antibiotics, which probably led to development of this fungal infection (6).

The journal Peritoneal Dialysis International published the first ever case report defining peritonitis (acute inflammation of the inner layer of abdomen that may be caused by fungi or bacteria) in a 31-year old female caused due to C. rugosa infection. This woman was on continuous peritoneal dialysis due to acute kidney related complications. When the peritoneal fluid culture was microbiologically tested, C. rugosa was identified to be the causative agent. Only when the peritoneal dialysis catheters were removed, and antifungal therapy comprising of amphotericin B, fluconazole, ketoconazole, and itraconazole was given, the patient’s condition improved (7). Thus, fungal peritonitis due to C. rugosa, though very rare, is a very serious infection and should be considered in case no antibiotic treatment is working for a peritonitis condition.

The C. rugosa and C. pelliculosa mixed polyfungal infections have also been reported, though infrequently, in neonates undergoing hemodialysis. A case study from Slovakia was reported by Hanzen in 2002 where a 27 day old baby girl with suspected UTI and renal failure was dialyzed twice a week. The blood cultures showed the presence of two different C. rugosa strains and a C. pelliculosa strain (8).

The C. rugosa candidemia resembles the infections caused by other non-C. albicans Candida species like C. glabrata, C. krusei, C. parapsilosis, C. tropicalis, and C. guilliermondii. The high risk population includes the patients with history of hospitalization who may have many other underlying disorders, leading to a weakened immunity. An immunocompromised individual with catheterization, long-term exposure to antibiotics, burn wounds, and surgeries is at high risk of contracting such Candida infections. Prolonged nystatin prophylaxis has also been shown to be a risk factor for developing C. rugosa infections.

You would be surprised to know the wide range of industrial applications this pathogen has to offer! In particular, the lipases secreted by C. rugosa (CRL) have a number of significant industrial uses and this mixture of lipase isozymes is known to benefit the lipase industry (9). These include its functions in food industry, commercialized production of ice cream, formation of single cell proteins, and biocatalytic resolution of life‐saving pharmacological agents.

Single cell proteins (SCPs) that are generated by growth of cells in situ on effluent wastes are used as protein-supplements. These can be derived from bacteria, fungi, and fungal microbes to produce useful food alternatives in the food industry. SCPs from a thermotolerant strain of C. rugosa were isolated in Sudan from waste products ethanol synthesis and had more than 41% crude protein and around 36% actual protein and comprised of all essential amino acids (10). This is a classic example of converting waste forms into valuable products which would benefit the society in terms of being a staple food source (9, 11).

C. rugosa also enables to produce carbohydrate esters and amino acid derivatives which are otherwise difficult to procure by conservative chemical synthesis methods. It also has uses in modulation of biosensors, bioremediation, detergent synthesis, and in cosmetics and making scents and fragrances (9). The use of C. rugosa lipases in the hydrolysis and production of commercial esters is quite an important field where the biocatalytic action of this pathogen is employed.

The lip-tech (Lipase Technology) industry is also trying to hydrolyze excess of lipids from cells by using these lipases by introducing them into intact cells of organisms. This technology will be very promising when successful results are obtained in human trials!

Finally, bioremediation is an excellent waste management application of the CRLs for assimilation of lipids from waste oils. This kind of biotechnological advancement has happened because CRLs, along with other enzymes like proteases, amylases, and cellulases, can help in eradicating oil spills or other oil wastes to convert them into something valuable, e.g., to produce liquid soaps in the presence of emulsifiers. All these techniques of manipulating and exploiting the CRLs are being done by extensive research combining protein computerized modeling, DNA analysis, and mutagenesis (12).

The general treatment guidelines for C. rugosa infections include antifungal therapy using an echinocandin or amphotericin. Since the infection rate is high in patients who have undergone catheterization, catheter discontinuation is another alternative to tackle the growing C. rugosa infections (6).

An article published in Cancer by Sugar and Stevens reported two immunocompromised patients with C. rugosa infections. One patient was diagnosed with leukemia and the other had pulmonary infection wherein C. rugosa was isolated from the sputum sample (13). These were treated with combinatorial therapies of amphotericin B, flucytosine, miconazole and had showed resistance to ketoconazole.

The level of susceptibility of this pathogen to the existing antimycotic agents is fast declining. Increasing number of patients showing resistance, or reduced sensitivity to azole drugs and other class of antifungals are being reported. One such report from the All India Institute of Medical Sciences, India, recorded a cluster of cases of C. rugosa candidemia in Intensive Care Unit trauma patients (14). Nineteen critically ill ICU patients within one year (2008-2009) tested positive for C. rugosa, which was unusually high compared to the global incidence of this pathogen. Out of these, 13 succumbed to the infections, including the 6 individuals who received antifungal therapy.

ARTEMIS DISK Global Antifungal Surveillance study conducted by Pfaller et al, between 1997 to 2007 shows that C. rugosa is one of the common fluconazole resistant emerging Candida species. In particular, this trend of resistance and growing rate of isolation of C. rugosa from infected samples was found to be rising in the Latin American region (15).

Therefore, this pathogen cannot be taken lightly anymore! It is by now apparent that it poses a potential threat to the antifungal therapies and impedes the steps towards successful treatment, identification, and drug susceptibility profiling. In any case, for efficient treatment, drug sensitivity testing and species identification play key roles in deciding the correct antifungal treatment regimen.

Any questions about Candida rugosa or about yeast infections in general, please feel free to contact us or talk to your doctor.