The Rhodotorula species, including Rhodotorula mucilaginosa are a sturdy fungal species that can stay viable for decades, even when stored in river water. The infections caused by the species of genus Rhodotorula are neither very frequent nor very ancient. After being reported once in 1960, they were quite infrequently reported in the subsequent years. Later, they were again reported after a long gap in 1985 (1). 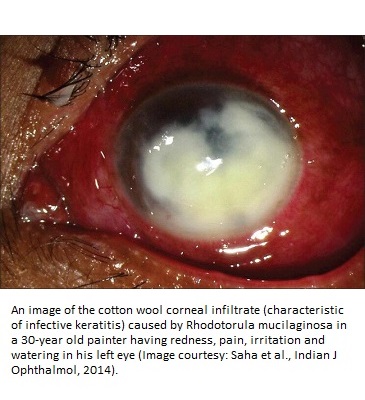 These ubiquitous basidiomycetous species of yeast have been isolated from multiple sources of the environment like terrestrial plants which are decomposing in soil, marine settings, lakes, coastal waters, deep-sea waters, and igneous rock aquifers. Since they are quite resilient and tough in nature, they have also been found in extreme cold and acidic environments such as the ice glaciers of Greenland and Antarctica (2). It has been shown to absorb iron (III) ions in aquatic environments and can exist easily in waters that are moderately contaminated by the iron (III) ions (3).

What’s more, the presence of Rhodotorula in stools samples indicates that they can even survive the acidic gastrointestinal environment (4). This epiphytic yeast has also been found as a part of the normal microflora in the human feces, skin, sputum, and digestive tract of human subjects (5).

In humans, three species of Rhodotorula are considered to be infectious and lead to mild or severe cases of fungemia. These are Rhodotorula glutinis, Rhodotorula minuta, and Rhodotorula mucilaginosa (also known as Rhodotorula rubra). Out of these three, R. mucilaginosa is the most frequent etiological agent of infection in immunocompromised individuals. This species of Rhodotorula is specifically characterized by its inability to assimilate nitrate and d-glucuronate. However, it can assimilate glucose, maltose, trehalose, and raffinose. Another feature of this species is that it flourishes at 40°C. In terms of ancestral relationships, it is most closely related to R. dairenensis and R. pacifica.

To avoid misinterpretation in identification of this species from other related microbes of the same genus, molecular typing methods like sequence identification and analysis of ITS (Internal Transcribed Spacer) or D1/D2 (D1-D2 domain of the large-subunit ribosomal RNA gene) regions are required (6). In addition, mass spectrometry is now widely recognized for clinically relevant species identification. These methods always work more efficiently when compared to the conventional microscopic or biochemical tests for yeast species identification; and are quite trustworthy too.

The R. rubra or R. mucilaginosa colonies are mostly coral pink, smooth or reticulate, rugose (wrinkled appearance), moist to mucoid. Besides, they exhibit spherical to elongate budding yeast-like cells or blastoconidia which lack pseudohyphae or hyphae (7).

Many studies have emphasized the role of microbes and their aggregation in the formation of house dust particles. Along with Cryptococcus diffluens, R. mucilaginosa is the most common microbe found in house dust. It is believed that the most common reason for the occurrence of indoor fungi is food spoilage, which then contributes to the fungal microbial assembly into house dust. Microbial communities also thrive and contribute to dust and mold due to water seepage, high moisture content, or floods. Besides the fungal R. mucilaginosa culprit, the microbial house dust due to water damage or dampness is also constituted by bacterial communities such as mycobacteria and streptomycetes (8).

A study conducted by Woodcock et al in 2006 on synthetic and feather pillows in UK concludes that if you continue using your pillows and beddings for years and years, the airborne R. mucilaginosa gets accumulated there too (9)! Other common species found in these beddings were Aspergillus fumigatus and Aureobasidium pullulans. It is not difficult to understand by now that these airborne household pathogens exert a regulatory effect on the human health, especially dealing with allergies, gut microbiota, and immune system cross - regulation.

Besides being pathogenic and hazardous to human immunity, this fungus is recognized as the one of the top ten causes of food spoilage (10). It has been reported that immunocompromised patients receiving hospital food such as cheese, meet, and fruits have shown contamination of Candida, Trichosporon, Saccharomyces, Rhodotorula, Aureobasidium yeast species (11). This and other opportunistic yeast pathogens have also been found in other foods and beverages such as peanuts, apple cider, cherries, fresh fruits, fruit juice (common pathogens are Candida lambica, Candida sake, and Rhodotorula mucilaginosa), sausages, edible molluscs, and crustaceans (12, 13).

However, these pigmented yeasts have some biotechnological applications too. Some of these are carotenoid production, liquid bioremediation, heavy metal biotransformation, and antifungal and plant growth-promoting functions. The red pigment or the carotenoids serve to protect the yeast from destructive UV irradiation. This was proven by showing greater UV-B protection of the yeast that produced greater number of carotenoids molecules (specifically torularhodin). This phenomenon is referred to as Photoprotection and is a key feature of R. mucilaginosa (14). Therefore, greater the pigmentation produced in the yeast, greater is its survival and resistance towards UV-B. Water treatment using Rhodotorula mucilaginosa is also a promising approach since this fungus is capable of absorbing iron (III) ions from contaminated waters (3).

The Rhodotorula species have also been shown to degrade plastics as seen by their colonization on plasticizers and presence of metabolites from their breakdown (15). It has therefore been implicated in contaminating plastic medical or surgical devices. Their presence has been recorded on plastic catheter devices, bathtubs, toothbrushes, etc. Being cold-adaptive, a marine Antarctic strain of R. mucilaginosa has promising future in showing enhanced extracellular protease production at low temperatures with lower levels of glucose and peptone in the culture media (16).

Xylitol and ethanol production from sugar sources like glucose and galactose have also been implicated to novel R. mucilaginosa yeast strain PTD3 (isolated from the stem of a poplar tree) by a group of scientists from the University of Washington. In fact, this strain produced even higher concentrations of xylitol than the known fungal producer Candida guilliermondii (17).

Fungemia is the most common form of infection caused by this species. Second to fungemia, eye infections are most frequently incited by this fungal species. In fact, 79% of the Rhodotorula infections result in fungemia and eye infections. The most common effect of Rhodotorula mucilaginosa eye infections is the loss of vision, keratitis, and endophthalmitis. In a study from Eastern India published in the Indian Journal of Ophthalmology, a case of a 30-year old male was presented, showing presence of fungal hyphae and yeast cells in the smear from his corneal scraping (19). This was a case of acute keratitis in his left eye, identified by redness, irritation, and pain.

Interestingly, in a study published in Mycopathologia in 2016, R. mucilaginosa-associated fungemia was identified in an immunocompetent patient having tuberculosis infection of lungs, who responded well to the antifungal amphotericin B (20).

What are the Risk Factors of Developing R. mucilaginosa Infections?

As already mentioned, this fungal pathogen poses the greatest threat to the people with an immunocompromised immune system. People who have undergone catheterization (central venous catheters or umbilical venous catheters) for long periods are primarily at the highest risk for developing Rhodotorula infections.

Various other factors include use of immunosuppression drugs, malignancies of blood, solid tumors, liver and kidney dysfunction, and prolonged use of broad spectrum antibiotics and corticosteroids, sickle cell anemia, and short bowel disease.

Recipients of organ transplants or bone marrow transplants, chemotherapy, or anti retroviral therapy (ART) for HIV-AIDS also face an elevated risk of R. mucilaginosa attack due to extended use of catheters and drugs. If you wish to understand the underlying diseases during coinfection with R. mucilaginosa, I suggest you to read the epidemiologic report by Wirth and Goldani published in 2014 (4).

In 2008, Tuon and Costa from the Department of Infections and Parasitic Diseases, University of São Paulo, Brazil published a review based on 128 cases of Rhodotorula infections. They concluded that out of different species of Rhodotorula, R. mucilaginosa was the most frequently observed and immunosuppression and cancer were the most common risk factors for contracting this infection (21).

In case of Rhodotorula fungemia, co-treatment of neutropenia is mandatory. Systemic antifungal treatment may not be necessary and catheter removal may simply be needed to get rid of the virulent Rhodotorula mucilaginosa. When getting rid of catheters in not on the option list, treatment with amphotericin B is recommended (22).

Systemic eye infections may be treated by oral itriconazole while topical treatments include amphotericin B and natamycin and atropine drops (19). Topical voriconazole may also be considered in unresponsive patients. Overall, we need to change our unprepared attitude towards the infections caused by this rare species of fungi for timely and effective therapeutic success.

Any questions about Rhodotorula mucilaginosa or yeast infections in general, please feel free to contact us from the contact page of this website or see your doctor.