Bladder Infection, How You Got It, How to Treat It

Bladder infections and UTI's are a very important factor to consider in treating chronic vaginal yeast infections since they are the second-most common reason women are prescribed antibiotics.

The typical symptoms can include a burning pain when urinating, increased urinary frequency, night-time urination, a turbid, foul smelling or dark urine, and lower abdominal pain.

Symptoms must be correlated with a urine sample for the correct diagnosis. A microscope will reveal high levels of white blood cells and bacteria present in the urine.

How do You Get a Bladder Infection?

When urine is secreted by the kidneys it is sterile until it reaches the urethra, vaginal secretions then introduce bacteria. The body has many defenses to prevent bacterial growth in the urinary tract. The urine flow washes away bacteria, the pH of the urine prevents the growth of many bacteria, white blood cells control bacteria, and the lining of the bladder has anti-microbial properties. 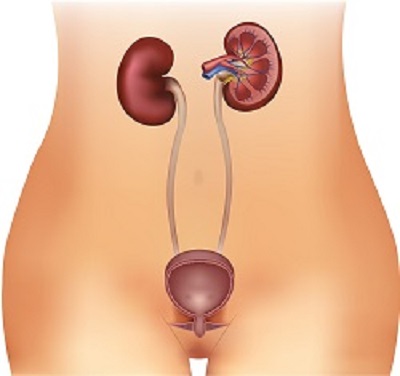 Women that suffer from bacterial vaginosis, which is caused by the Gardnerella vaginalis bacteria, have a greater risk of developing urinary tract and bladder infections. This trusted medical study was done at the Washington School of Medicine and published on Science Daily, confirmed that when Gardnerella vaginalis gets into the urinary tract, it triggers dormant E. coli to multiply leading to another uti.

UTIs are a common clinical problem (1) across the lifespan of women. Recurrence of these UTIs (rUTIs) is another important consideration. The most common UTIs affect the bladder and the urethra. The E. coli infection is the most common type of infectious organism for the urinary tract. Although up to 90 percent of UTIs are caused by E. coli, the remaining 10 percent are caused by bacteria known as Chlamydia, Mvcoplasma, Neisseria gonorrhoeae, and others.

UTIs are the most common indication for antimicrobial use in hospitals (2). Antibiotics are great for knocking out the urinary tract infection causing microbe, but they also knock out the good microbes which can lead to overgrowth of yeasts, molds and ‘bad’ bacteria. UTIs can be caused by poor hygiene, impaired immune function, the overuse of antibiotics, the use of spermicides, and sexual intercourse.

The majority of rUTIs are believed to be re-infection from extra-urinary sources such as the rectum or vagina (3). UTIs most often occur when bacteria that live inside the bowel make their way into the urinary tract. The vagina is a key anatomical site in the pathogenesis of UTIs in women, serving as a potential reservoir for infecting bacteria and a site at which interventions may decrease the risk of UTI. The initial step in the pathogenesis of UTI is the colonization of the vaginal opening and area around the urethra (4) with the infecting pathogens, followed by their upward movement via the urethra to the bladder and sometimes the kidneys to cause infection.

Another cause of rUTIs, recently described, is the vaginal bacterium Gardnerella vaginalis triggers E. coli (5) already hiding in the bladder to cause another UTI. Thus, understanding factors that affect the microbiota of the vagina is key to understanding the pathogenesis of UTIs and to designing interventions to prevent UTIs.

The natural approach to treat bladder infections and UTIs can help prevent a vaginal yeast infection that can be caused by the antibiotics that are prescribed for this infection. The protective shield of beneficial bacteria that line and protect the urethra are stripped away when taking antibiotics and are usually replaced by less effective organisms.

Carol A. Kauffman et al, published a study in May of 2011 that said bladder and urinary tract infections caused by yeast are rare but do happen. If detected, follow up tests should be performed to determine species and if it is also in the bladder and possibly kidneys. As the above study points out, if it is in the kidneys, it needs to be treated or it can be fatal.

If you suffer from recurrent bladder infections or UTIs caused by bacteria, you should follow the suggestions below.

Increase your urine flow by drinking more liquids, ideally distilled or pure water. Herbal teas are ok and fresh juices diluted half and half with distilled water are ok unless you suffer from yeast infection also. If this applies to you, watch the sugar content. Avoid soft drinks, concentrated fruit juices, sweetened coffee, and alcoholic beverages. Drinking 16 ounces a day of natural, unsweetened cranberry juice has been shown to produce beneficial effects in 73% of men and women. Drinking more than that was found in tests to have very little effect.

D-Mannose﻿ is a simple sugar and close cousin of glucose and can cure more than 90 percent of all UTIs caused by E. coli within 1 to 2 days. Even more remarkably, D-mannose accomplishes this feat without killing a single bacterium!
Because it gets rid of UTI-causing bacteria without committing "bacteria-cide against good bacteria," people who use it suffer none of the unwanted side effects of antibiotics: no GI problems, no yeast infections, no resistant bacteria, and no mass slaughter of your good bacteria which can take a year to correct. In fact, D-mannose has no adverse side effects of any kind.

Itzhak Ofek and Edwin H. Beachey with the American Society of Microbiology found D-mannose inhibited or reversed E. coli epithelial cell adherence and yeast cell aggregation. Which could inhibit yeast from giving you a urinary tract or bladder infection.

As a bonus, D-mannose actually tastes good. Where a "spoonful of sugar" helped the medicine go down in Mary Poppins’s day, with D-mannose, a spoonful of sugar is the medicine. But it is not a sugar that yeast feeds on, it is a glyconutrient, so don't worry if you do have a yeast infection also, it won't feed it.

Because it is so effective and so benign, women (even pregnant women) who are susceptible to recurrent UTI’s can safely take D-mannose as a preventive measure to head off future attacks. D-mannose is also ideally suited for children with bladder infection or UTIs. Because it tastes so good, it is a sugar, after all, children actually enjoy taking it.

Although D-mannose is virtually unknown to practitioners of conventional medicine, many research reports have demonstrated its mode of action and effectiveness against E. coli, the microorganism that causes most UTIs. Moreover, nearly 15 years of clinical experience have shown that it is just about as effective at curing UTIs as antibiotic drugs.

At first glance, D-mannose may sound too good to be true: a "medicine" that’s highly effective, perfectly safe, pleasant to use, inexpensive, and available without a doctor’s prescription. Yet, it is true! Unlike virtually any conventional medication, and many natural or "alternative" treatments as well, D-Mannose has no known drawbacks and usually works within a couple days or less.

Doses for D-Mannose should be at least 3000 mgs per day.

The holistic approach to treating UTIs includes the use of cranberry juice, increase of water consumption, reduced sugar intake, and probiotic supplementation. D-Mannose is by far the most effective supplement (6) for both treatment and prevention of UTIs.

Similar to glucose in structure, D-mannose is a naturally occurring sugar that is found in a number of fruits, including apples, blueberries, and cranberries (7). This sugar is the reason that cranberry juice has been commonly recommended as a UTI treatment, though it is far easier to get the recommended dosage from a supplement.

D-mannose is effective because it attaches to E. coli bacteria, causing them to stick to each other (8) and preventing them from sticking to the walls of the urinary tract. The bacteria can then easily be eliminated from the body during urination. Some studies suggest D-mannose may play a useful role as a "prebiotic." Prebiotics are substances that may help your body by stimulating the growth of "good" bacteria in your digestive system.

D-mannose, even in large quantities, does not cause any adverse side effects (9), and cannot be metabolized the way other sugars can, making this supplement safe for diabetics and others who are avoiding sugar for any reason. Patients who frequently feel like they are going to get a bladder infection after intercourse will do very well to try a teaspoon of D-mannose prior to intercourse.

Another good supplement for urinary tract infections is Uva Ursi here. It works on a much broader range of bad bacteria than D-Mannose. However, it could kill some of your good bacteria so I would make sure I took a probiotic while taking it. For additional information including studies, dosage directions and side effects of Uva Ursi, please see this webpage.

Taking a probiotic will also help build your good bacteria levels so you can prevent these infections in the future.

Several studies have shown that changes in the characteristics of the vaginal microbiota resulting in the loss of normally protective probiotic (good) bacteria (10) increase the risk of UTIs. Probiotic therapy to treat UTIs is an emerging concept, as it not only maintains low pH of the genital area, produces hydrogen peroxide and hinders the growth of E. coli but also activate the body’s innate immune responses (11) to target the pathogen.

Make sure you have your urine monitored by your physician after 7 to 10 days.

By avoiding the antibiotics associated with most bladder infection treatments you will be able to avoid a vaginal yeast infection, which can be the result of taking these drugs.

Back to Women's Yeast Infection

Any questions about UTIs, bladder infections or women's yeast infections, you can contact us from the contact page of this website or talk to your doctor.