Dr. Atmika Paudel, PhD says... Overall, the facts in this article about how the bacteriophages in Floraphage work and what they do is medically correct.

Floraphage has been designed to increase probiotic bacteria counts when taken with or without probiotic supplements. It produces natural sources of nutrients for these bacteria by specifically targeting harmful strains of E. coli. It penetrates the cell wall and kills it from the inside out and in the process, E. Coli releases its nutrients into the intestine, detaches from the intestinal wall to be disposed in the stool.

Good probiotic bacteria feed like crazy on these nutrients and move into the vacated space on the intestinal wall, forcing out bad bacteria and yeast. This process is extremely useful when battling yeast infections and bad bacteria or Small intestinal bacterial overgrowth (SIBO).

The phages in the name Floraphage refer to a type of protein that specifically target certain species of bacteria, in this case, pathogenic E. coli. If you have ever had a urinary tract infection, you have pathogenic strains of E. coli. The phages do not target other bacteria and are completely harmless in the human body. 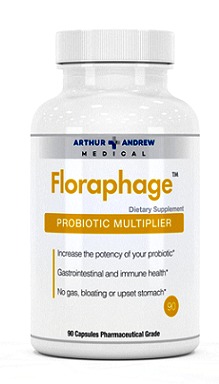 Pathogenic E. coli grows very quickly, much faster than Bifidobacteriums, L. acidophilus and other good strains. They attach to the intestinal wall and will not allow the good bacteria to attach. They will form large biofilms which allows them to avoid detection by the immune system and spread at will.

These biofilms can result in chronic itching of the skin. They are observed in increased numbers in inflammatory bowel disease, Crohn's disease, and ulcerative colitis.(Source) It can cause chronic diarrhea and other intestinal distress. I suspect that they are a major cause of SIBO.

Bacteriophages are simply bacterial predators that are found everywhere in nature and we consume them every day in our foods.They coexist within the host typically living in the mucous layer that protects the intestinal surface. They feed on pathogenic strains of bad bacteria helping to prevent infection within the host.

Extensive studies and clinical trials have proven they are safe when taken in supplement form. (Source), (Source) Some of these phages stimulate antibody production (Source), and help regulate inflammatory and autoimmune reactions in the gut.(Source)

They have been found by the Department of Biology at San Diego State University, to be natural inhabitants of our digestive systems.(Source) This study that was published in the US National Academy of Science in 2013, along with this picture show how that relationship works. It's a symbiotic relationship that protects our intestinal epithelial cells from bacterial infection.

Prior to the invention of antibiotics, phages were used for human treatment and added to poultry feed to prevent infection. In recent years, some chicken farms have stopped using antibiotics due to the rise of antibiotic resistant bacteria, and have been adding phages to their feed instead.

Today, with so many medical advances since 1940, these phages can be analyzed to see exactly what bacteria they kill. In the old days they did not have this ability so they would prescribe bacteriophage cocktails and hope for the best. In the future, you are going to see a lot more of this medical technology come to the forefront.

A simple test could reveal what type of bacteria you are infected with, and the appropriate bacteriophage prescribed that targets that bacteria, no more mass killing of bacteria like antibiotics. Gone will be the days of losing 30% of your good bacteria to a two week course of broad spectrum antibiotics, which can take a year to recover from. This two week course can also allow bad bacteria including E. coli, to get out of control before your good guys grow back.

The above section has described how phages, in general, and Floraphage, in specific, show the bacteria-eliminating capability for a better gut health. Though I am not endorsing the product, I agree with the bactericidal properties of these phage viruses.

In a vital study published in Cell Host and Microbe in 2019, scientists have shown the impact of bacteriophages on the microflora composition in mice gut. Briefly, gnotobiotic mice, that is, the mice genetically engineered to lack all kinds of bacteria within or outside their body, were used in this research. Ten different strains of bacteria were administered to these gnotobiotic mice and subsequently, different phages were introduced to study their effect on the bacterial colonization or clearance. Not only were the bacteriophages successful in killing the specific types of bacteria for which they were designed, but they also facilitated the modulation of the interbacterial communication; and affected more than one species of bacteria. With the passage of time, therapy is slowly reverting to the use of bacteriophages since antibiotics have been associated with a lot of adverse side effects (2). With the use of phage therapy, the dysbiosis in the gut microbiome, which leads to a number of gastrointestinal problems like inflammatory bowel disease, irritable bowel syndrome, diarrhea etc., can be tackled (3, 4).

However, an anti-phage defense technique may be employed by some clever bacteria by producing outer membrane vesicles, or modifying their inner membrane proteins, and this may help them to evade phage attack (3).

An experimental study was set up to simulate the physiological conditions of the small intestines. Four probiotics were selected along with individual strains of probiotic bacteria. E coli levels were also tested with and without Floraphage; and fructooligosaccharides (FOS - inulin) was also compared for its growth effects.

The Jarro formula contained Lactobacillus and Bifidobacterium and showed a 1636% increase in numbers over control.

Dr. Ohhira’s formula contained Lactobacillus and Bifidobacterium and showed a 2667% increase in numbers over control.

PB8 contained Lactobacillus and Bifidobacterium and showed a 331% increase in numbers over control.

Overall, Floraphage increased these bacteria numbers by an average of 2400% or 24 times.

The following bacteria showed significant growth when combined with Floraphage compared to growth without the phage.

B. Breve, B. animalis, B. longum, L. casei, and B. subtilis are all found in Profase and are all good yeast killers or immune system stimulators. Taking one 30 billion good bacteria in one capsule of Profase with one capsule of Floraphage, could turn 30 billion bacteria into a possible 720 billion bacteria. Yeast killing on steroids! Especially when combined with the biofilm busting abilities of Biofase!

Test were performed to monitor the effects on E. coli over a 10 hour period as well. After 60 minutes of taking Floraphage, E. coli levels began to crash, after 10 hours, 50% had died. Untreated samples of E. coli continued to grow adding 30% to their numbers in 10 hours.

B. Longum, B. breve and E. coli were tested using Floraphage verses Inulin, a very popular FOS based prebiotic. Floraphage achieved 500% more growth of B. longum verses Inulin and 132% more with B. breve.

L. lactis was studied in-vitro with and without E. coli present. Both separately grew at comparable rates but when combined, E. coli significantly inhibited the growth of L. lactis and overall outgrew it. This experiment proved that E. coli inhibits the growth of good bacteria. When Floraphage was added to the mix, it reversed the growth pattern, E. coli was severely reduced and L. lactis levels went through the roof.

You can read the entire study here if you choose.

Overall, bacteriophages allow the good bacteria to flourish, encouraging immune strength and intestinal balance (1). They lead to increased numbers of probiotic species like Lactobacillus, Bifidobacterium, Bacillus, etc. Phages can also be the driving force of generating diversity in the bacterial hosts, and contribute to biodiversity, as shown by a marine study on Flavobacterium sp (2).

Most of the time, it is reduced good bacteria numbers that allow yeast to get out of control. Most of these bacteria crowd out yeast by attaching to the intestinal wall which does not allow yeast any place to take up residence. Other species, like those found in Profase, actually kill yeast while also stimulating the immune system.

E. coli however, outgrows these good bacteria by attaching to the intestinal wall and does not allow them to take up residence. The E. coli forms biofilms and these biofilms can lead to the chronic itching that most often happens to suspected yeast sufferers.

When Floraphage is combined with a good biofilm digesting yeast eating enzyme such as Biofase, and a yeast killing immune system stimulating probiotic such as Profase; you can not only get the yeast infection under control, but will also remove any pathogenic E. coli. Good bacteria levels go through the roof which can lead to a long term recovery.

I highly recommend that Floraphage be incorporated into any yeast or bad bacteria cleansing program. It's safe to take long term and has been proven to do what they claim, kill E. coli and boost good bacteria numbers. I would take it with Biofase and Profase. All you need is one capsule taken at the same time to achieve good results.

The article talks about bacteriophages and their potential as therapeutic agents to selectively kill bacteria of interest. Overall facts about bacteriophage are correct in the article. I am not endorsing the product mentioned in the article, however, it has been shown in experimental results that floraphage was actually able to enhance the proliferation of Bifidobacterium, Lactobacillus, Bacillus, and Saccharomyces. It also reduced the growth of E. coli, as shown in the source cited in the above article. The enhanced proliferation of Bifidobacterium longum, Bifidobacterium breve and Lactococcus lactis have been shown in the cited literature, and it would have been better if similar experimental evidences had been provided for other bacteria mentioned in the above article such as B. bifidum, L. acidophilus, L. paracasei, L. casei, L. rhamnosus, and B. subtilis.

Bacteriophages are virus that infect bacteria Bacteriophages have been regarded as safe ingredients by the United States Department of Agriculture, Food Safety and Inspection Service. (1)

Bacteriophages may be used in complimentary to antibiotics and might not replace antibiotics in every case, as bacteriophages are larger which limits their access across physiological membranes such as blood-brain barrier, and as they are virus, they might be recognized and eliminated by the immune system before they are able to reach the site of infection.

Have Any Questions About Floraphage?

Do you have any questions about Floraphage or yeast infections in general? Ask your question here or contact us using the contact page of this website. It is also always a good idea to talk to your doctor as well.

I'm especially curious because PreforPro lists its bacteriophage mix in better detail (like, compared to not at all). Would love a heavily researched answer …