Lactoferrin for Your Immune System: Does it Work?

Lactoferrin is a protein substance that comes from colostrum in mothers milk. It is also a cytokine and they are chemical messengers responsible for human immune response that protect us from tumors, cancers, and other infections and foreign pathogens. Low levels lead to immune system suppression and high levels can lead to an over active immune system.

It has the ability to bind iron which is used by many foreign pathogens, cancers, and yeasts and other fungi for growth and reproduction.

Dr. Suzanne Noble with UCSF School of Medicine in San Francisco, CA found that candida also uses the iron molecule as a means of growth and development of its biofilm. This iron binding effect helps starve the yeast, bad bacteria or tumor so it eventually dies without harming good bacteria that don't use iron for survival.(Source)

Candida albicans was found to be inhibited because of its unique ability to stimulate phagocytes that eat candida yeast and other foreign organisms. It also was found to have an effect on the cell membranes and mitochondria of the candida cell 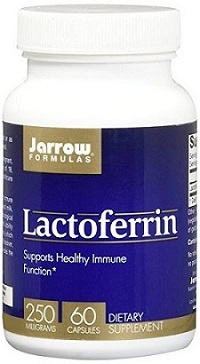 In 2004, Infectious Disease Microbiologist Antonella Lupetti with seven other colleagues from the Department of Infectious Diseases at the Leiden University Medical Center in the Netherlands found that lactoferrin works synergistically with fluconazole against fluconazole-sensitive C. albicans strains as well as C. glabrata, C. krusei, C. parapsilosis, and C. tropicalis.The study was published in the Antimicrobial Agents and Chemotherapy Journal under the American Society for Microbiology.(Source)

Lactoferrin contains certain molecules that are toxic to bad bacteria, yeast, and molds of all types. It also inhibits the growth of HIV and other viruses such as herpes. It has the ability to kill and resolve h. pylori infections that cause stomach ulcers.

Staphylococcus aureus, Escherichia coli, and Klebsiella pneumoniae all of which are capable of causing serious illness, are all inhibited by lactoferrin in the body.

Studies done in Japan on mice revealed a marked reduction in bad bacteria and especially the pathogenic bacteria known as Clostridium. The tests also revealed that it limited the bad bacteria that were able to pass thru the intestinal wall and enter the blood stream there bye preventing serious illness. The positive effects on Clostridium difficule, a bacteria infection most commonly associated with antibiotic use, where further verified by Molecular Biologist C. H. Chilton from Leeds Institute for Molecular Medicine, published in the Journal Antimicrobial Chemotherapy in 2016. (Source)

Other experiments have revealed a inhibitory effect against HIV and Herpes Simplex 1.

Because an individual with normal levels of lactoferrin secretes the substance in other body fluids. It has been found to prevent dental carries and eye diseases.

A 1999 study in Japan showed lactoferrin inhibits hepatitis C virus viremia in patients with chronic hepatitis C.(Source) However, a study in 2006 showed that it didn't have any viral effect in Hepatitis C patients.(Source)

Not only does it stimulate phagocyte activity but also neutrophils, which are the primary t-cell responsible for the defense of the body from candida and other fungi. Macrophage function is also boosted along with lymphocytes.

Lymphocytes are another type of immune cell that secrete antibodies and directly attack foreign pathogens. One type of lymphocyte is known as a Natural Killer cell, or NK cell for short, and NK cells can kill Candida yeast in 6/100ths of a second. When an NK cell acquires a target and attacks it, the target always dies without fail.

Other studies in Japan on mice given a highly metastatic type of cancer, it significantly slowed the growth and spread of the cancer. There have been many theories about why it works for cancer, from its iron binding ability, or its ability to bind to receptor sites on the cell.  However, the increased lymphocyte activity is also responsible for cancer cell death.

There has also been evidence that it suppresses blood vessel formation which cuts of the cancers food supply. Whether all these things are happening or not, it does not take away from its proven effectiveness.

There have been cases of some remarkable cases of cancer remission in the terminally ill people. Once such woman in New York with lung cancer had a startling turn around within weeks, gaining 14 pounds and achieving increased muscle strength.

Is Lactoferrin Safe to Take?

In very high doses, lactoferrin can cause skin rashes, loss of appetite, fatigue, chills, and constipation.

It is perfectly safe when consumed in foods.

Pregnant women should avoid lactoferrin supplements until more is known.

In my personal opinion, lactoferrin is far superior to colostrum and most other immune system stimulating substances, except for maybe Beta-Glucans.

As good as it is though, is not an end all by itself and other beneficial products for Candida yeast should be taken with it. One of those that would be most effective and not allow the Candida yeast to build any resistance is Biofase with Profase. These three products would make for a very potent and safe treatment for almost any yeast infection.

The facts mentioned in the article above are correct, and the article provides the results of several scientific experiments, however, the references from which the results were discussed have not been cited in all the cases. I would recommend the writer to include the citations so that the article will be more convincing and people who want to take in depth look at those literatures will be satisfied. (Done)

It has been mentioned in a review article published in Annual Review of Nutrition in 1995 that the content of lactoferrin greatly varies among the milks from different species, for instance, lactoferrin is present in high concentration in human milk while low concentration is found in cow’s milk. (1)
The same review paper mentions the logics and hypotheses as how and why lactoferrin has antimicrobial property. Role of lactoferrin as a growth factor is also discussed in the paper.

As mentioned in the article above, lactoferrin, as an iron binding protein, can prevent multiplication of microorganisms, and has been implicated in the treatment of candidiasis, cancer, herpes, HIV, which have been reviewed in another review paper published in The Indian Journal of Pediatrics (2) , which discusses about the components and roles of colostrum, and lactoferrin is one of the components found in colostrum.

Back to Immune System Supplements Home