Some Foods Cause Yeast Infections

Dr. Vibhuti Rana, PhD says... The information mentioned in this article about the effects of different types of foods on yeast infections is medically correct.

Many foods cause yeast infections over time because they weaken your immune system. This article takes a look at the worst offenders and offers tips on how to get your diet under control.

According to the USDA, the average American consumes 158 pounds of sugar a year and sugar or simple carbs are yeast’s preferred food source.

High sugar foods cause yeast infections by feeding the yeast in the body allowing it to grow and spread. Under the right conditions, one being a plentiful food source, yeast can double its population in an hour. Sugar is also by far the number one thing that can wear down your immune system. It is worse than smoking.

Not only does this sugar feed yeast, but this over consumption of sugar and fructose is creating a Type 2 diabetic epidemic in America. Obesity is at an all time high from sugar, fructose and processed grains. Processed grains are turned to sugar when digested. The pancreas kicks in some insulin that picks up the sugar and deposits it on the body as fat. Fat is the fuel the body was originally designed to run on, not sugar.

Grains Can Contribute to Yeast Infections 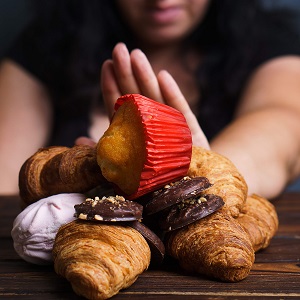 Other foods cause yeast infections because of how they are digested in the body. Grains for instance have glycemic loads higher than sugar itself and are turned to sugar very quickly when digested.

How can this be, you wonder? Grains are usually stored in silos for extended periods of time. They can be stored for years before they are ever sold and brought to market for food processing. During this time, they grow molds in these silos. Now I would assume when they go to process these grains for human consumption they would wash them, but the molds and mycotoxins will enter into the inside of the grain as they try to break them down into dirt. The grains get ground up for processing, and the rest is history. The worst of these grains, as far as mold contamination, are sold for livestock feed, pet food and alcohol processing--beer mostly.

Grains have also replaced vegetables in the average diet and have tilted the preferred alkalinity of the body to acidic. This chronic acidity damages the body over time which greatly reduces immune function.

Other foods that can be a cause of yeast infections are peanuts, walnuts, corn, and red apples, which can grow mold on them as they grow. Peanuts also are the most genetically engineered food on the planet. If you eat peanuts, I would stick to organic Valencia peanuts that are grown in a much drier environment.

These foods can kill the beneficial bacteria in our digestive system because of the molds they are contaminated with. They also allow the yeast to grow since the yeast eats the sugars in these foods. They often sit in the intestine and ferment during digestion, which causes a condition known as dysbiosis, or toxic colon. These toxins alter good bacteria levels and yeast gains the upper hand.

Mycotoxins from molds and fungi are also known cancer-causing agents that are released by molds and yeasts. One of these mycotoxins, called aflatoxin, happens to be the most carcinogenic substance on earth. In the common diets of today, grains are consumed in all three meals in some form, from cereals to breads and pastas. So every day the average American is consuming .15mg to .5mg of aflatoxin.

The western diet of today, due to sugars and molds in the foods we eat, is a cancer-promoting diet. The addition of these sugars allows the yeast to thrive in people that have these infections and allows it to inject its own mycotoxins into your body. This will suppress the immune system and lead to other autoimmune system diseases such as cancer, lupus, multiple sclerosis, Crohns, arthritis, skin disorders, chronic fatigue, depression, fibromyalgia, etc. if left untreated.

Modern farming has stripped the soils of all minerals and vitamins, so foods have very little nutritional value any more. According to a report released at the 1992 Earth Summit, the USA has the worst soil in the world - 85% depleted of minerals. The rest of the world’s soils are not much better, with South America and Asia's soils being 78% depleted, Africa 75%, Europe 70%, and Australia 58%. This means the potency of our food supply is not able to sustain optimum health. Is it any wonder we are overweight and chronically ill? We are literally starving to death from the lack of nutrition in spite of stuffing ourselves constantly with the so called healthy foods!

The pesticides that are being used also kill beneficial soil based bacteria that used to be a part of our diets from the family farms of old.

Corn and soy are now genetically engineered to accept treatments for weeds with the pesticide Roundup. Roundup is now commonly applied to wheat crops 2 weeks before harvest to increase yields. Roundup kills your good bacteria in your gut, more information here.

We add chemicals to dairy foods to give it a longer shelf life while stripping it of nutrient value.

Our cows, pigs and chickens are given antibiotics that ultimately end up in our gut when we eat their meat and these antibiotics can cause yeast infections by promoting dysbiosis. They also shove these cows into unnatural feeding environments and fatten them up with grain foods and hormones that can be a cause of yeast infections as well. The meat can become loaded with mycotoxins from these molds. You eat it, and it is passed on to you.

Most of our food is over cooked, processed, and enzymatically dead, this causes the pancreas an additional load, and it must create more enzymes to digest these foods. The metabolic enzymes are forced to help out with digestion when they should be helping repair cells and removing wastes.

Chlorine is added to the water supply to kill parasites, microbes, and bad bacteria present in our drinking water supply, this is a good thing. But when you drink this water directly from your tap, the chlorine kills the good bacteria in your intestines. To chlorine, bacteria is bacteria, it doesn't know the difference between good or bad.

Fluoride is added to the water supply and is a poison that kills enzymes. Enzymes are the building blocks of all life and work on the cellular DNA level, as well as in the process of digestion and immune system health. Fluoride has also been found, when used for cooking, to release toxic metals from common cooking utensils.

In order to remove the chlorine and fluoride from the water you drink. I recommend you get a reverse osmosis water filter and use this water to not only drink, but to also cook with. It is the only system that will remove 90% of the fluoride from your drinking water, which is better than nothing. These systems also remove other common contaminants like chlorine and will last a lifetime.

Bottled spring water in independent testing is not always safe either. A lot of so-called spring water is really just filtered tap water. The industry is not regulated very strongly, so you can't always be sure what you are really drinking.

It is becoming more and more necessary to take supplements every day to maintain a healthy body and a healthy immune system. Even the AMA recently suggested that everyone in the country should be on a multivitamin/mineral supplement.

I should also add that candida yeast infections in most cases cannot be beaten with diet alone, it simply will not work without good supplements to kill it and support cellular health.

The trick is to take quality supplements and eat mostly good fresh foods. Drink plenty of clean fresh water to flush out poisons and wastes from the body while minimizing environmental toxins in the home.

The benefits? You will go through life healthier, more energetic, happier, and live to a ripe old age, if you so choose.

So how do we avoid these molds and antibiotics in our foods that can be a cause of yeast infection?

In many stores around the country you can buy grass fed, hormone and antibiotic free beef. Buy it, eat it, and simply don't buy the rest.

I would also stay away from farm raised fish because of the mercury, pcb's, dyes and other chemical contamination.

Cut down on grain foods that cause yeast infections drastically by eliminating the chips, cookies, cakes, cereals, and pastas. Substitute pastas with wild rice or the alternative grains like quinoa.

Eat more organic eggs for breakfast and organic milk if you must consume milk. And don't worry about cholesterol, which is caused by eating grains, sugar, and trans fats and is also an immune system response to these mycotoxins from fungi. Take away the mycotoxins and junk food and your cholesterol will be just fine.

It's not hard to eat right if you want to. So, you can avoid foods that cause yeast infections and other diseases. It just takes a little effort and discipline.

Firstly, it is correctly mentioned here that different food production and storage methods in the modern day have paved way for increased mold formation within the food structures. Unknowingly, despite of refinement and washing, we are unable to get rid of these fungi and they are consumed as such and can cause acute or chronic toxicity in humans. This contaminated food is the biggest source of mycotoxins entering our bodies. Mycotoxins can be found maturing corn, cereals, soybeans, sorghum, peanuts, and other food crops in the field. (1)

Many countries across the world have laid down regulations in context to aflatoxins (B1, B2, G1 and G2), aflatoxin M1, trichothecenes (deoxynivalenol, diacetoxyscirpenol, T-2 toxin and HT-2 toxin), fumonisins (B1, B2, and B3), agaric acid, ergot alkaloids, ochratoxin A, patulin, phomopsins, sterigmatocystin, and zearalenone- the most common mycotoxins found in food. (2)

Cinar and Onbasi, in a recent chapter published in 2019, discuss that mycotoxins are majorly produced by molds such as Aspergillus, Penicillium, Fusarium, and Alternaria. Industries are attempting to employ various methods to eliminate the fungal contamination in food products too. (3)

As written in the above article by Dan, nutrient loss is the major concern for all the humans in today’s time. Sadly, this loss can be compensated by no natural means and we need adequate supplementation in our diets. Oxford Vitality states that the main supplements that need to be restored in our bodies are folic acid, omega three, iron, vitamin D and Vitamin B12. (4)

Any Questions About How Certain Foods Can Cause Yeast Infections?

Do you have any questions about how certain foods can cause yeast infections or yeast infections in general? Ask your question here or contact us using the contact page of this website. It is also always a good idea to talk to your doctor as well.

Back to Foods Cause Yeast Infections Home