Should You Eat Corn and Soy on the Candida Yeast Diet?

Dr. Vibhuti Rana, PhD says... The article below discussing the ill effects of over consumption of corn and soy grains is medically correct.

Corn is a human invention that never grew in the wild. It is believed that people living in central Mexico developed this crop about 7000 years ago from teosinte grass. Teosinte kernels were small and after years of selective breeding, the plant has evolved to how it looks today. Sadly, it cannot grow without fertilizers.

Most people think corn is a vegetable. It is not; it is a grain.

Its major extract is fructose corn syrup, a simple reducing sugar. It is most commonly found in soda and the average American consumes 56 gallons of soda a year. It is second only to soybeans as the highest rank in genetically engineered foods.

Hepatologists Metin Basaranoglu, Gokcen Basaranoglu, and Elisabetta Bugianesi published a study in Hepatobiliary Surgery Nutrition in April of 2015 pointing out that fructose causes fatty liver disease, elevates triglyceride levels, elevates serum uric acid levels and gut derived endotoxemia when over consumed. Over consumption is of course, easy, when it is found in almost all processed foods. 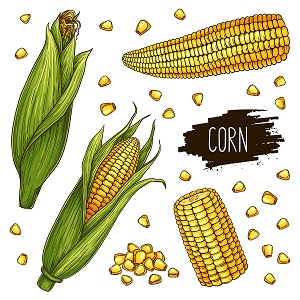 Endotoxemia is defined as "the presence of endotoxins in the blood, which, if derived from gram-negative rod-shaped bacteria, may cause hemorrhages, necrosis of the kidneys, and shock". Many species of bad bacteria do like fructose for food.

Recent research has suggested that corn was responsible for totally erasing certain Native American tribes. With the arrival of the Spanish and their discovery of corn, it subsequently spread throughout the New World. The non corn growing Native Americans' eating patterns shifted away from a hunter-gatherer society to a diet based mostly on corn. Researchers have studied the bones of these tribes before and after the introduction of the plant. They found that after the introduction of corn in their diet, they had a much higher incidence of anemia, osteoarthritis, dental cavities, infections and other health issues not evident earlier.

An article in the Wall St Journal on Feb 23rd 1998, "Corn Crop Peril", refers to a substance called aflatoxin that infects corn, peanuts, and other crops. Aflatoxin is produced by the fungi Aspergillus and is the most toxic substance in the world.

Another article in the Wall St Journal on July 29th 1998, "Texas Journal", revealed that 62% of the corn crop was contaminated by aflatoxin with levels as high as 1000 parts per billion. The grain was rejected for human consumption but was approved for animal consumption!

Folks, they feed this stuff to cows and your pets! Any veterinarian will tell you that dogs have a higher cancer rate than humans. I wonder why? Check your labels on your pet foods and if it contains corn put it back on the shelf!

Two new studies that were picked up by Reuters and Fox news found mercury in almost half of the samples tested of high-fructose corn syrup. In addition, almost a third of the products which listed HFCS as the first ingredient contained mercury.

“Mercury is toxic in all forms,” said Dr. David Wallinga of the Institute for Agriculture and Trade Policy and co-author of both studies. “Given how much high-fructose corn syrup is consumed by children, it could be a significant additional source of mercury never before considered.”

And yeast can be an immune system reaction to mercury. Swell huh? Not to mention that bad bacteria likes to eat the stuff and as this study on fructose, that was published in Mycopathologia in 1996 about fructose points out, it also feeds candida yeast.

Soy Foods and Your Health

There is a lot of information about soy not being the health food it is claimed to be. There are also tons of studies suggesting it is good for you. All you have to do is do a Google search to find the research from both sides of the ongoing argument. I believe the truth is somewhere in between and soy in moderation is best way to go.

From what I've read and I've read a lot from both sides, the fermented soy products are the best soy foods to eat. They reduce the questionable trypsin inhibitors and phytic acid/phytates that can cause negative health effects by impairing mineral absorption. They include tempeh, miso, and tamari. If I were a soy eater, I would keep it to one serving or less a day.

However, most soy now, like corn, has been genetically engineered to be resistant to the pesticide Roundup. That way the farmer can aerial spray his soy crop to kill weeds without killing the soy. Roundup kills your good bacteria and here's how it does it. Kill enough, and yeast will grow out of control.

The Bottom Line…the sugar from grains no matter how "whole" feeds Candida yeast and destroys your immune system, plain and simple.

Firstly, it is truly written here that Zea mays, maize, or corn was never an original crop or a staple crop in America. It was introduced with the help of fertilizers and selective breeding. Now, the United States produces 40 percent of the world’s corn supplies and accounts for more than half of world corn exports. (1) Most essentially, starch is its main carbohydrate constituent, comprising 28–80% of its dry weight. Corn also provides sugar and lacks the essential amino acids. (2) Fructose corn syrup, which is a high fructose source of corn, has numerous pathophysiological ill effects associated with heart diseases, diabetes and other metabolic syndromes. (3)

Grains like corn are filled with phytates that hinder the absorption of other minerals like zinc and iron from your body. In addition, it may also contain mycotoxins like fumonisins, aflatoxins, and trichothecenes, which invite myriads of fungal infections in those who include corn in their regular diet. (4)

As we all know, gluten is bad for health. Allergies to gluten are manifested in different forms by different people. The corn plant contains the protein “zein”, which is more or less like gluten. Studies have shown that though the extent was smaller than gluten, zein caused inflammatory reaction in people with ciliary disease. (5)

As the article says, soy benefits the body when consumed in a moderate amount, with greater preference being given to the fermented soy products. (5)

Return to the Candida Diet Page