Can Roundup Cause Yeast Infections?

Dr. Vibhuti Rana, PhD says... The information below as related to the use and harmful effects of Roundup in wheat agriculture is correct.

Though this article mainly focuses on Roundup and wheat, it also applies to any plant food that has been exposed to it. Because glyphosate herbicide in Roundup kills good bacteria, it will allow yeast to get out of control and eventually give you a yeast infection. Read on and you'll find out exactly how it does this.

Commercial wheat farmers have always had the problem of their wheat field not ripening evenly, greatly reducing yields. But in 1980 someone came up with the idea that if you spray the wheat field with Roundup, effectively killing it, you could then harvest the wheat that was green. The idea caught on and thus began the standard practice of application of Roundup.

The practice of course has dramatically increased the amount of wheat a farmer is able to harvest. No more green spots to worry about when they run their harvesting machine through the field!

According to Dr. Stephanie Seneff of MIT who studied the issue in depth, "Using glyphosate as a drying agent just before harvest became common practice in the 1990’s and now most of the non-organic wheat in the United States is contaminated with it."

Seneff explains that when you expose wheat to Roundup, it actually releases more seeds resulting in a slightly greater yield: “It ‘goes to seed’ as it dies. At its last gasp, it releases the seed” says Dr. Seneff.

Here’s what wheat farmer Keith Lewis has to say about the practice: 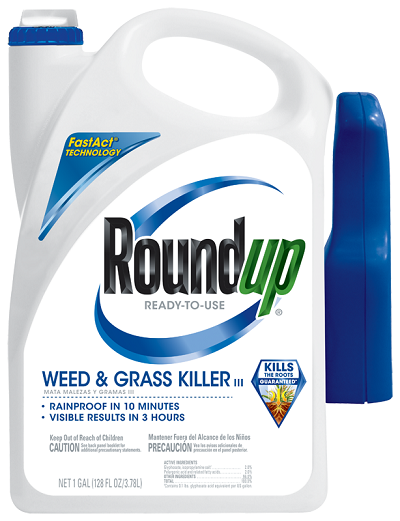 “I have been a wheat farmer for 50 yrs and one wheat production practice that is very common is applying the herbicide Roundup (glyposate) just prior to harvest. Roundup is licensed for preharvest weed control. Monsanto, the manufacturer of Roundup claims that application to plants at over 30% kernel moisture result in roundup uptake by the plant into the kernels. Farmers like this practice because Roundup kills the wheat plant allowing an earlier harvest.

A wheat field often ripens unevenly, thus applying Roundup preharvest evens up the greener parts of the field with the more mature. The result is on the less mature areas Roundup is translocated into the kernels and eventually harvested as such.

This practice is not licensed. Farmers mistakenly call it “dessication.” Consumers eating products made from wheat flour are undoubtedly consuming minute amounts of Roundup. An interesting aside, malt barley which is made into beer is not acceptable in the marketplace if it has been sprayed with preharvest Roundup. Lentils and peas are not accepted in the market place if it was sprayed with preharvest roundup….. but wheat is ok.. This farming practice greatly concerns me and it should further concern consumers of wheat products.”

Wheat farmer Seth Woodland of Woodland and Wheat in Idaho had this to say about the practice of using Roundup as a drying agent:

“That practice is bad. I have fellow farmers around me that do it and it is sad. Lucky for you not all of us farm that way. Being the farmer and also the president of a business, we are proud to say that we do not use roundup on our wheat ever!”

The Food Standards Agency in the United Kingdom says Roundup is commonly used a wheat drying agent and most of the bread on the market in the UK now contains glyphosate residue. However, Roundup has been banned in the Netherlands and many European countries are probably going to do the same.

Using Roundup on wheat crops as a drying agent just prior to harvest may save the farmer money and increase profits, but it is devastating to the health of the consumer who ultimately consumes the glyphosate residue laden wheat kernels.

A December 2013 study published in the Journal Interdisciplinary Toxicology  attempted to correlate glyphosate pathways to autoimmune disease; found a direct correlation to the rise in this farming practice and a corresponding rise in the incidence of celiac disease.

A 2013 study that was published in the Journal Entropy Entropy in 2013 and written by Anthony Samsel and Stephanie Seneff of MIT found that glyphosate inhibits the cytochrome P450 (CYP) enzymes, and is an overlooked component of lethal toxicity to mammals.

The active ingredient in Roundup lethally disrupts the all important shikimate pathway metabolites found in beneficial gut microbes which is responsible for the synthesis of critical and essential amino acids.

Good intestinal bacteria play an important role in human health. They aid digestion, prevent leaky gut syndrome (which encourages the development of autoimmune disease), synthesize vitamins and are responsible for 75% of human body functions. Most importantly, they prevent the over growth of yeast.

In essence, Roundup significantly disrupts the functioning of beneficial bacteria in the gut and contributes to leaky gut syndrome which can lead to autoimmune diseases. Not to mention that Roundup was originally patented as an antibiotic.

Antibiotics cause yeast infections because they reduce bacterial levels in the gut, which allows yeast to get out of control.

With the disruption of important amino acids via the shikimate pathway, glyphosate inhibits the cytochrome P450 (CYP) enzymes produced by the gut microbiome. CYP enzymes are critical to human biology because they detoxify the multitude of foreign chemical compounds that we are exposed to.

As a result of eating Roundup poisoned foods, you become more vulnerable to the damaging effects of other chemicals and environmental toxins you are exposed to on a daily basis.

It takes years of exposure to reach critical levels, which then begin to cause widespread inflammation throughout the body.

Dr. Seneff’s study of Roundup’s ghastly glyphosate, which the wheat crop in the United States is doused with, uncovers the manner in which this lethal toxin harms the human body by decimating beneficial gut microbes with the tragic end result of disease, degeneration, and widespread suffering.

Even if you think you have no trouble digesting wheat, it is still very wise to avoid conventional wheat as much as possible in your diet.

If you don't have a wheat or gluten allergy, in order to avoid inflammatory diseases and chronic yeast infections, it has become extremely important to not eat modern commercially produced wheat.

The increase in the amount of glyphosate applied to wheat closely correlates with the rise of celiac disease and gluten intolerance. Dr. Seneff points out that the rise in these diseases are not just genetic in nature, but also have an environmental cause as not all patient symptoms are alleviated by eliminating gluten from the diet.

Just because you don't have any symptoms now, you will at some point in the future if you continue to consume non organic wheat products. This also applies to GMO corn and soy. So eat organic. Unfortunately, glyphosate has now been found to be in 100% of California produced wines as well.

How to Eat Wheat Safely

Obviously, if you’ve already developed a sensitivity or allergy to wheat, you must avoid it. Period. Treating yourself for Candida yeast in the hopes it is going to solve the allergy is not the solution, it won't work. This is an entirely different issue.

But, if you aren’t celiac or gluten sensitive and would like to consume wheat safely, you should only eat organic, preferably low gluten, unhybridized Einkorn wheat.

When it comes to corn and soy or any other food that has been exposed to Roundup, eat organic as well.

Yes! This is scary. I can tell myself how calm I became after giving up sugar & wheat. Even my employees commented on my new demeanor. It's sad more aren't educated. I have helped a handful of people.  They can't thank me enough & that feels great. Thank you for all of your great info.

It is evident from the article that Roundup-the most popular and dangerous herbicide is a strict NO for all the wheat consumers. Roundup was introduced and patented in 1973 in the US. The company Monsanto that produces Roundup also produced the genetically modified seeds (GM seeds) which could be used by farmers for obtaining “Roundup Ready Crops”, that are resistant to the glyphosate component of Roundup.

Unfortunately, these crops are sterile and are called Terminator Seeds. Each year, farmers must purchase the most recent strain of seed from Monsanto, meaning that farmers cannot reuse their best seed. (1)

In addition, the weeds and pests may also become resistant to Roundup by its repeated use, posing a greater danger. EPA has found that consumption of glyphosate from the use of Roundup in fields is not fit for ingestion. Most recently, Dewayne Johnson won a lawsuit against Monsanto for his non-Hodgkin lymphoma. (2)

Very recently, a collaborative evaluation by University of California, University of Washington, and Icahn School of Medicine at Mount Sinai, New York suggested that Roundup and other glyphosate-based herbicides is not as safe as the company claims it to be. Using it, and consuming it, increases the chances of developing non-Hodgkin lymphoma by 41%. (3)

A study found that Fusarium graminearum and F. avenaceum, the fungi that cause head blight disease in wheat, grow rapidly when glyphosate-based weedkillers are added to the growth medium. Roundup essentially messes the gut microbiota, causing dysbiosis and giving the opportunistic yeast and chance to grow and flourish. (4)

In 2012, it was proven in Thailand that toxicity of polyoxyethylene amine and Roundup existed because of their ability to erode mucous membranes and linings of the gastrointestinal and respiratory tracts. (5)

Therefore, the best way to stay away from these ghastly diseases is to avoid Roundup associated crops and have an organic approach towards your diet.

Back to Yeast Infection Prevention Diet

Back to Cause of Yeast Infection

Any questions about Roundup or about yeast infections in general, please feel free to contact us or talk to your doctor.