Dr. Vibhuti Rana, PhD says... The information below regarding the role of yeast infections in Crohn’s disease and Inflammatory Bowel Disease is medically correct.

Could Crohn’s disease and Irritable Bowel Syndrome (IBS) really be caused by chronic intestinal yeast or fungal pathogenesis? Equally important is how these other fungal initiators of disease gain entry to the body? In most cases, they enter through the mouth from contaminated foods. Soon after, they often become activated from antibiotics, steroids, and other modern drugs that destroy the healthy stomach bacteria.

Once they get a hold on the digestive system yeast and their mycotoxins penetrate the lining of the stomach, cause inflammation in the intestinal lining, massive lesions like ulcers, and there’s no turning back. What’s more, the typical western diet continues to feed them their favorite food, which of course supports them in growing and spreading throughout your body. It is very common to have bloating, belching, intestinal gas, constipation, diarrhea, indigestion, and acid reflux as some common symptoms. What do you expect to happen once these microbial enemies pierce the lining of the stomach and enter the blood stream? Can they be stopped from wandering anywhere in your body?

The common symptoms of crohns disease may include, diarrhea, abdominal cramps, rectal bleeding, weight loss, fever, and of course all other symptoms of a digestive systemic yeast infection. Additional symptoms may also include disorders of the eyes, liver, gallbladder, muscles and joints, kidneys, and skin. (Journal of Musculoskeletal Medicine Nov. 1996) 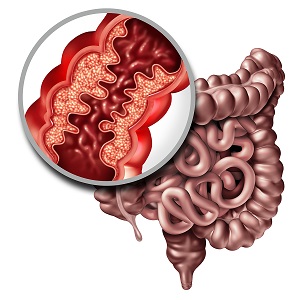 Not surprisingly these two intestine - affecting diseases are most prevalent in the United States; which is more than likely due to the high amount of processed foods in our diet and the use and over prescribing of antibiotics.

Many existing studies indicate that indeed antibiotics, chemotherapeutic agents, steroids, and corticosteroids can significantly reduce normal intestinal bacteria levels, allowing the fungi to attach to the mucus lining of the intestines in immuno suppressed individuals.

Who are the immuno suppressed group of people? Scientists have shown that immune functions and strength has declined by 25% in adults as compared to 1960. Meanwhile, our farmland soils are now 85% depleted of nutrients that are required for maintaining a healthy diet. (1992 World Earth Summit) These nutrients cannot be absorbed in the plants or the vegetative flora if it is not in the soil.

The fungal species that can be involved are Candida albicans, and Candida tropicalis are the most prevalent species that infect the gastrointestinal tract as well as the entire human body. However, in 2016, a report  pointed out that Candida glabrata is over represented in Crohn’s disease patients.

It is possible that Blastomyces dermatitidis, Coccidioides immitis, Histoplasma capsulatum, and Paracoccidioides brasiliensis can infect the digestive system and can be ascribed to Crohn’s disease and IBS mimicking their symptoms?

When it gets to the point of such a debilitating disease can also enter other organs - the liver, spleen, and lungs being the first targets. From there these fungal agents, especially the Candida species, possess the capability to get into every organ in the system. Unfortunately, most of the times these systemic yeast infections remain undiagnosed till the time an autopsy is conducted.

One thing is clear; when Candida yeast gets to the point of causing Crohn’s or irritable bowel syndrome symptoms, every single patient has been recorded to have a deficient or weakened immune system deficient in one way or another.

If you suffer from any of these two diseases I think it would be worth your time and effort go on the Diet recommended on this website and try a few proven supplements for at least a month. If you feel better and your symptoms are improved, then it is safe to assume you have found the cause of your illness as an intestinal yeast infection. Then you can take the necessary steps in your life to get rid of it or keep it at bay, much like a diabetic.

Inflammatory Bowel Disease (IBD), including Crohn’s disease, has been linked with fungal infection of the gastrointestinal tract. With the recent advancements in the field of next-generation sequencing and metagenomic analyses, it has been more evident than before that these digestive tract illnesses have a close relationship with the fungal population present inside the gut (1). In a paper published in Gut journal, analysis of fecal samples from patients with inflammatory bowel diseases revealed that the relative ratios of pathogenic yeasts, including Candida albicans, were higher than healthy individuals (2). In another study, a similar phenomenon was observed where Candida glabrata species were highly present in the intestine of patients with Crohn’s disease (3). It is evident that the diet we consume directly affects the intestinal microbiota. A diet most commonly consumed in Western societies, in addition to antibiotics use, increases the colonization of Candida albicans in the intestine (4).

A comprehensive review published by Stamatiades et al in 2018 discusses about all the available evidence suggesting the role of fungal infections in patients suffering from IBD. (1) This study also shows that the respiratory tract and the GI tract are most affected sites, especially in IBD patients undergoing anti-TNF alpha agents. Prof. Chris Probert from University of Liverpool says that the percentage of antibodies against some fungi is substantially higher in patients with Crohn’s as compared to those without the disease. (2) Similarly, chemical markers specific for fungi were also found in the stools of the Crohn’s patients and not the healthy controls. He concluded that the western diet tends to contain a large amount of yeasts, especially Saccharomyces and Candida, found to trigger inflammation in mice. This was simultaneously accompanied by a decline in the good bacteria Faecalibacterium.

Another study conducted over a period of 7 years across 10 European countries by a group of doctors led by Dr. Andrew R. Hart, MD, says that the role of diet in the etiology of IBD is plausible. (3) Western diet rich in yeast, sugar, and carbohydrates has been shown to cause dysbiosis and further lead to IBD in mice. (4)

Have Any Questions About Crohns Disease or IBS?

Do you have any questions about Crohns disease, IBS, or yeast infections in general? Ask your question here or contact us using the contact page of this website. It is also always a good idea to talk to your doctor as well.

Can Alkala-N taken as suggested cause diarrhea?

I've cured my long term (15 years or so) IBS(?) with a very complicated recipe of top probiotics combined with many different kinds of fiber. It was recommended …