Burdock root or Arctium lappa grows throughout Europe and Asia and consists of about 10 species of upright biennials. The common name burdock refers to the burs or fruits the plant typically bears.

Arctium is a Greek word meaning a bear, which is a name for the rough coated fruit. Lappa is Latin and means to seize, which describes how the burs will cling to passing animals.

Burdock is grown as a vegetable in Japan where it is known as gobo. The stalks of young leaves are cooked and used like celery. Roots are eaten in salads or cooked like carrots or added to stir-fries.

It has also been used for skin problems and inflammatory conditions such as eczema, psoriasis, gout, boils, sores, and rheumatoid arthritis. The Chinese have used it to treat colds, pneumonia and throat infections.

In 2014 a study was performed at the Laboratory of Microbiology and Immunology in Brazil to determine the effects of burdock root on Staphylococcus aureus, S. epidermidis, Streptococcus mutans, candida albicans, Candida tropicalis and Candida glabrata. All of these pathogenic bacteria are planktonic, meaning they build biofilms. The three species of candida build biofilms as well.

The study determined that burdock root was microbicidal for all the evaluated strains in planktonic cultures. It also had no toxic effects on the macrophages, which are white blood cells that are part of your immune system.(Source)

A study in 2017 performed by Doctor Andrada Tonea and Associates at the University of Medicine and Pharmacy in Romania, determined that burdock root has antimicrobial effects against Enterococcus faecalis and Candida albicans.(Source)

Another study that was published by scientists Rajasekharan SK, Ramesh S, Satish AS, and Lee J in the Journal Microbiol Biotechnology, was performed on the biofilm building Klebsiella pneumoniae. They found that burdock exhibited significant antibiofilm activity against K. pneumoniae and Escherichia coli and Candida albicans. They went on to suggest that arctium lappa has potential use in antibiofilm strategies against persistent K. pneumoniae infections, with added effects against e coli and candida yeast as a big bonus.(Source) 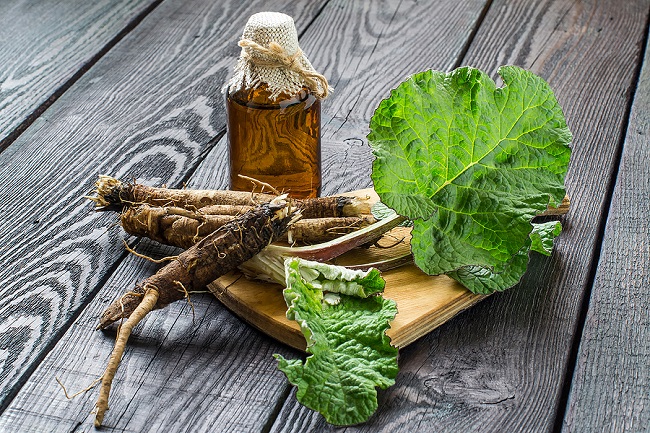 In 2015, Microbiologists Rajasekharan SK and Associates at PRIST University in India published a study concerning Arctium lappa and urinary tract infections. The study was performed against three biofilm building pathogens, mainly Escherichia coli, Proteus mirabilis, and Serratia marcescens. E. coli is the most common bacteria that causes these infections. While the study admits that the building of these biofilms in the urinary tract complicates treatment plans. Burdock was found to reduce the biofilms by 50.79% for E. coli, 69.49% for P. mirabilis, and 75.84% for S. marcescens. They also concluded that by removing these biofilms, burdock would help the host immune system fight these infections.(Source)

In 2006, research Scientist M Gentil and Associates from the University of Ribeirão Preto in Brazil, implanted 27 teeth with a bacterial mix of Pseudomonas aeruginosa, Escherichia coli, Lactobacillus acidophilus, Streptococcus mutans and Candida albicans. They separated these teeth into three groups filling them with various substances. Group two was filled with a mix of Arctium lappa and propylene glycol. At day 14 and day 30 none of these pathogenic substances were found, the burdock root had killed them all.(Source)

A published study in Inflammopharmacology in 2011 by Chan YS, Cheng LN, Wu JH, Chan E, Kwan YW, Lee SM, Leung GP, Yu PH, Chan SW from various medical departments in China, investigated all the medicinal effects of burdock. They found that the active ingredients in the root "have been found to "detoxify" blood and promote blood circulation to the skin surface, improving the skin quality and texture and cures skin diseases like eczema. Antioxidants and antidiabetic compounds have also been found in the root. Some active compounds in the seeds possess anti-inflammatory effects and potent inhibitory effects on the growth of tumors such as pancreatic carcinoma. The active compounds in the leaf extracts can inhibit the growth of micro-organisms in the oral cavity. The medicinal uses of burdock in treating chronic diseases such as cancers, diabetes and AIDS have been reported". The possibility also exists that it could cause contact dermatitis or someone could actually be allergic to it.(Source)

There are probably more studies out there proving burdocks antimicrobial effects but I think the above is enough to prove that it does indeed work for Candida yeast, Candida tropicalis and Candida glabrata. It also has an antimicrobial effect against pathogenic E coli, Staphylococcus aureus, Staphylococcus epidermidis, Streptococcus mutans, Klebsiella pneumoniae, Proteus mirabilis, Serratia marcescens, and Pseudomonas aeruginosa.

In all of these studies it also had a potent effect on all the pathogenic organisms biofilms. When you strip the biofilm the immune system sees the infection and will mount an inflammatory response to get rid of the offending organism. This killing effect can result in the release of toxins as these pathogens die, but burdock root also helps to clean the liver and blood, which minimizes the uncomfortable cleansing reaction.

Due to its blood cleansing effects, it is best to consult with your doctor or pharmacist prior to taking burdock root if you are blood thinning medications or have bleeding disorders.

If you have allergies to the ragweed family of plants, you may also be allergic to burdock.

It is found in Microfase and is also available on Amazon

I am not endorsing any specific burdock root product, but the facts about burdock root mentioned in the article above are correct. When taken appropriately considering the personal responses, burdock roots have shown to provide anti-inflammatory effect and to protect from oxidative stress in patients with osteoarthritis [1, 2].

Moreover, burdock root is reported to have protective effects in liver from carbon tetrachloride and acetaminophen-induced damage [3].

Likewise, it has also shown to accelerate the healing of acetic-acid induced gastric ulcers in rats [4].

The mechanism involved in both of these cases is predicted to be due to the antioxidant property of burdock roots. As mentioned in the article above, different parts of burdock have many pharmacological activities such as boosting immune system, improving metabolic functions, anti-inflammatory, antimicrobial, antiviral, anti-cancer, and antidiabetic activities, antibiofilm activities as well as activity against a range of microorganisms including Gram-positive, Gram-negative bacteria and Candida [5, 6].

Other beneficial properties such as anti-osteoclastogenic, anti-depressant, anti-colitis, anti-allergic, neuroprotective, aphrodisiac, hypolipidemic, anti-hypertensive have been reviewed in a recent literature[7].

There are some adverse effects reported for burdock such as allergy, anticholinergic poisoning, ophthalmia, inhibiting effect of binding of platelet activating factor to platelets [7]. Therefore, it is always wise to consider risk and benefit ratio and individual responses before using burdock.

If you have any questions about burdock root or any other questions including asking me for my assistance with your problems, please feel free to contact us through the contact page of this website.