Dr. Atmika Paudel, PhD says... the information provided below about the biological activity of B. laterosporus for yeast infections and its side effects is medically correct.

Bacillus Laterosporus BOD was supposedly discovered by Boyd J. O'Donnell in the late 1980's while he was visiting Iceland. He was intrigued by the health of the plants they grew without the aid of fertilizers. Soil samples were taken and further studies revealed the soil's growing power to be a species of bacteria that was later named Bacillus Laterosporus BOD. O'Donnell patented this bacteria as a candida yeast and Aspergillus killer in 1994 and all sub-strains thereof. (1)

1. Isolation and Identification of Brevibacillus lactosporum From Soil and Evaluation of their Antibiotic Properties. International Journal of Advanced Research in Biological Sciences. Volume 4, Issue 6 - 2017

Brevibacillus Laterosporus is a spore bearing bacteria so it survives the stomach acids intact. Spore bearing means it is basically encapsulated within itself. It does not have to be refrigerated so it will not spoil and grow molds. Once introduced to the intestine the spores begin to germinate and multiply every 32 minutes. However, this is a soil based bacteria and like all soil based bacteria, it will not set up large long-term colonies of bacteria in the intestine. The effects are transitory and the colonies will begin to die within 3 days or so.

Testing has shown it to be completely safe.

Does B. laterosporus Work for Yeast Infections? 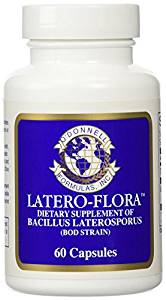 There are numerous studies published in the American Society of Microbiology journal that have been performed on over 30 substrains of B. laterosporus as an insecticide for mosquitoe's.

A published study in the Brazilian Journal of Microbiology in 2012, has shown that the compounds B. laterosporus produces does have antimicrobial activity against Streptococcus mutans, Staphylococcus aureus, Clostridium and Gram- negative bacteria such as Escherichia coli and Pseudomonas putrefaciens. It also had antifungal activities against the yeast Candida albicans.

Another published medical study in February of 2013 in Applied Microbiology and Biotechnology, reveals that B. laterosporus produces chitinase enzymes that exhibited antifungal activity against the phytopathogenic fungus Fusarium equiseti. Chitinase enzymes would also be useful for digesting the cell wall of yeast.

Just so you know, Chitinase activity is quite often found in the enzymes Cellulase and Hemicellulase.

Numerous studies published so far have supported and strongly suggested the benefits of B. laterosporus based probiotics along with its fungicidal role. The insecticidal activity of B. laterosporus has been demonstrated in different species of mosquitoes like Aedes aegyptes and Anopheles stephensis, and many other insect species (1). The same goes for fungal and bacterial killing by this microbe. In order to carry out the fungal-killing role, it secretes anti-microbial peptides, a group of molecules that can work against DNA synthesis, protein synthesis, and cell wall/membrane synthesis or inhibit enzymatic activities of the fungi (2). Essentially, enzymatic destruction of fungi has been reported in literature. Strains of B. laterosporus produce extracellular chitinase or chitinolytic enzymes that contribute to its antifungal role (3). Another patent discloses the topical use of Bacillus species and their spores or extracellular secretions to counter yeasts and fungi (4).

How To Use Bacillus Laterosporus BOD

There are a few ways to take this and I usually suggest it be taken with an enzyme for yeast at the least. However, the best way to take it would be like this:

For the first three days take 5 capsules four times a day at least 30 minutes away from food with the enzyme twice a day. After those three days drop the dose to 5 capsules two times per day and use the enzyme formula one hour before breakfast and 30 minutes before bedtime.

I do suggest you keep doing this for at least 30 days after all symptoms have disappeared. You might also want to consider using it for maintenance for a while but that is ultimately your choice.

You can take less than what I have suggested above if you wish, only you know whats best for your health and only you know how you feel. However, it could take longer to get well at lower doses, it just depends upon how bad your infection is.

Any of these Bacillus laterosporus BOD products at Amazon will work.

This probiotic is not meant to build up good bacterial colonies if you are low on good bacteria. It works best as a yeast and bad bacteria killer. CP-1 or the 11-Strain are what you should use for building good bacteria levels during the two week cycle or after on a long term basis.

Like all probiotics if you are not used to taking them it is possible during the first five to seven days to have a slight bloating, or a feeling of being plugged up, effect. It could possibly be a little harder to have a bowel movement as well. For some people it has the opposite effect and they develop very loose stools, this usually subsides in five to seven days as well.

These problems tend to clear up after that first week as the probiotic cleans you out. From there, no more problems are felt.

Based on the scientific literature, I conclude that the information provided here on the ubiquitously found bacteria B. laterosporus is correct.

This bacterial strain, found in a number of environmental sources and having potential uses as probiotic and gut health enhancer is promoted as broad-spectrum yeast destroyer, or a Candida killer. In short, it has biotherapeutic potential in food health research industry. Most of the studies I came across talk about its benefits in terms of toxin reduction and bacterial and fungal infection-inhibitors. As far as the side effects are concerned, prolonged use may interfere with the protein synthesis in your body by interacting with the cellular membranes and ion channels of the target cells (1,2). Very rarely, some immunocompromised or critically ill patients may face bacteremia, immune modulation, or gastrointestinal side effects due to overuse of Bacillus spp probiotics (3).

I am not endorsing any specific product, however, based on several scientific studies performed on Brevibacillus laterosporus (as referred in the article and below), the information provided about the biological activity of B. laterosporus is correct. B. laterosporus is relatively well-studied bacteria with more than 100 published articles from a diverse group of researchers.

Whole genome sequence and analysis has shown this species has an ability to produce various bioactive secondary metabolites (1). In line with this, B. laterosporus strains have been found to produce anti-tumor compound - spergualine (2), antibiotic laterosporamine (3), laterocidin (4), bacteriocin-laterosporulin (5), and antimicrobial peptide-BL-A60 (6), peptide-tupuseleiamides and antifungal polyketide-basiliskamides (7), lipopeptide antibiotics-tauramamide (8), thrombin inhibitors-bacithrocins (9), some of which are stable at high temperatures and wide range of pH.

The crude extracts of the cultures of B. laterosporus along with the secondary metabolites produced have diverse in vitro antibacterial and antifungal activities against various pathogenic microorganisms  such-as Staphylococcus aureus, Serratia marcescens, Mycobacterium spp, Klebsiella, and fungi such as Penicillium funiculosum and Aspergillus unilateralis (10), and (11).

The use of B. laterosporus in poultry food has been reported in scientific literatures (12).


In general, B. laterosporus is found in the natural environment and has been isolated from various sources such as- soil, water, and plants. It has been shown to be pathogenic to insects and recently the first case of human infection was reported, which occurred in a person with a pre-existing condition (13). Therefore, proper precautions should always be taken.

Have Any Questions About Bacillus Laterosporus?

Do you have any questions about B. laterosporus or yeast infections in general? Ask your question here or contact us using the contact page of this website. It is also always a good idea to talk to your doctor as well.

Would B. Laterosporus have any effect on single-cell organisms like amoeba or protozoa?

It's something I need help with to remove. Thank you.

Do you mean by enzymes: Amylase, Lactase, Protease? Is BOD also advisable for Nail Fungus?

About 6 years ago I had Mycobacterium Avium and was treated with four different antibiotics for 3/4 of a year. I have now bronchiectasis from that treatment. …