Dr. Atmika Paudel, PhD says... This is not an endorsement of any specific beta-glucans product, but to mention that the medical facts written in the article below about beta-glucans are correct and well-covered.

Beta glucan is a polysaccharide type of fiber that is typically extracted from mushrooms, mainly shitake and maitake mushrooms. It is also found in oats, barley and Bakers yeast.

The best products are more effective if they use a purification process that removes the mannoproteins and yeast residues leaving pure 1,3/1,6 beta glucans.

What Are Beta Glucans Good For? 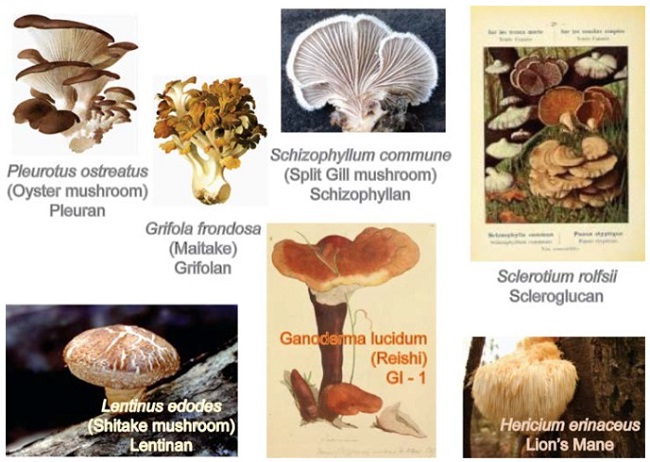 Beta glucans can be very beneficial because they stimulate neutrophil and macrophage activity throughout the body. These are the primary immune system cells responsible for removing yeasts and fungi of all kinds. They also attack foreign bacteria, viruses, and cancer cells.

Beta glucans for yeast bind to phagocytes and macrophages at certain receptor sites, which activates their infection and tumor fighting abilities. It seems to cause these cells to produce free radicals which signals the white blood cells to engulf diseased tissues, bacteria, foreign pathogens, fungi, and tumor cells.

Researchers at Brown Medical School and Rhode Island Hospital discovered that beta glucans for yeast caused the neutrophils to take a more direct route to the infection. This study seemed to indicate the enhanced ability of the neutrophils to detect foreign invaders in the body including yeast.

In a study done on anthrax and mice it was found that beta glucans for yeast stimulate the production and activation of white blood cells in the bone marrow. This results in higher levels of neutrophils and macrophages, which are the first immune system cells to defend against bacterial, fungal, and viral infections.

There are many studies at the National Library of Medicine pertaining to the effectiveness of beta glucan for the immune system.

There also have been over 1,600 research papers on Beta 1,3-D Glucan since the 1960s. Research from the prestigious medical schools of Harvard, Tulane, Baylor, and Washington Universities all attest to the immune activating properties of Beta Glucan.

As mentioned above, β glucans are the compounds essentially found in high fiber foods; they have high amounts of soluble fiber. Studies show that they have multiple health benefits which include treatment of bed sores, obesity related issues, and skin conditions like eczema and burns (1). The other common sources of these active polysaccharide compounds are mushrooms, which have been used for their healing properties in Eastern countries for ages (2). Found in reishi, maitake, lion’s mane, and chaga mushrooms, along with oats, barley, seaweeds and yeast, they have now gained equal popularity in Western medicinal-food culture. β glucans help us to maintain a healthy gut microbiome by erasing or downplaying the unhealthy, pathogenic bacterial, fungal, or viral species and uplifting the proportions of healthy microbes in the gut (3). Interestingly, fish culture has also accepted the importance of this carbohydrate in resistance of pathogenic infections or environmental stress (4).

According to doctors Adachi Y and Associates at the Tokyo University of Pharmacy and Life Science, beta glucan stimulates the production of cytokines used in cell-to-cell communication that stimulates the macrophages to inhibit tumor reproduction and to kill the tumor.(Source)

In scientific studies done on mice with cancer tumors, mice treated with beta glucans had a 28% greater survival rate than their untreated counter parts.

The Journal of the National Cancer Institute in 1975 reported that nine cancer patients were injected with beta glucan directly at the site of the tumor. All nine people had a reduction of tumor cells within five days and also experienced the subsequent destruction of the cancer from increased immune system activity.

Studies in Japan have seen a subsequent five to six-year longer life span of cancer patients that received the extract.

A 2017 study published in Pathology & Oncology Research on human lung cancer cells, showed strong anti-tumor properties of beta-glucan from oat and at the same time no toxicity for normal cells.(Source)

Beta glucans, over the course of time, have brought about a near revolution in the field of cancer care. Owing to their immune-modulating properties, they have been employed in cancer treatment, and even treating the burns of radiation therapy. At a molecular level, these polysaccharides enhance the complement system, natural killer cells, and macrophages- the major players of immune system (1). They offer a protective effect against carcinogens and inhibit the angiogenesis pathway-which ultimately prevents blood supply-or vascularization at the tumor site and keeps a check on tumor growth. Studies report that the complement receptor CR3-based killing of cancer cells can take place only in the presence of β-glucans. In essence, the monoclonal antibody-based treatment of different carcinomas and hematological malignancies is widely accepted. However, it is more efficient only when combined with additional adjuvant therapies, like supplementation with β-glucans (2). Such combinatorial therapies can cause sufficient immune-stimulation for cancer eradication or retrogression.

According to a recent double-blind, randomized, crossover study performed by Dr. DJ Jenkins and associates at St Michael's Hospital in Toronto, which was published in the American Journal of Clinical Nutrition, consumption of beta glucans fiber and psyllium four times daily is likely to significantly reduce the risk of developing cardiovascular disease. The study was so convincing, that the claim that these fibers "significantly reduced the chances of developing cardiovascular disease" was approved by the FDA.(Source)

So not only is beta-glucan good for immune function and cancer, the fiber also helps with cardiovascular health. This fact further solidifies the current medical consensus to make sure you eat enough dietary fiber every day.

β-glucans’ role in tumor proliferation has been well discussed so far. Apart from this, it plays an advantageous role in tackling a number of other health issues. It gives us a better heart health. Since it is a soluble fiber, it can be easily broken down in the intestines. This, in turn curbs obesity associated disorders. Reports say that  β-glucan derived from oats lowers the cholesterol and triglyceride levels and maintains a healthy lipid profile. A 2011 study based on past research on oat β-glucans supports that daily intake of 3 g of β-glucan reduces total cholesterol and LDL (roughly amounting to 5-7% lowering of cholesterol) (1). These findings have also been supported by the US FDA and the UK Joint Health Claims Initiative (JHCI) in past. With time, other governments, e.g., those of Canada, Australia, New Zealand, Brazil, Malaysia, and Indonesia have also supported these claims (2). Evidence also states that oat β-glucan modulates gut microbial population, which in turn, effects the cholesterol reverse transport, short chain fatty acids signaling, and bile acid metabolism (2). Positive cholesterol and LDL lowering capabilities of β-glucans have also been seen in barley, which is another complex cereal (3).

Beta glucans are likely safe when taken by mouth at doses of less than 5 grams or 5,000mgs. Which is not an issue because most supplement manufacturers recommend 500mg once or twice a day. This puts you well under the medically recommended limit.

It should not be taken while pregnant. In doing so the possibility exists that the increased immune function could cause a miscarriage.

It is possible that the enhanced immune response caused by taking beta glucans could offset any prescription drugs, such as steroids, that reduce immune function. Please talk to your pharmacist and physician about any interactions prior to taking this supplement.

There are various routes of intake of β Glucans like oral (by mouth), topical (applied to skin), intravenous, intramascular (IV or shots). Short term oral usage has no possible side effects and is generally considered safe. Rarely, fever, chills, nausea, diarrhea, join pains, or rashes may be seen when the lentinan, a β Glucan from shiitake mushroom, is administered by IV within a 10 min period due to heightened immunogenic response. If infusion is done for over 30 min, no such side effects were seen (1). Data on consumption of β Glucans in pregnant or breast-feeding women is not documented properly. 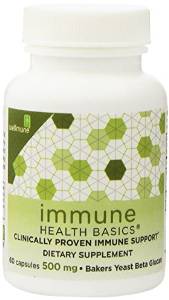 Remember this simple fact about the published research on Beta Glucans for Yeast:

The active linkage is simply the 1,3 and 1,6 linkage in the Beta Glucan product. If it's not 80% or higher, the product will not work.


Immune Health Basics Beta Glucans is an outstanding Beta Glucans product for yeast that has a very superior quality. The yeast and mannoprotein residues have been removed so the product is purer.

There is no doubt that we have been consuming beta-glucans in the form of our diet since time immemorial. Immune boosting, antimicrobial, and anti-tumor properties of beta-glucans have been well-studied and proven by many scientific literature's. Besides the facts presented in the article above, there have been recent advances in the study of biological activities of beta-glucans which I would like to include in my comments here.

Beta glucans and foods containing beta glucans have been reported to have antioxidant activity(1,2,3), meaning that they can scavenge the harmful radicals, thus preventing ageing and contributing to health as well as beauty. In addition, beta glucans have also been found to reduce systemic inflammation, renal injury and aortic calcification (4), provide cardio protection (5), and protect from testicular damage (6); thus safeguarding our vital organs.

They are also reported to accelerate wound healing by regenerating rather than repairing the skin (7), and reduce blood glucose level indicating that beta glucans may alleviate diabetes (8).

Overall, beta-glucan have numerous benefits, and owing to their presence in everyday food products, relative safety has been established, however, it might interact with medications that suppress immune system, and not enough is known about its use during pregnancy and lactation.

Have Any Questions About Beta Glucans?

Do you have any questions about beta glucans or yeast infections in general? Ask your question here or contact us using the contact page of this website. It is also always a good idea to talk to your doctor as well.

Back to Immune System Supplements for Yeast Home