Does Neem Leaf Work for Yeast and Bacterial Infections?

This article talks about Neem Leaf's effects on yeasts, bacteria and viral infections. Other health benefits and its possible safety issues and side effects.

Neem leaf (also named as Azadirachta indica, Antelaea azadirachta, Indian Lilac, Pride of China etc.) a member of the Meliaceae family, commonly found in Myanmar, India, Pakistan, Bangladesh, Nepal, and other tropical countries. Neem tree is highly prized in Homeopathy, Ayurveda, Unani, and modern medicine for the treatment of many metabolic, infectious, or cancer diseases. It is valued as Nature’s drug store on account of its extensive range of medicinal properties. 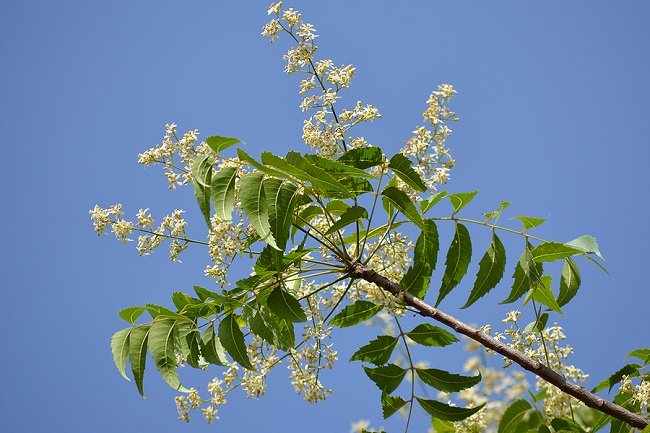 All parts of the tree including bark, flowers, stem, seed, leaves, twig, and seeds are incorporated into the medicines, cosmetics, soaps, toothpaste, mosquito repellents, etc.

Neem leaves have also shown a plethora of medicinal values such as immunomodulatory, anti-inflammatory, antihyperglycaemic, antiarthritic, antioxidant, antipyretic, antimalarial, anti-gastric ulcer, antifungal, antibacterial, antimutagenic and anticarcinogenic properties due to the presence of many bioactive principles [1, 2].

Neem presents a broad range of biologically active compounds that are chemically diverse and structurally variable with more than 140 compounds isolated from various parts of the tree. The phytochemical screening of leaf extracts showed the presence of saponins, tannins, alkaloids, glycosides, flavonoids, polyphenols, reducing sugars, HCN, and terpenes in the ethanolic leaf extract. The ethanolic extract of neem’s leaves also shown the presence of fibers, vitamins, and micronutrients. 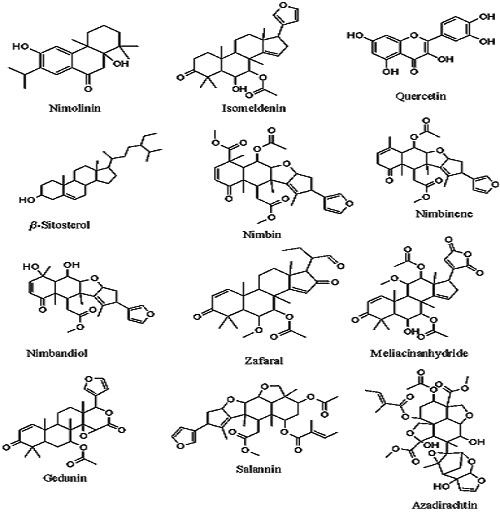 It is believed that neem leaves show therapeutic potential due to the rich source of antioxidants and other valuable active compounds such as terpenoids, saponins, and flavonoids, etc. The various parts of the neem plant show an antimicrobial role via inhibition of microbial growth and have the potential of cell wall breakdown.

Due to the presence of antioxidants such as azadirachtin, nimbolide ascorbic acid, etc. neem plays a role as a free radical scavenging agent.

Neem also plays a role as an anti-inflammatory through the regulation of proinflammatory enzyme activities including lipoxygenase (LOX) and cyclooxygenase (COX), enzymes [3, 4].

Neem leaves play role in the inhibition of growth of various pathogenic microbes such as bacteria, viruses, and fungi. People still hang a cluster of neem leaves over their doors or sprinkle them near the bed of a flu-infected patient in a belief that the air crosses the neem leaves will be filtered of the disease-causing bacteria and virus. The role of neem leaves in the prevention of microbial growth is described individually as follows.

Neem leaves have a strong antibacterial activity that works wonders on the infections, burns, and any type of skin problems. Maragathavalli et al investigated the antimicrobial potential of neem leaves towards human pathogenic bacteria, including Pseudomonas aeruginosa, Escherichia coli, Salmonella typhimurium, Bacillus pumilus, and Staphylococcus aureus. The highest potential for B. pumillus, P. aeruginosa, and S. aureus was found in comparison with standard drug Gentamycin 200 mg [5].

Mahmood et al found that the crude extraction of neem has antibacterial activity against infection of eyes and ear [8]. The antibacterial activity of extracts of guava and neem against 21 strains of foodborne pathogens like Listeria monocytogenes, E. coli O157:H7, S. aureus, Vibrio parahaemolyticus, S. Enteritidis, B. cereus, and five food spoilage bacteria like P. putida, P. aeroginosa, Alcaligenes faecalis, and Aeromonas hydrophila was evaluated. Both guava and neem extracts have shown higher activity towards Gram-positive bacteria in comparison to Gram-negative bacteria except for P. aeroginosa, V. parahaemolyticus, and A. hydrophila. Hence this study revealed that guava and neem extracts have compounds comprising of antibacterial properties and can be potentially used to control foodborne pathogens and food spoilage microorganisms [9].

The neem has gained increasing interest due to the isolation of natural ingredients with antifungal activity, one of them is terpenoids which have revealed to produce either fungistatic or fungicidal activity on various pathogenic fungi. Govindachari et al evaluated the hexane extract of neem leaf on spore germination inhibition of Colletotrichum lindemuthianum and Fusarium oxysporum against commercial fungicide Mancozeb and found that some fractions of the neem leaf extract were as effective as Mancozeb. They attributed this effect to the presence of the compound 10-undecyn-1-ol in these fractions [11].

Similarly, Song et al reported that many triterpenoids have antifungal activity against Colletotrichum gloeosporioides, in particular one compound with a 27 carbon chain and carboxylic groups [12].

The efficacy of various extracts of neem leaf was evaluated against seed-borne fungi Rhizopus and Aspergillus and results confirmed that the growth of both the fungal species was significantly inhibited and controlled with both alcoholic and aqueous extract. Furthermore, the alcoholic extract of neem leaves was more effective in comparison to the aqueous extract for inhibiting the growth of both fungal species. Another finding demonstrated the antimicrobial role of aqueous extracts of neem cake in the inhibition of spore germination towards three sporulating fungi such as H. pennisetti, C. lunata and C. gloeosporioides [13].

In another study, Mahmoud et al evaluated the effect of aqueous, ethanolic, and ethyl acetate extracts from neem leaves on the growth of selected human pathogens included four Aspergillus species (A. flavus, A. fumigatus, A. niger, A. terreus) which are known to cause aspergilloses, in addition to Microsporum gypseum (a dermatophyte) and Candida albicans, the causal agent of dermatophytosis and candidiases.  The organic extracts (in ethanol and ethyl acetate) exhibited higher antifungal activity in comparison to the aqueous ones.  The 20% ethyl acetate extract exhibited a higher inhibition in comparison to the same concentration of the other extracts. This antifungal activity has attributed to the presence of the main component nimonol.

Lyer and Williamson attributed antifungal properties of neem leaf extract to the inhibition in protease activity of dermatophytes. Cell surface hydrophobicity (CSH) of Candida species increases virulence via promoting adhesion to the host tissues. The changes in hydrophobicity of candidal cells throughout assays in yeast adhesion is the main cause for inhibition of the growth of dermatophytes. Later on, this anti-adhesive mechanism was confirmed by De Rezende Ramos et al. who explored the effect of neem leaf extracts on the cell surface hydrophobicity and biofilm formation, which affect colonization by C. albicans [15,16].

The efficacy of neem leaves against the pox virus is intensely believed.  Chickenpox, smallpox, and warts have been treated with neem leaves by rubbing a paste directly to the infected skin since ancient times. The neem leaf extract effectively absorbed the virus and prevent them from entering the uninfected cells. The aqueous extract of neem leaves has also shown moderate inhibition of viral DNA polymerase of the hepatitis B virus. Neem leaves also work effectively against a fungus called Malassezia, the main cause of dandruff. The gigantic healing properties of neem have also earned the name of the scalp savior too [17].

The methanolic extract of neem leaves (NCL-11) inhibited in vitro plaque formation in 6 antigenic types of Coxsackie virus B-4 at a concentration of 1000 µg/mL. Furthermore, yield reduction, virus inactivation, and effect of time of addition assays suggested that NCL-11 was most effective as a virucidal agent against Coxsackie virus B-4 besides interfering at an early stage of its replicative cycle. The trypan blue dye exclusion test confirmed that the MIC concentrations of NCL-11 were not toxic to Vero (African green monkey kidney) cells; subtoxic concentration was 8 mg/mL, and cytotoxic concentration 10 mg /mL [18].

Parida et al evaluated the in vitro and in vivo inhibitory potential of pure neem compound (Azadirachtin) and crude aqueous extract of neem leaves on the replication of Dengue virus type-2. The aqueous extract of neem leaves was evaluated for in vitro antiviral activity in C6/36 (cloned cells of larvae of Aedes albopictus) cells by employing virus inhibition assay and has shown inhibition in a dose-dependent manner. The neem leaves aqueous extract completely inhibited 100-10,000 TCID50 (Median tissue culture infectious dose) of the virus at its maximum non-toxic concentration of 1.897 mg/mL as indicated by the absence of cytopathic effects. The in vivo protection studies with extract of neem leaves resulted in the inhibition of the virus replication at its maximum non-toxic concentrations 120-130 mg/mL as established by the disappearance of clinical symptoms related to Dengue in suckling mice and the absence of virus-specific 511 bp amplicon in RT-PCR. The pure ingredient i.e. Azadirachtin did not affect the Dengue virus type-2 replication both in vitro and in vivo systems [19].

Neem leaves are loaded with various health and skin benefits. The consumption of neem leaves in the form of a paste, in tea, or just chewing a freshly plucked twig has reaped numerous benefits for people since ancient times.

The paste of turmeric and neem leaves can be used for the treatment of itching, eczema, insect bites, ringworms, and some mild skin diseases. Neem due to its high levels of antioxidants protects the scalp from oxidative stress instigated by the free radicals hence prove beneficial for hair too.  Neem leaves also promote healthy cell division and improve hair follicle growth around the scalp region.

Neem leaves also very effective in strengthening the immune system by preventing the damage caused by free radicals, thus lower down the risk of several diseases extending from common flu to heart disease or cancer.

Chewing of neem leaves also has multiple oral and dental benefits. Neem leaves being antibacterial hence fights germs and sustains the alkaline level of the saliva. It is also effective against plaque formation and gum infections (gingivitis).

Neem has been used in the treatment of malaria traditionally for centuries. Chewing a couple of leaves daily diminishes the possibility of contracting malaria.  The ethanol extract of neem leaves is also effective against chloroquine-sensitive and chloroquine-resistant strains of the malaria parasite.

In large doses or for long periods, it might harm the liver and kidneys.

Serious side effects such as diarrhea, vomiting, drowsiness, blood disorders, loss of consciousness, seizures, coma, brain disorders, and even death can occur in infants within hours after taking neem oil.

Neem oil is likely unsafe and can cause miscarriage when taken by mouth during pregnancy [23].

Every single part of the neem plant is used in traditional medicine. Neem and its ingredients are gaining popularity in the treatment of various microbial infections and other diseases due to increased resistance to current antibiotics and fewer side effects.

The phytoconstituents glycosides, alkaloids, flavonoids, terpenoids, and saponins are the main antibiotic principles present in neem leaves and play a pivotal role in the treatment of several diseases.

Neem leaves possessed good antimicrobial activity against various pathogenic bacteria, fungus, and viruses, confirming the great potential of bioactive compounds and emphasize the rational use of this plant in primary health care. 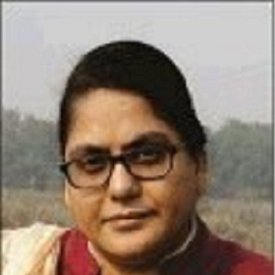 Of particular importance to us, is her multiple experiments performed on Candida albicans and pathogenic bacteria using natural compounds. Because of this experience, we are thrilled to have her on the YeastInfectionAdvisor team.