Is Buckwheat Ok on The Candida Diet?

Buckwheat is a plant that is cultivated for its grain-like seeds. This plant grows rapidly and consists of fragrant flowers that are usually white but can be pink or yellow.

This crop originated in Southeast Asia five or six thousand years ago. From Southeast Asia, it spread to the Middle East, Central Asia, and then Europe. Buckwheat was reported in Finland by 5300 BCE. Studies reported that it was brought to North America in the 1600s. It was grown in America in the colonial days and its production reached a climax in 1866 and at that time this grain was considered as a common livestock feed for the production of flour. [Source] 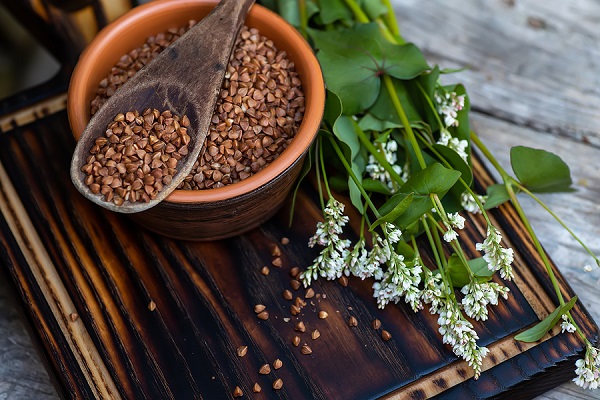 In the mid-1970s buckwheat popularity increased due to the high demand for breakfast cereals and buckwheat noodles to export to Japan, due to its high nutritional value. [Source]

To date, America is known as the 4th largest buckwheat producer. Most buckwheat is harvested in North Dakota, Pennsylvania, and New York. America cultivates about 75,000 acres annually. The U.S produces buckwheat for the Japanese market and exports to them. In 2013, 96% of buckwheat imported to Japan came from America. [Source]

Carbohydrates are the main dietary components of buckwheat. Proteins, fats, fibers, vitamins, minerals, and antioxidants are also present in buckwheat. From the nutritional aspect, buckwheat has a higher nutritional value as compared to other grains.

Carbs are the main component of buckwheat and makeup 20% of the boiled groats by weight. They present in the form of starch, and is the main form of carbohydrates in the plant. Buckwheat has a medium glycemic index rating of 55 and a load rating of 10.7. Glycemic index and load is defined as a measure of how rapidly a meal raises the blood glucose level after its intake. At 55 and 10.7 consuming a typical ½ cup serving should not cause unhealthy spikes in the blood sugar levels although it may rise some.

Studies reported that Fagopyritol and D-chiro-inositols are soluble carbs found in buckwheat and have an ability to moderately raise blood sugar level after meals.

Fibers are good for colon health and buckwheat contains a sufficient amount of fibers. Fibers are composed of lignin and cellulose and makeup 2.7% of boiled buckwheat groats which is concentrated in the husk. To give a unique flavor to buckwheat, the husk is placed in dark buckwheat flour.

Buckwheat consists of a small portion of protein. The protein is about 3.4% of boiled buckwheat groats by weight. Buckwheat is rich in lysine and arginine amino acids, and due to its balanced amino acid profile, the proteins in the buckwheat are of high quality.

However, studies have suggested that the digestibility of these proteins is low due to the presence of anti-nutrients such as tannins and protease inhibitors. Buckwheat protein does have potential benefits in suppressing gall stone formation, lowering blood cholesterol, and decreasing the risk of colon cancer in animals.

Buckwheat is suitable for people with gluten intolerance due to its gluten-free nature.

Buckwheat is low in fat content. Studies reported that half a cup of roasted buckwheat groats contains 1.04g of fat. [Source]

Buckwheat is richer in minerals and not particularly rich in vitamins. The most commonly found minerals and vitamins in buckwheat are:

Manganese: It is responsible for healthy metabolism, development, and growth, and have antioxidant properties.

Iron: Buckwheat is enriched in iron and a deficiency causes iron-deficiency anemia.

Phosphorus: This mineral is essential for the maintenance of body tissues and is responsible for growth and development.

Vitamin B-9 (folate): Buckwheat contains folate which is responsible for the formation of RBCs and WBCs in the bone marrow.

Antioxidants in the Buckwheat:

Following are some of the important buckwheat plant compounds that have antioxidant properties:

Rutin: Is a polyphenol and may lower the risk of cancer and improve inflammation. It also helps in the improvement of blood lipid profile and blood pressure.

Quercetin: Is a popular antioxidant found in many plants and helps in the lowering of cancer and heart disease.

Vitexin: Previous animal studies reported that vitexin antioxidants have a large number of health benefits but the excessive intake of this antioxidant may lead to an enlarged thyroid.

D-chiro-inositol: This is the richest compound found in the buckwheat and is a unique soluble carbohydrate. It decreases the blood sugar levels and helps in diabetes management.

Buckwheat consists of many compounds such as magnesium, rutin, fiber, copper, and certain proteins that improve heart health. Rutin prevents the formation of blood clots, reduces inflammation and blood pressure, which helps decrease the risk of heart disease.

Studies reported that some proteins in buckwheat bind to the cholesterol in our digestive system and prevents its absorption into the bloodstream. As a result blood-lipid profile improves, increases the HDL (good cholesterol), and lowers the LDL (bad cholesterol).

High blood sugar levels may lead to type-2 diabetes. Buckwheat has a low to medium glycemic index due to the high amount of fiber that’s why it is considered safe to eat for people with type-2 diabetes. In a scientific study, it is reported that buckwheat consists of D-chiro-inositol, which is a soluble carbohydrate that make cells more sensitive to insulin and this causes efficient absorption of glucose and reduces blood sugar levels.

Buckwheat consists of a sufficient amount of fiber and supports the intestines in the efficient digestion and absorption of food. Studies suggest that one cup of buckwheat contains 1.58mg of niacin known as vitamin B-3. Vitamin B-3 or niacin is helpful in the conversion of carbohydrates, proteins, and fats into energy for the body, that’s why buckwheat is considered good for efficient digestion.

Buckwheat allergy is common in those people who consume buckwheat in a larger amounts and often. Symptoms include swelling, skin rashes, and digestive distress. (Source)

Is Buckwheat Ok on The Candida Diet?

The following nutrition information is provided by the USDA for one cup (168g) of roasted buckwheat groats.(Source)

Looking at the above figures a ½ serving of buckwheat groats would come in at 17g of carbs which at any one meal is acceptable.

However, looking at the label on the right, which is from a bag of Arrowhead Mills Buckwheat groats, we see that ¼ cup contains 30g of carbs which is to much to eat all at once.

I do not know why there is such a big difference from the USDA figures to whats on the label of Arrowhead Mills. I also took a look at Bob's Red Mill Buckwheat Groats and they list 34g of carbohydrates per ¼ cup.

On my Candida Diet Good Food page I list Buckwheat as an ok grain based on the USDA nutritional profile of 17g of carbs, but in this case, it would be best to check your product labels before consuming buckwheat.

Its a proven fact that candida yeast consumes simple carbs and sugars for food so there is no sense in feeding something you are trying to get rid of. With that said, most people that think they have Candida yeast in their gut have not tested themselves to be sure. They could be dealing with other issues such as bad bacteria or even allergies to foods. If this is the case for you, I would not eat buckwheat for at least the first two weeks on the diet then go ahead and try a ¼ cup without eating anything else and see what happens. Bad reaction, don't eat it until you can fix your digestive problems.

If you have any questions about buckwheat on the candida diet or about yeast infections in general, please feel free to contact us from the contact page of this website or talk to your doctor.