Are Bananas Ok on The Candida Diet?

Bananas are often found at the breakfast table and a much loved staple of kids’ snacktimes, they are the fruit of a plant from the genus Musa. Bananas are indigenous to Australia and Southeast Asia. They are cultivated in more than 100 countries with tropical climates. Bananas are non-seasonal and can be harvested throughout the year. The most popular banana eaten in Western countries is the Cavendish banana. Uncommonly sold prior to the 1950s, the Cavendish banana became widely exported after the former worldwide favorite Gros Michel was deemed commercially unviable. This change was caused by the proliferation of Panama disease, a fungal infection which affected the roots of Gros Michel banana plants. Cavendish bananas are not affected by Panama disease. However, Cavendish bananas lack genetic diversity and are therefore also susceptible to future emergent diseases. While most bananas are eaten when yellow and ripe, they can also be consumed green if cooked. Many cultures around the world consume green bananas.

The first domesticated banana was Musa acuminata banksii. This cultivar was domesticated around 10,000 years ago on the island nation of New Guinea. Musa acuminata banksii was carried by tides to other nearby islands where it reproduced with local species to form triploid bananas. These bananas, which have three sets of chromosomes, are the ancestors of the bananas consumed today. Bananas soon became a staple in the diet of local peoples and were eventually spread over Oceania, South Asia, and Eastern Africa via trade routes. Bananas were found in the Middle East by the 5th century and made their way to the Americas by the 16th century. In both the United States and Europe, bananas were available but prohibitively expensive to the average consumer in the mid-1800s. Large scale banana plantations focused on export grew in prominence around this time. These plantations gave rise to the multinational banana brands we know today. The banana trade quickly profited in the export oriented and low tax economies of the Central and South American countries which grew most bananas destined for American consumption. 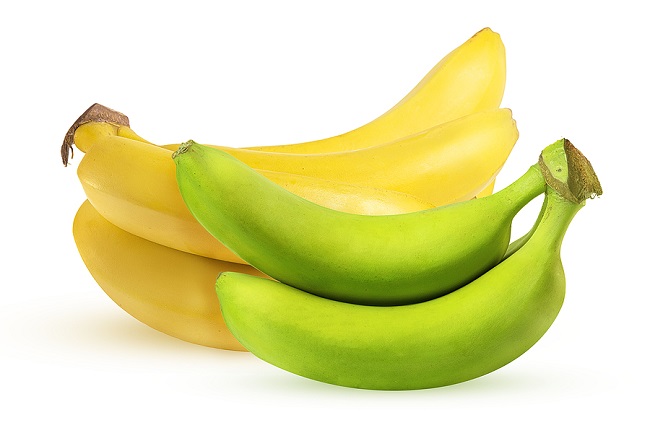 Numerous health benefits are associated with bananas. These benefits can come from whole ripe banana fruit, extracts made from the peels of ripe bananas, and flour made from green bananas. Ripe banana fruit contains a variety of bioactive compounds. These include antioxidant compounds, biogenic amines, carotenoids, and phytosterols (1).

Many Types of Antioxidants

Bioactive compounds are valuable in protecting the body from oxidative stress and have antioxidant activities. Biogenic amines in bananas include serotonin, norepinephrine, and dopamine (2). These neurotransmitters influence mood and the feelings of well being and happiness.

Phytosterols are compounds which are structurally similar to cholesterol and therefore vie with cholesterol for gut absorption (3). A diet rich in phytosterols can help lower LDL cholesterol. Phenolic compounds identified in banana fruit include anthocyanins, gallic acid, tannins, catechin, and epicatechin (2).

While not present at significant levels in Cavendish bananas, some banana cultivars have high levels of carotenoids which convey provitamin A activity (4). Vitamin A deficiency is a serious health concern in many developing countries. The consumption of bananas high in this vitamin could help alleviate Vitamin A deficiency in impoverished populations.

While it commonly ends up as a waste product (5), the peel of ripe yellow bananas contains high levels of phenolic compounds. Banana peel extracts have high antioxidant activities due to their phenolic content (6) as well as antimicrobial activity (7). Banana peels contain high amounts of dopamine and l-dopa, which could potentially be extracted and utilized in treating Parkinson’s disease (8).

Green bananas also convey numerous health benefits. These include gastrointestinal benefits, reduction in renal and kidney issues associated with diabetes, and weight maintenance or weight loss (9). Green bananas can be converted into green banana flour. Banana flour is high in resistant starch, which is fermented by the large intestine and can confer health benefits (10). Banana flour also contains flavonoids including epicatechin (11) which can help prevent cardiovascular disease and Type 2 diabetes.

Bananas have long held ethnopharmacological relevance and are utilized by many cultures to treat ailments as well as reduce chronic disease risk (1). Consumption of banana peel flour is associated with lessened depression symptoms when used in traditional medicine (8). Sampath Kumar et al (12) outline many ethnopharmacological uses for banana. Banana flowers have been used to treat ulcers and bronchitis. The sap can be used to treat fever, dysentery, and insect bites.

Bananas have a mild laxative effect and can be utilized to treat constipation. Bananas contain fructooligosaccharides which act as probiotics feeding the bacteria in the gut. Eating bananas can give an energy boost. They have also been used as a natural remedy for hangover and as a natural antacid to prevent heartburn. Banana peels can be applied topically to remove warts.

Almost no adverse health effects are known for bananas. In very rare cases, individuals can be allergic or intolerant to bananas.

Bananas and The Candida Diet

The following nutrition information is provided by the USDA for one medium banana (118 g).

A ripe banana has a glycemic load of 51 to 56 based on the ripeness, the riper it is the higher the sugar content and therefore the glycemic index. With a glycemic index of 51 and 27g of carbs you would get a glycemic load of 14, which falls in the medium range. If the banana ripens to the point it is developing brown spots the starches will be 90% sugar and should be avoided while on the Candida diet. They should also be avoided if you have Type 2 Diabetes.

What About Green Bananas?

Green bananas are an entirely different story. A green banana will typically have a glycemic index of 41 because of higher levels of fiber from resistant starch. The higher fiber level results in less sugar, about 59% or about 9g, which increases as a banana ripens. The fiber also helps to bind the sugars so they are absorbed into the blood stream slower than a ripe banana. The reduced sugar will not spike blood sugar levels if you are a diabetic so green bananas are ok to eat.

Resistant starch feeds good bacteria in the gut but won't feed Candida yeasts. The resulting rise in bacteria levels will help you displace Candida from your gut if it is present.

We believe that green bananas are fine to eat occasionally on the Candida diet. However, because of the resistant starch feeding bacteria, they could cause bloating if bad bacteria is present. Get that under control and a green banana is your friend.

If you have any questions about anything pertaining to Candida yeast infections, please feel free to contact us from the contact page of this website or talk to your doctor.