Are Red or Green Apples Ok on The Candida Diet?

A lunchbox favorite, apples (Malus domestica) are the fruit of the apple tree. They were first grown in Central Asia, and their wild ancestor Malus sieversii still grows there to this day. Apples were domesticated approximately 5000 years ago. They have been cultivated in both Asia and Europe for thousands of years. Apples traveled to these locations via the Silk Road. When apples arrived in Europe, they were crossbred with native crabapples. There are still apple cultivars in Europe today which are more related to crabapples than Malus sieversii for this reason. Early American settlers brought apple seeds with them when they crossed the Atlantic. The first apple orchard in America was located in Massachusetts in the early 1600s. 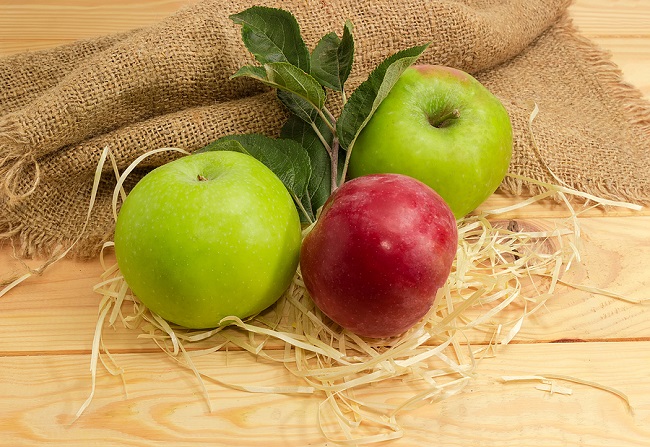 The size of mature apple trees is dependent on how the tree was planted. Apple trees grown from seeds are large, so most commercially grown apples are propagated by grafting onto rootstock, which yields a tree of a more manageable size. Wild apple trees can be up to 30 feet tall, whereas most cultivated apple trees are about 10 feet tall. There are over 7000 kinds of apples, and most apple trees can produce 200 pounds of fruit per year once they reach maturity. The worldwide production of apples is approximately 85 million metric tons, with 45% of apples coming from China. China is also the largest exporter of apples, and is responsible for 18% of global exports. The largest producer of apples within the United States is Washington State; apples are the largest product of the state’s economy. Commercial apples are stored in high carbon dioxide environments with lots of air flow to ensure ethylene doesn’t build up. Ethylene is the compound which ripens fruit, including apples.

Apples have significance in many cultures and myths. In Norse mythology, apples were given to the gods for eternal youthfulness. They are also a symbol of fertility in Norse myths. In Ancient Greece apples were thrown at a potential love interest—the love interest caught the apple if they were interested in you as well. The apple is also an important part of Christian tradition with the story of Adam and Eve. One confounding issue with the historical significance of the apple is that many different fruits were translated to apple. Thus, not all of the myths and traditions may actually be referring to the fruit we now call an apple.

One medium apple (200 grams) contains 105 calories. Apples are a good source of Vitamin C and a significant source of carbohydrates and fiber.

One large apple contains 28 grams of carbohydrates, including 21 grams of sugar. In spite of its sugar content, apples are considered a low glycemic food with a glycemic index of 38.

Apples are not a significant source of protein, with 0.5 grams of protein per serving.

Apples are not a significant source of fat, with 0.5 grams of fat per serving.

Apples are a good source of Vitamin C, with 10% of the FDA recommended daily value in each serving. Apples are not a significant source of any minerals.

Apples have the highest antioxidant concentration among the most commonly consumed fruits in the United States (1). Apples contain more antioxidants than oranges, grapes, strawberries, and bananas (1). The antioxidants in apples are largely not bound to other compounds, making them more available to the body compared to the antioxidants in other fruits (2). The presence of significant quantities of quercetin in apples gives apples the majority of its health benefits, which will be discussed in detail below.

Consumption of apples is beneficial in reducing cardiovascular risks. One study found that women who consumed the greatest amount of apples had a 20% reduction in cardiovascular issues (6). Another study showed that apple and onion intake was associated with decreased risk of coronary mortality and stroke (7).

There are very limited negative health effects of apples. Although uncommon, some individuals can be allergic to apples. Most allergic individuals are of European ancestry. The main allergic reaction is called oral allergy syndrome. This mild allergic reaction generally involves itching and swelling in the mouth but no anaphylaxis or other life threatening symptoms. The protein responsible for oral allergy syndrome is deactivated by heating, so only raw apples elicit the allergic response. An even less common but more severe allergy is known mainly amongst individuals of Mediterranean descent. This allergy is to both raw and cooked apples and can be life threatening.

Apple seeds contain minute amounts of cyanide. Even if apples seeds are accidentally consumed, cyanide poisoning is not possible as a very large number of seeds would need to be eaten to cause cyanide poisoning or death.

Apples on The Candida Diet

This nutrition information is provided by the USDA for one medium-sized (182g) apple (3” in diameter).1﻿

What About Red vs Green Apples?

The question though is can you eat apples on the Candida diet? Because apples have a low glycemic index, ample fiber that helps prevent constipation, promotes bowel movements while feeding your good bacteria, a couple apples a week are probably not going to hurt you. The natural sugars should not be an issue and cause blood sugar spikes, if they did the glycemic load of an apple would be much higher.

If however, apples give you a problem, especially bloating, and you have not tested yourself to see if you do have a Candida yeast infection in your gut, because apple fiber is good food for bacteria, more than likely you have an over growth of bad bacteria.

If they don't cause issues, make sure you add the carb amounts to your daily total and shoot for 50 to 60 grams a day so you can keep your immune system functioning at its best.

If you have any questions about anything concerning foods on the candida diet or about yeast infections in general, please feel free to contact us from the contact page of this website or talk to your doctor.