Is Amaranth Ok on The Candida Diet?

Amaranth is a flowering plant which can be consumed as a grain. Amaranth is not a true grain but a pseudocereal which is prepared and eaten much like a true grain such as wheat. Amaranth leaves are widely consumed as a green vegetable in parts of Asia and Africa. Depending on the context, amaranths are considered a food crop, an ornamental plant, and an invasive weed.

Amaranths tend to grow tall bright red hued flowers in the summer and fall, and are a common garden plant. Amaranth is considered a weed when it grows wild amongst other crops; it is one of the most problematic weeds in North America particularly because it is resistant to many herbicides. 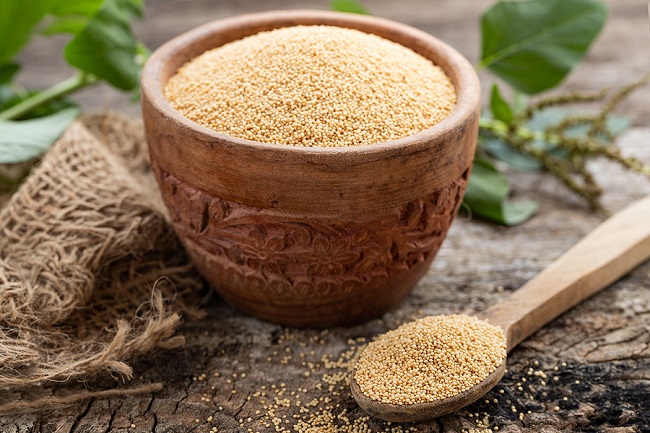 The same qualities which make amaranths weeds make them easy to grow as food crops: they grow pervasively from few seeds, grow quickly, and produce many seeds. The varieties most commonly consumed as foods are Amaranthus cruentus, Amaranthus caudatus, and Amaranthus hypochondriacus. The grains from amaranth plants have been cultivated for consumption for at least 8000 years.

Amaranth is native to Central America and Mexico. It was a large part of the staple diet of the Aztec people prior to Spanish colonization but did not become popular in the US and Europe until the 1970s. Amaranth can be eaten as a grain side dish similar to quinoa, incorporated into baked goods, popped like popcorn, or extruded into a breakfast cereal. It is an important component in alegria, a popular Mexico City sweet snack. Amaranth is not an allergen like many typical grains, and can be consumed by those who are allergic or sensitive to wheat.

One ½ cup serving of amaranth contains 125 calories. It is high in carbohydrates and contains a significant amount of protein. Amaranth is an excellent source of manganese and copper and a good source of magnesium, phosphorus, iron, selenium, and zinc.

Amaranth contains 23 grams of carbohydrates per serving. Amaranth is not a significant source of sugar, containing less than 1 gram per serving. Amaranth has a glycemic index of 107, making it a high glycemic food. Despite this, it may be an acceptable grain source for diabetics in small amounts, although this is debated. Amaranth may be acceptable to diabetics because its protein, fiber, and mineral content make it a healthier choice than refined grains such as white rice or white flour.

Amaranth contains 5 grams of protein per serving. Amaranth is considered a particularly good protein source for a grain-type product because it contains high amounts of methionine and lysine, which are usually limiting amino acids in other grains (1). It is deficient in the essential amino acids threonine and leucine.

Amaranth contains 2 grams of fat per serving. Approximately 50% of the fat in amaranth is polyunsaturated, 30% is monounsaturated, and 20% is saturated. The unsaturated fat content of amaranth is thought to be at least partially responsible for its cholesterol lowering effects (2).

Amaranth is non-allergenic and can be consumed by individuals with Celiac disease or wheat sensitivity. It can be used in baking as a wheat substitute and gives a satisfactory texture as a replacement for allergenic flours (5). While extensive research has been performed on the health benefits of amaranth in animals, very little research has studied the health benefits of amaranth in humans. The information below will detail the positive effects amaranth consumption has in animal models, which may indicate positive outcomes for human health as well.

Amaranth also contains anti-nutritional compounds such as saponins and oxalates. Amaranth should be cooked before eating, as heat destroys these compounds.

Amaranth on The Candida Diet

This nutrition information is provided by the USDA for a half-cup serving (123g) of cooked amaranth with no added fat or salt.

The glycemic index for amaranth runs from 107 to 97 as reported by the University of Sydney, Australia. This would result in a glycemic load of at least 22, which is high and will more than likely cause a blood sugar spike and feed Candida yeast.

However, if you mix amaranth flour with wheat flour in a 50/50 mix you can reduce the glycemic index to 75. If you used 25% amaranth you could reduce it even further to about 65, moderate but basically the same as sugar itself which is 65 to 67.

Wheat however contains gluten which can be hard on the gut, and since most people don't actually test themselves for Candida and could be gluten intolerant, wheat should be avoided.

For these reasons we would not consume amaranth on the Candida diet. If your idea was to use it as a flour you would be much better off with almond, walnut or flax seed flours which have a glycemic index of Zero!

If you have any questions about yeast infections what so ever, please feel free to contact us from the contact page of this website or talk to your doctor.