Almonds on The Candida Diet

A favorite healthy snack of the protein conscious, almonds are the seeds of the tree Prunus amygdalus. Although almonds are commonly referred to as nuts, they are technically the seeds of the almond fruit. Almonds are drupes closely related to other members of the Prunus family such as cherries and plums. However, the exocarp of almonds is leathery and thick rather than fleshy and juicy and is thus not commonly eaten. Almonds originated in Iran and the surrounding regions but can be grown anywhere with a Mediterranean climate. Almond trees need dry warm summers and approximately 500 hours below 45°F to break dormancy. They begin to produce good yields of fruit three years after planting, and are fully mature six years after planting. Almonds grow readily from seeds and are likely one of the first domesticated fruit trees for this reason. 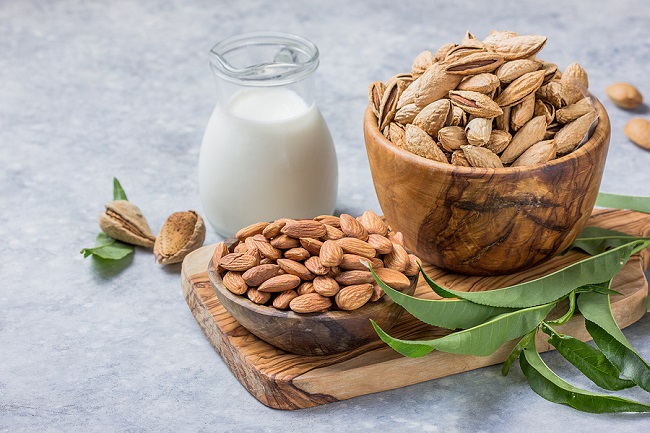 The United States accounts for 60% of the world’s almond production and grows approximately 1.9 million metric tons of almonds with shell each year. This includes about $3 billion worth of almond exports. Nearly all US almonds are grown in California. Pollination of California almond trees is a major event, with over 1 million behives transported to California from across the US every February. This transport involves over half of all beehives in the United States. Due to the threat to the honeybee population from colony collapse disorder, there is great interest in creating almond tree varieties which can self pollinate without the help of bees. A few self pollinating varieties already exist, but they tend to yield almonds which are smaller than the conventional honeybee pollinated varieties. Sustainability is also an important area for California almond growers. Producing one almond requires more than 1 gallon of water, which is especially problematic due to the consistent droughts in California.

Almonds are used in various culinary preparations around the world. They can be eaten both raw and roasted and can be made into almond milk, a dairy free milk replacement. Almond flour is the base of many popular French confections including macarons, financiers, and dacquoise. Almond paste is used in many Middle Eastern and Indian desserts. Traditional Easter cakes or breads from peoples across the globe are also made with almonds. Ground almonds form the base of marzipan, which is used in many desserts throughout the world but particularly in Western and Southern Europe.

Numerous positive health effects are associated with almonds. They contain significant quantities of polyphenols including flavonoids, proanthocyanidins, and tannins (1). The skin of almonds is particularly rich in polyphenols, and could be used or create extracts with high antioxidant activity, anti-inflammatory effects, and anti-viral activity (1). The anti-inflammatory effect of consuming almonds may be due to their high monounsatured fatty acid content as well as their magnesium content (2). Almond polyphenols are highly bioavailabile to the body after consumption (3).

Good for Diabetics, The Heart and Brain

Consumption of almonds also aids in weight maintenance and glucose regulation. Thus, almond consumption may have beneficial effects for individuals with Type 2 diabetes or metabolic syndrome (5). Almond consumption is associated with a lowered risk for cardiovascular disease (3). They may be preventive agents against brain atrophy and memory loss (6). Almonds provide phytochemicals, micronutrients, and macronutrients which can affect the pathogenesis of Alzheimer’s disease. These include oxidative stress, cholingergic pathways, amyloidogenesis, and tau phosphorylation (6).


Almond Oil is Good For The Skin

Almond oil is used in traditional medicine for skincare related purposes (7). It is mainly utilized topically. Some of the purported benefits of almond oil are a reduction in post-operative scarring, improved skin tone, and skin rejuvenation. Studies have also shown wrinkle severity is significantly decreased when whole almonds were consumed as 20% of participants’ calorie intake (8).

A popular preparation of almonds is in almond milk. Almond milk does not lose its vitamins, minerals, or antioxidants during processing and pasteurization (9). It is usually fortified with calcium and is lower in calories than cow milk. Almond milk is considered a suitable replacement for cow milk, especially for individuals who are allergic or intolerant to traditional milk. Commercial almond milks provide enough Vitamin E and Vitamin A to be considered a good source of each (9).

There are several possible negative health effects of almonds. As mentioned previously, bitter almond varieties contain cyanide and should not be consumed. Bitter almond extracts are suitable for consumption because the cyanide has been removed. Almonds, as well as other tree nuts, are one of the major allergens. Approximately 1% of the world’s population is allergic to tree nuts (10).

Almonds are also susceptible to contamination by molds which produce alfatoxin, a poisonous carcinogen. Commercially produced almonds are tested for aflatoxins before sale, but it is unsafe to eat a mold covered almond if one should happen to come across it.

It is also prudent to note that while almonds are healthy in reasonable doses (1-2 oz per day), they are high in calories and may be heavily salted so almonds should be consumed in moderation.

Almonds and The Candida Diet

The following nutrition information is provided by the USDA for 1 ounce (28g) or about 24 whole unsalted almonds.

At 6g of carbs and 1.2g of natural sugar per 24 almonds, almonds make a great snack while on the Candida diet! Almond butter comes in at 3g of carbs and less than 1g of sugar per tbls which is also more than acceptable.

Almond Flour on The Candida Diet

Almond flour has 24g of carbs per cup and could be used in place of wheat flour, which has 86g of carbs per cup in addition to gluten which many people are intolerant to. The glycemic index for almond flour is 0, thats right, Zero! So is walnut and flax seed flours. Wheat on the other hand comes in at 69, for reference a tsp of sugar is 67. Buckwheat, brown rice and tapioca flours are all over 60 on the glycemic index and should be avoided because they will cause blood sugar spikes and feed Candida yeast.

What About Almond Milk on The Candida Diet?

The following nutrition information is provided by the USDA for one cup (240ml) of unsweetened almond milk.1﻿


1g of carbs and No sugar! More than acceptable on the Candida Diet. Sweetened varieties typically contain 7g of sugar added per cup which is not to bad compared to cows milk which typically contains 12g per cup. For comparison a tsp contains 4.2g of sugar. Ideally you should avoid the blatant sugars and eat complex carbs instead so stick with the unsweetened almond milk.

Silk regular Coconut milk contains 5g of added sugar per cup but the unsweetened variety has no sugar and 1g of carbs so it would make a good substitute as well.

If you have any questions about almonds or any other food or yeast infections in general, please feel free to contact us from the contact page of this website or talk to your doctor.