Is Quinoa Ok on The Candida Diet?

A health powerhouse and darling of the grain alternative scene, quinoa (Chenopodium quinoa) is the seed of a plant in the amaranth family. Quinoa is considered a pseudocereal. This is because quinoa comes from a flowering plant rather than a grass but is consumed similarly to true grass cereals such as wheat, rice, and corn. Quinoa originated in the Andean region of South America and has been consumed by humans for at least three thousand years. Most quinoa is still grown on small farms in the Andes. Quinoa has gained popularity in the US and Europe in the last two decades. This increase in popularity has led to the crop price of quinoa more than tripling over a few years. The crop price increase has affected local Andean consumers of quinoa, some of whom may now be unable to purchase quinoa due to its high cost. This has caused concerns regarding food security for traditional consumers of quinoa (1). 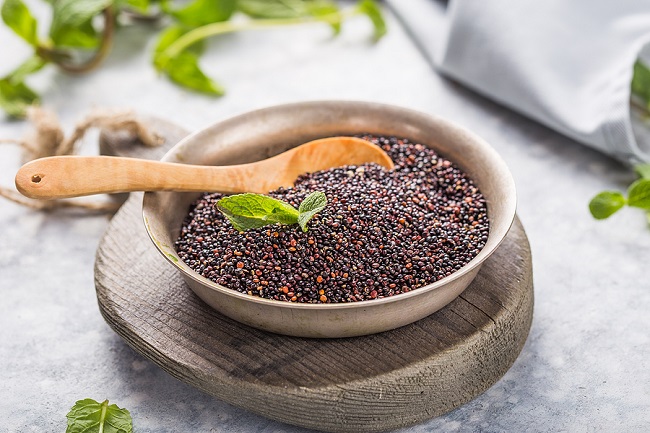 Quinoa can grow readily in a multitude of conditions. It can be cultivated at altitudes from sea level to more than 10,000 feet and can withstand temperatures from 25-95°F. Quinoa is normally hand harvested. The vast majority of quinoa is produced in Peru and Bolivia. Together they account for 99% of global quinoa production, growing approximately 160,000 metric tons each year. Quinoa is also grown commercially in the United States, Kenya, and India. Quinoa comes in three main varieties: White, red, and black. White is the variety most commonly found in the US, with red also widely available. White quinoa is the most versatile, as it is light, fluffy, and fairly neutral tasting. Red quinoa is crunchier and has a nuttier flavor than white quinoa. Black quinoa is similar in texture to red quinoa but with an earthier flavor. Quinoa can be used as a substitute for rice, can be added to salads, and can even be used as an ingredient in baked goods.

One serving (1/2 cup) of cooked quinoa is 100 calories. It is a significant source of complex carbohydrates, protein, and the minerals magnesium, copper, and phosphorus. With a glycemic index of 53, quinoa is considered in the middle of “good” and “bad” carbohydrates. However, the protein content of quinoa is higher than many other grains. Protein makes you feel full for longer, making quinoa a relatively healthy choice amongst grains.

One serving of quinoa contains 18 grams of carbohydrates. The most prevalent carbohydrate in quinoa is starch; it contains very little sugar with less than 1 gram per serving.

One serving of quinoa contains 2.5 grams of fiber. The fiber in quinoa is largely insoluble fiber. Insoluble fiber can be helpful in preventing constipation and promotes regular bowel movements.

Quinoa is not a significant source of fat, with each serving containing 1.5 grams.

Several compounds with high antioxidant activity have been isolated from quinoa. Phenolic compounds include ferulic acid, caffeic acid, and p-coumaric acid (3) as well as vanillic acid (4). Ferulic and caffeic acids showed benefits against diseases related to oxidative stress, including diabetes and cancer (5). P-coumaric acid was shown to decrease low density lipoprotein cholesterol (LDL-C or “bad” cholesterol) levels (6). The major flavonoids contained in quinoa are quercetin and rutin (4). Quercetin has anticancer, antiviral, and anti-inflammatory properties (7). Rutin can reinforce blood vessel walls and improve circulation (8). The antioxidant activity of quinoa is higher than other cereals including buckwheat and rice (3). The hull of quinoa is rich in antioxidant compounds, but it is typically removed before sale due to the presence of bitter saponins. This results in a loss of about 30% of the potential antioxidants available in quinoa (4).

The main health benefits of quinoa are associated with its potential to lower cholesterol. Quinoa contains relatively high levels phytosterols, particularly B-sitosterol (9). Phytosterols are structurally similar to cholesterol, and may lower cholesterol by competing with it for absorption (10). The phytosterol content in quinoa is significantly higher than that of corn, barley, millet, and rye (11). Several clinical studies showed that daily consumption of quinoa for thirty days lowered LDL-C, triglyceride, and total cholesterol levels (12).

Quinoa may also have effects against obesity and diabetes. Most of these effects have only been seen in mice and rats and have not yet been proven in humans. The inclusion of quinoa in a high sugar diet in mice reduced the negative effects that sugar had on glucose level and lipid profile (13). These effects may mean quinoa could have positive benefits for diabetics. Several studies demonstrated that when obese rats were given quinoa extracts they had lowered blood glucose levels, less fat in their body tissues, and greater insulin sensitivity compared to rats not given quinoa (12). One human study with pre-diabetic individuals demonstrated that people who consumed quinoa daily showed decreases in hemoglobin A1C levels and body mass index (BMI) while also showing increased levels of fullness and satiation after eating compared to individuals who did not consume quinoa (14).

Quinoa contains phytic acid, which is an antinutritional compound. Phytic acid can bind to minerals and make them unavailable for use by the body. Quinoa naturally contains high amounts of saponins, a detergent which can make quinoa taste soapy and bitter. However, most quinoa is pretreated before sale to remove saponins. They can also be removed at home by rinsing quinoa in water before cooking.

Quinoa on The Candida Diet

The following nutrition information is provided by the USDA for 1 cup (185g) of cooked quinoa with no added salt or fat.

Eating one cup of quinoa with 39g of carbs at one time is a little excessive. However, looking at the label on the right, and as mentioned above, a half cup contains 19g of carbs with 1g being added sugar. If you were having this at one meal with some green veggies and a meat, this would be more than acceptable.

The carbohydrates found in quinoa are also a complex carb which are broken down and absorbed slower than a simple carb. Complex carbs allow you to avoid a blood sugar spike.

You can't cut off all carbs on the Candida diet because the red and white blood cells need some daily carbs to function correctly. White blood cells are part of your immune system and you want them functioning at their best to aid in your Candida yeast cleansing efforts. We recommend 50 to 60 grams of carbs per day from good sources such as quinoa.

If you have any questions about quinoa or Candida yeast infections in general, please feel free to contact us using the contact page of this website or talk to your doctor.