Is Kombucha Ok on The Candida Diet?

Kombucha is a sweetened, fermented, probiotic product made with black or green tea. A bacterial and yeast colony is added known as SCOBY, “symbiotic colony of bacteria and yeast” during its production. It is considered a non-alcoholic beverage and offers an excellent variety of health benefits. The production of kombucha tea can vary, but generally, it is produced by a double fermentation process. (1)

The origin of Kombucha is uncertain, but studies reported that it originated in northeast China around 220 B.C. and then spread with tea along the Silk Road. It is brewed in different parts of Eastern Europe, especially in Russia. It is commonly used in Japan, Korea, and China. During the times of the HIV/AIDS pandemic, Kombucha gained popularity in the United States in the late 1980s because it findings suggested that it boosts the immune system. In the late 1990s, it gained importance in the domestic market due to its healing properties. (1).

With a better understanding and greater awareness of fermented foods and their health benefits, Kombucha is considered a health product in the 21st century and readily available in different countries as a beverage. (1, 2). 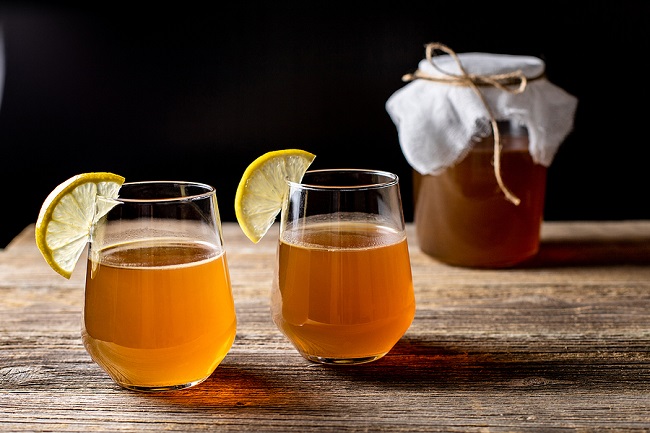 A 6-ounce kombucha is serving consists of 3 grams of carbs, 5mg of sodium, and 3 grams of sugar. This tea is low in calories and fat-free. Kombucha tea also consists of lactic acid, acetic acid, and beneficial bacteria. This tea is made from the leaves of Camellia sinensis, and it contains a high amount of antioxidants. It also contains vitamins including thiamine, niacin and vitamin C. Due to the result of the fermentation process; it also contains traces of alcohol. (3)

Kombucha does not have any protein and fat content, and it also does not provide any fiber. It is reported that it contains 0 grams of proteins, fats, and fiber.

Kombucha consists of small amounts of vitamins and minerals. Thiamine, niacin and vitamin C, and sodium are present in this tea. In a 100 gram of serving, 4mg of sodium is present in Kombucha. (5)

Probiotics are beneficial bacteria that are responsible for healthy gut. The lactic acid bacteria present in Kombucha make it a probiotic product. (6)

Antioxidants are substances that protect the human body from oxidative stress and damage caused by free radicals. Green tea contains a sufficient amount of polyphenols; these molecules are potent antioxidants and fight against free radicals. When made with green tea, Kombucha offers a great benefit of antioxidant potential and has a significant impact on human health. In addition, vitamin C also present in Kombucha also serves as an antioxidant and eradicates free radicals. (8)

Antioxidants are essential molecules that fight against free radicals. Kombucha contains a sufficient amount of antioxidants that help the body to overcome free radicals. (9) When made with green tea, Kombucha shows highly antioxidant potential for the liver and reduces liver toxicity. (10) Kombucha also helps improve good “HDL cholesterol” that helps in the proper functioning of the heart. When Kombucha is made from green tea, it helps reduce LDL cholesterol and protects it from oxidation, which otherwise may cause heart disease. Studies show that green tea consumers have a 31% lower risk of developing heart disease; hence this benefit applies to Kombucha when made in combination with green tea. (11)

Furthermore, Kombucha slows down the digestion of carbohydrates which helps in the reduction of blood glucose levels. It also improves kidney function. Studies reported that Kombucha made from green tea significantly reduces the risk of developing type-2 diabetes. (12)

Scientific studies show that Kombucha helps prevent and grow cancer cells due to its high polyphenols and antioxidants. Polyphenols block the gene mutations and growth of the cancerous cells; moreover, it also promotes cancer cell death. Furthermore, acetic acid is produced during the fermentation process of Kombucha, and this acid can kill microorganisms and have an anti-microbial effect. Kombucha made from green or black tea has strong anti-bacterial properties and kills infection-causing bacteria and Candida yeast. (13)

When Kombucha is made with green tea, it helps burn belly fat and improves cholesterol levels. Studies revealed that Kombucha contains lactic acid bacteria, which serves as a probiotic. Probiotics are beneficial bacteria that help in the improvement of gut health and reduce inflammation. (14)

Some Kombucha is available in low calories, but some Kombucha can have up to 120 calories per bottle, leading to weight gain. (15) Consuming too much Kombucha may lead to bloating and digestive distress due to its carbonated composition. Studies show that Kombucha contains compounds known as FODMAPs; these are particular types of carbs that cause digestive distress. Over consumption of kombucha drinks may cause diarrhea due to their high sugar content. (16)

Kombucha drinks with added sugars increase the risk of obesity, type-2 diabetes, and fatty liver. Furthermore, Kombucha is unpasteurized and consists of different types of bacteria and yeasts that may cause infections in particular people who have weakened immune systems. In contaminated Kombucha, some allergic reactions, liver disease, and acidosis have been reported. Kombucha also contains a trace amount of caffeine and alcohol; hence pregnant women should avoid its use. (17)

Kombucha on The Candida Diet

Although these yeasts can have a positive effect on Candida yeasts some of them, such as Saccharomyces cerevisiae, have been known to cause infections in healthy adults. For that reason, we would not consume Kombucha on the Candida diet.