Is Grapefruit Ok on The Candida Diet?

A sweet, sour, and bitter delight, grapefruit (Citrus x paradisi) is a citrus fruit. Grapefruit is a natural hybrid of the pomelo (Citrus maxima) and common sweet orange (Citrus sinensis). It is native to Barbados and was first identified in the mid 1700s. Like many citrus varieties, grapefruit likely originated via natural hybridization of close by orange and pomelo trees. The sweet orange and pomelo parents of grapefruit are native to Asia and were brought to Barbados in the 1600s. Grapefruit was first brought to the United States in 1823, and was a popular commercial commodity by the early 1900s. 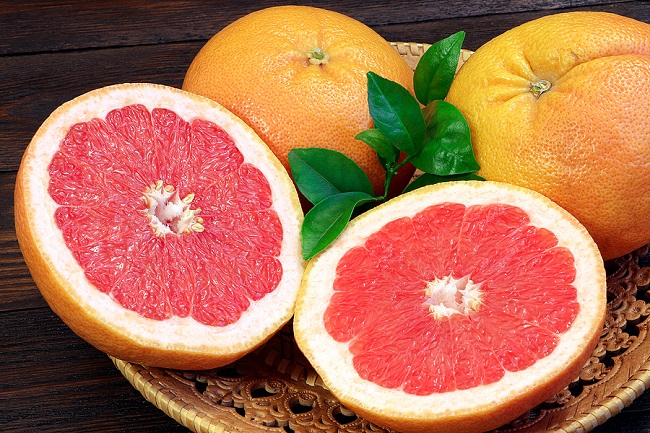 One serving of grapefruit is ½ of a grapefruit, or approximately 154 grams. One serving contains 65 calories and is an excellent source of Vitamin C. Grapefruit is considered a low calorie food.

One serving of grapefruit contains 16 grams of carbohydrates, including 11 grams of sugar. Despite its sugar content, grapefruit is a low glycemic food with a glycemic index of 25.

Grapefruit is not a significant source of protein, containing 1 gram per serving.

Grapefruit is not a source of fat, containing < 0.5 gram per serving.

Three main categories of phenolic antioxidant compounds are present in grapefruit: flavanones, p-hydroxybenzoic acids, and hydroxycinnamic acids (1). The most prominent antioxidants in grapefruit are the flavanones narirutin and naringen (1). Naringen is what gives grapefruit its bitter taste. Some of the other phenolic antioxidants in grapefruit are also important for taste, including the hydroxycinnamic acid ferulic acid. Ferulic acid is a precursor for a compound which produces off flavors in improperly stored grapefruit juice (2). The presence of flavonoids including naringen are the main source of health benefits for grapefruit, and will be discussed in more detail below.

The antioxidant content of grapefruit is the major source of grapefruit health benefits. These benefits come mainly from the flavanoid naringen and the secondary metabolite furanocoumarin. Naringen content is fairly unique to grapefruit, and is not found in high concentration in any other fruit or vegetable. Extensive research studies with mice showed naringen consumption may have positive effects against obesity, high blood pressure, diabetes, liver disease, inflammation, and cardiovascular disease (3).

However, only a limited amount of research has shown the health effects of grapefruit consumption in humans. One such study showed that consumption of one serving of grapefruit per day improved the lipid profile and blood pressure of obese individuals (4). Consuming an amount of naringen equivalent to that found in about 1 L of grapefruit juice could significantly lower total cholesterol as well as low density lipoprotein (LDL) or “bad” cholesterol (5).

Drinking grapefruit juice daily for 7 weeks reduced formations of specific lesions which are often the earliest indication of colorectal cancer (6). This reduction is thought to be due to the antioxidant activity of grapefruit juice, which is mainly due to naringen (7).

Furanocoumarins present in grapefruit also give health benefits. Several studies have suggested that grapefruit consumption would be beneficial in reducing the risk of breast cancer. This is due to the presence of the furanocoumarins bergamottin, which was shown to inhibit breast cancer cell growth (8). Consuming raw grapefruit has been associated with less depression symptoms and a greater positive mood (9). Furanocoumarins can also have negative health effects, which will be discussed below.

Grapefruit can have serious negative health consequences when it interacts with certain drugs. For a few drugs, grapefruit will directly block the absorption of the drug in the small intestine. This will cause the drug to have a lesser effect or no effect for the patient.

For other drugs, furanocoumarins naturally present in grapefruit inhibit an enzyme responsible for metabolizing many drugs. The concentration of this metabolizing enzyme was shown to decrease by up to 47% four hours after grapefruit was eaten (10), and a deficit in the enzyme can last for up to three days (11). When this enzyme is inhibited, a drug may not be fully metabolized. This can lead to the level of the drug becoming too high in the bloodstream, which can cause adverse health effects.

Individuals have different concentrations of the metabolic enzyme grapefruit inhibits in their intestines. This means people can have very different and possibly unpredictable grapefruit drug interactions (12). Grapefruit is only known to interact with drugs taken orally, and does not have an effect on intravenously administered drugs (10).

Even one glass of grapefruit juice or one half of a fresh grapefruit is enough to cause adverse health effects. Some of the drug classes known to have interactions with grapefruit are statins, immunosuppressants, antiarrhythmics, protease inhibitors, and calcium channel blockers (13). It is advisable to consult with a doctor about the suitability of consuming grapefruit if taking any medications.

Grapefruit on The Candida Diet

The following nutrition information is provided by the USDA for one half of a raw, medium, pink or red grapefruit (123g) measuring approximately 3 3/4" in diameter.﻿

Because of the low glycemic index and a glycemic load of 3, grapefruit is ok occasionally on the Candida Diet. Grapefruit may also have anti-candida effects based on the studies concerning grapefruit seed extract. It won't have as much as the extract but it will have some.

If you have any questions about grapefruit and the Candida Diet or any other questions about yeast infections, please feel free to contact us from the contact page of this website or talk to your doctor.