Is Coconut Milk Ok on The Candida Diet?

Coconut milk is a liquid obtained from the grated coconut and it is often very thick and creamy or thinner and more milk-like. It’s been one of the most significant ingredients in South Asia, Southeast Asia, the Caribbean, and northern South America for hundreds of years and even millennia in some places, like India. It is considered a staple ingredient in many traditional dishes and beverages and is usually used for ceremonial offerings. Of all the plant kinds of milk, coconut has the longest tradition of use. In many countries where it's a staple, people simply don't consume cow’s milk so coconut milk is ‘the milk’. 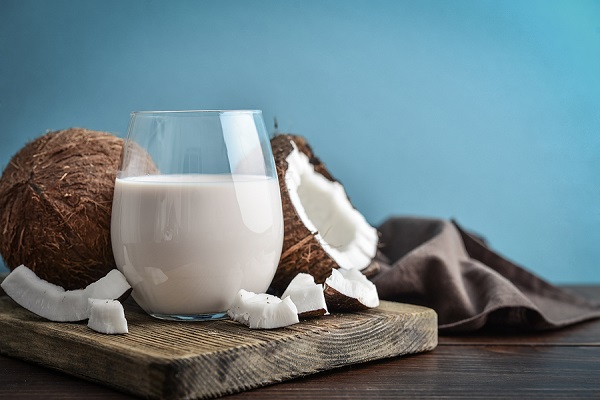 Studies suggest that coconuts originated in Southeast Asia and in islands off of the Indian subcontinent. Portuguese traders brought the coconuts grown within the Indian Ocean to the West Coast of Africa then to the Caribbean and Brazil as they colonized America. Austronesian people used to travel east to the Pacific Coast of Central America, bringing the coconuts that originated in Southeast Asia with them as they went, long before colonization. As many as 2,000 years ago, coconut milk entered the cuisines of many cultures all over the globe.

People also further contributed to the spread across the Atlantic and now coconut palms grow in all subtropical coastal zones around worldwide.

Coconuts consist of sufficient amounts of saturated fat, but as compared to other nuts, they provide fat that is mostly in the medium-chain saturated fatty acids (MCFAs) such as dodecanoic acid. This medium-chain fatty acid called dodecanoic acid is transformed into a beneficial compound called monolaurin, an antifungal, antiviral and antibacterial that destroys a good sort of disease-causing organisms. It is therefore suggested that consumption of coconut milk may help protect the body from different infections.

Vitamin C: Vitamin C present 11% of the RDA in coconut milk. It is responsible for the development, growth, and repair of all body tissues. Wound healing absorption of collagen and iron absorption are some of the important functions of vitamin C.

Vitamin B9 or folate: Vitamin B9 presents 10% of the RDA. It is responsible for the production of red blood cells and white blood cells in the bone marrow.

Iron: Iron represents 22% of the RDA. Iron helps in the regulation of body temperature and boosts immunity.

Manganese: It is 110% of the RDA. It helps in the improvement of bone health and has strong antioxidant properties.

Copper: Copper amounts to 32% of the RDA. Copper is considered a trace element and liable for improved heart function, improves immune function, and bone health.

Magnesium: It is 22% of the RDA. This mineral is effective against diabetes, improves cardiovascular health, and boosts immunity.

Selenium: Selenium represents 21% of the RDA. It plays an essential role in better immune function.

Potassium: It is 18% of the RDI. Potassium plays an essential role in regulating fluid balance, nerve signals, and muscle contractions.

Effect on Metabolism and Weight loss:

Unlike longer-chain fatty acids, MCTs go from the alimentary canal to your liver, where they’re used for energy or ketone production. They’re less likely to be stored as fat

Studies report that triglyceride levels and cholesterol levels may improve with coconut intake. Although, coconut milk is rich in saturated fat, it increases the good HDL levels as well.

Studies indicate that the lauric acid found in coconut milk helps in fighting against bacteria and viruses present in the mouth.

In one study it was reported that coconut milk reduces the size of stomach ulcers by 54% in rats.

Many canned linings contain bisphenol A (BPA), which causes reproductive problems and cancer in the animals. Hence, when you consume coconut milk it is recommended to use canned-free packaging.

Coconut milk contains a high amount of fermentable carbs. These carbs can cause irritation in the digestive tract such as diarrhea, or constipation in people with irritable bowel syndrome.

Coconut Milk on The Candida Diet

The following nutrition information is provided by the USDA for 1 cup of coconut milk.

Looking at the USDA data above 6.4g of carbs is more than acceptable on the Candida diet. Taking a look around the internet for the glycemic index produces anywhere from 10 all the way up to 97 with a few websites, such as WebMD, saying 42 to 47. Quite frankly, looking at the carb amount above at 6.4g the truth is more than likely around 42.

However, the label on the right is from a ½ gallon container of Unsweetened Silk Coconut Milk. It shows 1g of carbohydrates per cup which is more than acceptable on the Candida diet and at that low amount, the glycemic index is more than likely 10.

The Regular Silk Coconut Milk has 5g of sugar added bringing the total carbohydrates to 6g. That level is also acceptable because you have to have some carbs everyday to maintain red and white blood cell function. Those white blood cells are part of your immune system and you need it to work right. We suggest you get 50 to 60 grams of carbs per day so if you are going to drink the sweetened variety, just add those carbs to your daily totals.

As an added bonus, the lauric acid and monolaurin both kill candida yeast.

If you have any questions about candida yeast infections, please feel free to contact us from the contact page of this website or talk to your doctor.