Is Cheese Ok on The Candida Diet?

Cheese is a dairy product made primarily from cow's milk. It is a nutritious food comprising a variety of new textures and flavors.

According to ancient records, it was first discovered around 8000 BC. The cheese making process was discovered accidentally by an Arabian merchant who was storing milk in a pouch made from a sheep's stomach. Rennet in the pouch caused the milk to separate into whey and curd creating cheese. Rennet is an enzyme found in the lining of the stomach of ruminant animals. It is responsible for the coagulation of milk separating into curd and whey. (Source)

In the Middle East, Europe, and Central Asia, evidence of early cheese making is prevalent. It is believed that the art of cheese making was introduced to Europe by travelers from Asia. The cheese was made and improved by the monks in the monasteries of Europe and became an established food. Italy became the cheese making center of Europe during the tenth century. In 1815, the industrial production of cheese was introduced to Switzerland. In 1851, the first cheese factory was built in the United States by Jesse Williams.

More than one-third of the milk produced each year in the United States is currently used to produce cheese. In the last 50 years, cheese popularity has grown in the United States. Studies show that the consumption of cheese has increased by three-fold from 1970 to 2009. (Source) 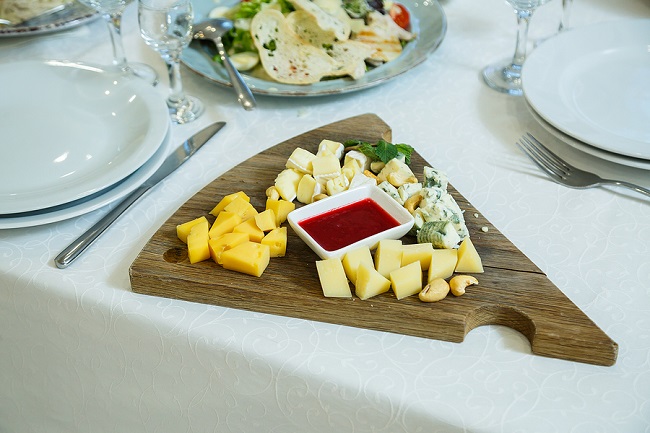 The important dietary component of cheese is calcium and protein. Besides this, fats, carbs, sodium, zinc, phosphorus, vitamin B12, and vitamin K are other important nutrients found in cheese. (Source)

Proteins are the building blocks of the body and play a major role in maintaining muscle strength. Cottage cheese contains a higher amount of protein as compared to other cheeses. Casein protein is one of the most important proteins present in the cheese.

Cheese is naturally low in carbs. Most types of cheese contain 1 gram of carbs. These carbs contain no dietary fiber.

The most commonly found vitamins and minerals in cheese are:

Calcium: Calcium is the main dietary component of cheese. Calcium is necessary to maintain bone and dental health.

Sodium: It conducts nerve impulses and maintains the proper balance of water and minerals.

Phosphorus: Helps build strong teeth and helps in the repair of body cells and tissues.

Vitamin B12: B12 keeps the nerve cells and blood cells healthy and helps in the synthesis of DNA.

It is reported in recent studies that cheese fortified with probiotic bacteria boost the immune system.

Like other dairy products, cheese is a rich source of calcium which is the main component of healthy bones. In addition to calcium, cheese also contains other nutrients including protein, zinc, magnesium, and vitamins A, D, & K. These nutrients contribute to bone development in children and young adults. Moreover, these nutrients also have a role in the prevention of osteoporosis.

Some people are sensitive to lactose present in cheese and other dairy products. Lactose intolerance is a condition in which a person’s body lacks the enzyme needed to break and digest the lactose (milk sugar). In such cases, too much lactose consumption leads to digestive problems such as bloating, diarrhea, or gas. However, hard cheeses have lower contents of lactose and can be safely consumed by lactose-intolerant people.

The abnormal immunologic reaction to certain milk proteins such as casein or whey can trigger an allergic reaction. Allergy symptoms include diarrhea, wheezing, and vomiting. People may develop asthma, bleeding, eczema, pneumonia, or shock in more serious conditions. A sensitivity to casein can trigger inflammation throughout the body. Symptoms include acne flares, skin rash, and migraines. All dairy products including cheese must be avoided by people allergic to milk. (Source)

Cheese and The Candida Diet

The following nutrition information is provided by the USDA for one slice (22g) of Swiss cheese.

A couple slices of American cheese is really close to the same amount of carbs as Swiss cheese containing 1g of carbohydrates, which is more than acceptable on the Candida diet. 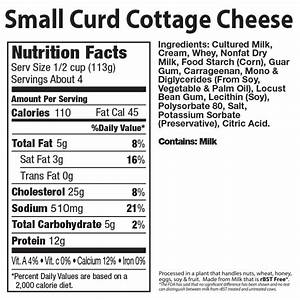 Looking at the label on the right of Cottage cheese, we see 5g of carbs for a ½ cup serving that is more than likely coming from the added corn starch. This is more than acceptable while following the diet. Just add those 5g to your total for the day.

However, usually cheeses are not suggested on the candida diet. The reason for this is because most people do not test themselves for Candida so because of the possible allergies, the diets suggest to avoid cheese. The most common cheese allergies that lead people to believe Candida's the problem are diarrhea, constipation, eczema, acne and other skin rashes.

So if you have not tested yourself for Candida it is best to avoid cheese for the first two weeks. Then add it back into your diet so you can monitor your reaction, if you have an allergic reaction, avoid it. No allergic reaction, because of the low carb content you can eat cheese on the Candida yeast diet. I would double check your labels on the cheese products you wish to consume because some manufacturers will often add sugar to the cheese which drives up the carb levels.

If you have any questions about cheese or yeast infections in general, please feel free to contact us from the contact page of this website or talk to your doctor.