Is Agave Nectar Ok on The Candida Diet?

Agave nectar comes from the agave plant (Agave Americana), which is a succulent broad-leafed plant from the Asparagaceae family. The agave plant is native to semiarid, arid, and hot regions of the Americas, particularly the Caribbean and Mexico. It is an edible plant.

Traditionally, it has been part of human culture and was used for medicinal purposes as well as in religious ceremonies in Nahuatl culture (1). In the 19th century, agave was used to produce organic sweeteners with the development of new techniques. Its stem is used as a source of agave nectar, a syrupy sweetener. It is used as a sugar alternative and is produced by extracting, filtering, and heating the sap of several species, particularly the century plant and blue agave. Agave is also used as a hair strengthener. A mixture of Agave nectar with oil provides strength and shine to hair and helps prevent hair loss.

The agave plant is a natural sweetener and approximately 10% of agave is used for agave syrup. The agave plants have been extensively used for a variety of purposes, especially in the regions where the genus is most diverse, such as Mexico. There are strong fibrous tissues in the leaves of many agave plant species. Fibers from its leaves are used to make textiles, ropes, sleeping mats, brushes, sandals, construction materials, and fuel. The stems of the agave plant are used to make needles. Agave spines were used as perforators during the bloodletting rituals of the ancient Maya (2). 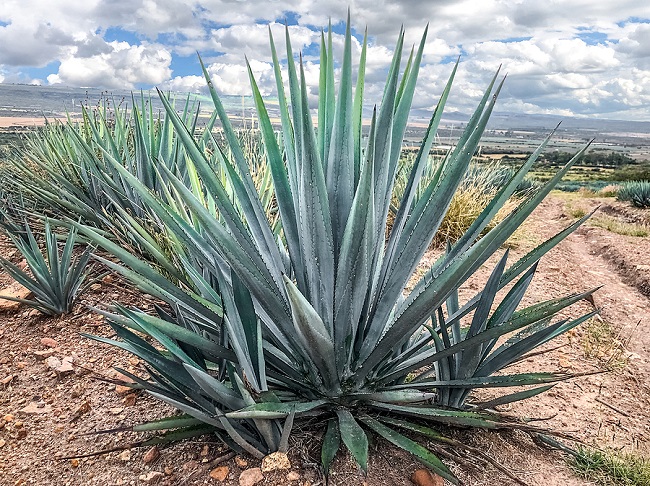 One serving of agave (100 grams) contains 310 calories (3). Agave is a rich source of carbohydrates and sugar and is commonly used as a sugar alternative. It also contains potassium, calcium, and fiber. These nutrients are necessary to support the body’s daily functioning. They contain only small amounts of proteins and fats.

One serving of agave contains 76 grams of carbohydrates, including 68 grams of sugar (3). Agave nectar has a low glycemic index because it primarily contains fructose. But consumption of large amounts of fructose results in an increase in triglycerides level. The thick stem or heart of the agave plant contains carbohydrates and is edible by humans.

One serving of agave contains 0.1 grams of protein (3), which is a very negligible amount of protein.

One serving of agave contains 0.5 grams of fat (3), which is a minimal amount of fat. However, a portion of agave fructose is converted into triglycerides. It is also very low in saturated fat. Consuming foods high in unsaturated fatty acids can improve blood cholesterol levels, which leads to lower the risk of heart disease.

Saponins present in agave nectar possess anti-wrinkling power (7) and are often used in cosmetics and hair products. They promote the hydration of hair and are resistant to fungus. Saponins also stimulate the synthesis of hyaluronic acid that further stimulates the fibroblasts to initiate the synthesis of skin cells. Many cosmetic products contain hyaluronic acid that softens and smoothens the skin. These antioxidants possess anti-aging activity and keep skin fresh and healthy (7).

Agave is a naturally occurring sweet syrup with a variety of health benefits. Agave nectar is one of the most delicious sweeteners that mostly contains fructose (8). The agave plant possesses anti-diabetic activity (9). A diabetic can consume fructose as recommended as its glycemic index is lower as compared to glucose. The agave plant possesses anti-cancer activity and prevents the growth of cancerous tumors (9). Agave is also a source of good fiber that prevents constipation. The agave plant is a low allergy food.

Agave nectar also contains antioxidants and glycolic acid (6). The agave plant contains phytonutrients that act as antioxidants. They help to keep skin fresh and reduce the inflammation of skin cells. The agave plant contains fructans and saponins with anti-inflammatory activity (9). So, they help to boost the immune system. It also contains inulin that reduces the appetite, increases the concentration of the nutrient of the body, and provides dietary fibers that regulate the digestive system (10). So, it is beneficial to replace sugar consumption with agave.

The agave plant has a role in maintaining metabolism. The agave plant contains Vitamin B6 which helps to break down food, specifically protein and carbohydrates (9).

The agave plant is beneficial for pregnant women as it contains vitamin B6. Vitamin B6 reduces morning sickness (12). Folate present in the agave plant helps to develop the baby's nervous system. Folate and vitamin K present also provide mental benefits as they reduce depression. Higher the Vitamin K levels lower will be the depression level. Vitamin B6 maintains a low homocysteine level that protects the heart from stroke and disease. Thus, the agave plant reduces the risk of cardiovascular diseases (9).

Agave nectar is a natural sweetener, but also some health-related risks are associated with it. It has more calories than common table sugar, excessive consumption of it can lead to obesity, diabetes, heart, and health-related issues. Agave should not be given to infants as their developing digestive system is not able to digest it properly. So, it can risk their health (13).

Agave extract is supposed to be harmful to sensitive skin and is unsafe for most people. For some people, direct exposure to the agave plant can cause swelling and redness of the skin. It can also lead to soreness of blood veins thus causing harmful impact to one’s skin. During pregnancy, excessive intake of agave nectar is very unsafe. It can stimulate the uterus and cause contraction that can affect the normal period of birth (13).

Agave Nectar on The Candida Diet

The following nutrition facts are provided by the USDA for 1 teaspoon (6.9g) of agave syrup.

Although a 100 gram serving of Agave nectar has 76 grams of carbohydrates and 68 grams of sugar, it has a low glycemic index because 96% of that sugar comes from fructose. Its typical glycemic index comes in at 10 to 19 depending upon the variety. Using the glycemic index of 19 the glycemic load would be 1.0, which is extremely low and would not cause a blood sugar spike.

Some suggest that fructose also feeds Candida yeast but this study points out that fructose may prevent the development of candidiasis, at least in the mouth of diabetics. However, due to the health risks of to much fructose consumption, we would be hesitant to use it exclusively and based on this research, would suggest xylitol as a better alternative.